Ted Brauch bounces from room to room to check on small groups of students who, as seniors in CBA Executive Banking School (EBS), are immersed in the final and toughest challenge of this unique executive education program.

“Are there any burning questions you have?” Brauch says to a team of five. Like their peers, they are engaged in a sort of virtual reality in which they must make a series of strategic decisions every day for the next week. Their goal is to revive a woefully managed, undercapitalized bank. In the process of the simulated exercise, the economy will shift. Students will be forced to think like executives about how to grow loans and deposits, manage interest rate risks, fix mounting credit problems, solve funding shortages and fend off competitive pressures from other banks. All while trying to create shareholder value. It will feel all too real.

“Avon calling!” Brauch says as he opens the door to another set of seniors huddled around a table. “In two hours and 11 minutes your decisions will be done, so you have a strategy and plan of action, right?”

Dressed in khakis, a sage golf shirt and sneakers, Brauch creatively encourages and guides students how to think through dilemmas. When one student asks whether regulators are more irritated when a bank reduces a dividend or issues more equity, Brauch responds with a question: “Obviously, you’re trying to add to your capital,” he says, “so how much capital are you talking about?”

As director of risk management at MainSource Financial Group in Greensburg, Ind., Brauch brings to his instruction at CBA EBS more than 30 years in banking. His depth of knowledge and experience is undeniable as he agilely fires off hypotheticals and artfully steers students to a solution.

Brauch is not alone. Although their teaching styles differ, what the CBA EBS program faculty share is the ability to bring an unparalleled “in the trenches” perspective to the learning environment as well as an unwavering dedication to students’ success. “Our job is not to give (students) the answer, but invoke the learning,” says instructor Cathy Myers, a consumer bank technology executive at U.S. Bank in Cincinnati and a nearly 30-year industry veteran.

Myers and other faculty meet regularly throughout the year to fine-tune the CBA EBS program curriculum. They gather days before the 10-day program starts to discuss how best to engage students and address anticipated obstacles learners may face. And they debrief after each day of the program to analyze how students responded and, if necessary, adjust the curriculum to best meet students where they are.

The expertise of the faculty is core to the program’s continued appeal. “The quality of the instruction,” is one characteristic that sets the CBA EBS program apart, says Luis Pardo, vice president and district manager at First Merit Bank in Travers City, Mich. “It’s just insane to hear about big movers in our industry, and a lot of these (instructors) interact with them or are them.”

“If you’re interested in being a student of your business,” says Pardo, who is in his second year of the program, “you’ve got to be a part of this.”

For Brauch, teaching rising stars from retail banks nationwide is his way of giving back to the program he graduated from in 1996. That’s also when he joined as a faculty member. Being a part of the program “keeps me sharp in my day to day responsibilities.”

As he makes his rounds in the Furman library where the senior teams are gathered in private rooms, he reiterates that it’s important for students to trust their instincts and to not allow their perspective to be muddled by the pressure of the tight deadlines the exercises impose. “Hope is not a strategy!” Brauch reminds them. And, that they don’t have to be the biggest bank to be successful: “Volume is vanity. Profit is sanity.”

Meanwhile, elsewhere on campus during the week, instructors Allison Gambucci and Maureen Sullivan take on the role of CEOs as they check in on second-year student teams. Five teams comprise the imaginary community Gambucci and Sullivan oversee. Each is in the midst of deciding its marketing budget and how to best serve its target market to help resuscitate an underperforming virtual bank they have inherited as part of the exercise. Like the seniors, they will soon learn the result of their first round of decisions.

“My personal measure of success is, did the bankers learn anything,” not the performance of their virtual bank, says Gambucci, a 2006 graduate and division sales director for Citibank in Redwood City, Calif.

One of the groups she and Sullivan are coaching has decided on the branding tagline, “Making Your Money Work.” They inform their CEOs that they have allocated $10 million for marketing and have $1 million in reserves to apply to product development.

“What should we expect to see tomorrow?” Gambucci asks, alluding to the outcome of their decisions against other banks in the community.

“We don’t expect to be No. 1,” says Erica McDowell, a finance manager with Wells Fargo Bank in Charlotte. “ We expect to be middle of the pack, but we’re spending money now for the future.”

For McDowell and other second-year students, the first set of results is delivered on a wood-paneled wall at 5 p.m. A program staff member tapes to what has become known as “The Wailing Wall,” four rows of paper showcasing each bank team’s scorecard – essentially, each virtual bank’s health relative to several CBA-designed metrics around sound bank management.

Another takes pictures of the results on a smart phone and emails it to his team.

“We’re No. 2 of five … we got the most assets, too,” a student says to his teammate. The two slap palms in celebration.

They will return to this wall time and again during the program as they continue to strategize, analyze and learn to think like leaders, to think holistically about the business of retail banking. The results of their decisions will fluctuate as they compete for customers’ attention in an evolving marketplace. Just like the real world.

“I hope,” one student says, “we’ll be high-fiving tomorrow.” 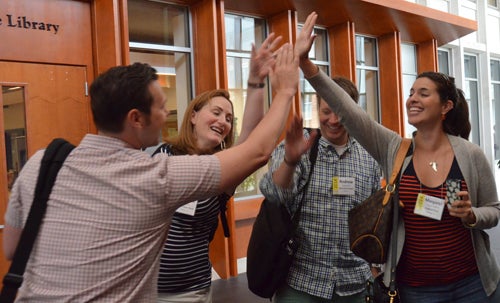