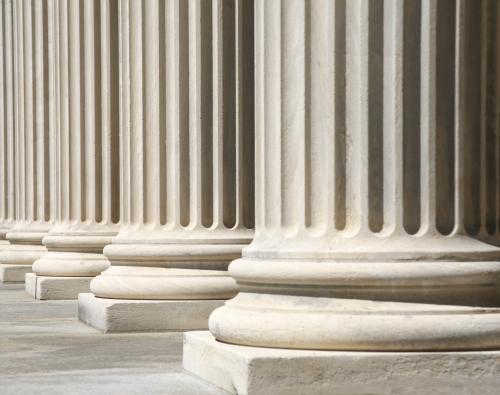 Another Constitutionality Challenge Filed Against the CFPB
PHH Corporation on Friday, June 26, 2015 filed a Motion for Stay Pending Judicial Review with the D.C. Circuit Court of Appeals (Court) seeking to stay a final action of the CFPB scheduled to take effect on Wednesday, August 5, 2015. On Monday, August 3, 2015, the Court granted PHH's motion, finding the company had "satisfied the stringent requirements for a stay pending appeal." Not only did the motion challenge the CFPB decision, but it also challenged the constitutionality of the sole director. Notably, the motion argues "[t]his brazen disregard for judicial authority, agency precedent, and fair notice is a symptom of the larger constitutional problems here. The CFPB places legislative, executive, and judicial power all "in the same hands" of a single person—what James Madison called "the very definition of tyranny."

Prompting the motion, CFPB Director Richard Cordray previously affirmed the Administrative Law Judge's (ALJ) decision against PHH, but increased the damages from the ALJ's recommended $6 million to $109 million and created additional injunctive relief. In the decision, Director Cordray justified the increased damages by concluding PHH violated RESPA every time it accepted a reinsurance payment, instead of each time it closed a loan.

CFPB Asks for More Information on Debt Collection
Earlier this week, the CFPB's Office of Research and Markets sent a survey to debt collection firms and servicers to continue gathering information for the Bureau's upcoming rulemaking. In the cover letter, the CFPB explained information from the voluntary survey will be used to "better understand the benefits and costs of various policy proposals," and will be followed up with phone interviews. Among other topics, the survey inquires about employees, revenue from debt collection, age of debt collected, and use of first or third party debt collection.

In May, the CFPB launched a request for information "into student loan servicing practices that can make paying back loans a stressful or harmful process for borrowers," according the agency's press release. Additionally, on Wednesday, July 22, 2015, the CFPB ordered Discover to pay $18.5 million for illegal private student loan servicing practices. The CFPB found Discover to be engaging in illegal debt collection procedures, overstating minimum amounts due on billing statements, and denying consumers information for their federal income tax benefits.

CFPB Takes Action Against Offshore Lender
On Tuesday, August 4, 2015, the CFPB announced filing a lawsuit in federal district court against the NDG Enterprise, a complex web of commonly controlled companies, for allegedly collecting money consumers did not owe. The CFPB alleges the defendants illegally collected loan amounts and fees that were void or that consumers had no obligations to repay, and falsely threatened consumers with lawsuits and imprisonment. The CFPB seeks to end the companies' alleged illegal practices and obtain monetary relief for consumers.

CFPB Provides Guidance on Private Mortgage Insurance Cancellation and Termination
The CFPB on Tuesday, August 4, 2015, issued a bulletin providing guidance to mortgage servicers regarding the cancellation and termination of private mortgage insurance. The bulletin explains certain requirements of the Homeowners Protection Act and is intended to help servicers comply with the law. The CFPB has reported industry confusion over implementation of the private mortgage insurance (PMI) cancellation and termination requirements in the Homeowners Protection Act. The CFPB claims examinations have identified violations of several different provisions of the Act.

"Consumers should not be billed for unnecessary private mortgage insurance," said Director Cordray. "We will continue to supervise mortgage servicers to ensure they are treating borrowers fairly, and today's guidance should help servicers come into compliance with the Homeowners Protection Act."

CFPB Reports on eClosing Pilot Study
On Wednesday, August 5, 2015, the CFPB released a report on its "Know Before You Owe" eClosing project, which attempts to gather data on how to simplify the closing process for consumers, while providing them with better organized information and more time to review it. In completing this pilot, the Bureau worked with lenders, consumers, technology companies and real estate professionals over a four month period.

According to the report, the study found that eClosings were "associated" with:

"While technology alone will not address all consumer concerns in the closing process, our study showed that eClosings do offer the potential to make the process less complex," said Director Cordray. "We expect this pilot project and its findings to help inform further innovation that will be a win-win for consumers and industry alike."

CBA Supports Passage of Cyber Bill, Data Security Legislation
On Tuesday, August 4, 2015, CBA along with the Credit Union National Association, the Independent Community Bankers of America, and the National Association of Federal Credit Unions sent a letter to Majority Leader Mitch McConnell and Minority Leader Harry Reid in support of passage of S.754, the Cybersecurity Information Sharing Act (CISA). The letter read, "we urge you and your colleagues to bring up and pass this important legislation as it will increase the nation's ability to defend against cyber-attacks by encouraging businesses and the government to share cyber-threat information more quickly and efficiently between the two sectors." In addition, the letter encouraged Senate leadership to take further steps "to protect consumers' sensitive information from the scourge of data breaches," specifically citing the merits of the Data Security Act of 2015 (S. 961).

CISA was approved on a near-unanimous and bipartisan basis by the Select Committee on Intelligence in March. On Monday, August 3, 2015, Leader McConnell filed a procedural motion to move to the bill; however, an agreement on amendments could not be reached to allow consideration of the bill during the Senate's last week of summer session. The parties did agree to move to the bill and allow nearly two dozen amendments at some point in the fall. Meanwhile, a group of Senators has been working towards achieving a bipartisan compromise data security and breach notification legislation.

ATM Fee Lawsuit Revived
The U.S Court of Appeals for the District of Columbia on Tuesday, August 4, 2015 revived litigation against Visa, Mastercard, Bank of America, Chase and Wells Fargo. The action accusses the parties of conspiring to inflate the prices of ATM access fees in violation of antitrust law. The Court of Appeals found that the district court erred when it concluded that consumers had no standing to sue and had not adequately alleged antitrust violations. It remanded three consolidated lawsuits back to the district court for further proceedings.

The OCC Creates Risk Office and Appoints Chief Risk Officer
On Wednesday, August 5, 2015, the Office of Comptroller of the Currency (OCC) announced the creation of the Office of Enterprise Risk Management and new position to head the office – the Chief Risk Officer (CRO). The first CRO, Linda Cunningham, will oversee the office with the goal of enhancing the agency's "communication, collaboration, and transparency of enterprise-wide risks and its strategies to mitigate those risks."