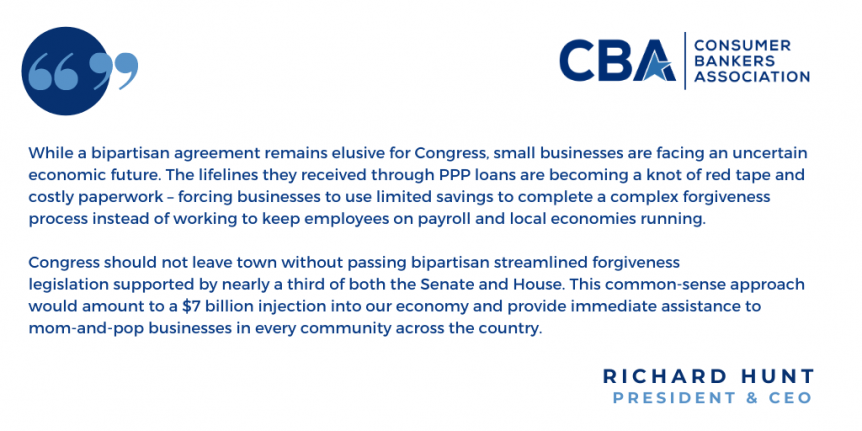 “While a bipartisan agreement remains elusive for Congress, small businesses are facing an uncertain economic future. The lifelines they received through PPP loans are becoming a knot of red tape and costly paperwork – forcing businesses to use limited savings to complete a complex forgiveness process instead of working to keep employees on payroll and local economies running.

“Congress should not leave town without passing bipartisan streamlined forgiveness legislation supported by nearly a third of both the Senate and House. This common-sense approach would amount to a $7 billion injection into our economy and provide immediate assistance to mom-and-pop businesses in every community across the country.”

NOTE: Sens. Kevin Cramer (R-N.D.), Bob Menendez (D-N.J.), Thom Tillis (R-N.C.) and Kyrsten Sinema (D-Ariz.) and Reps. Chrissy Houlahan (D-Penn.) and Fred Upton (R-Mich.) have introduced legislation S. 4117 and H.R. 7777 streamlining forgiveness of PPP loans less than $150,000 if the borrower answers a simple, one-question attestation the funds were used in accordance to PPP guidelines to retain employees. Nothing in the legislation prevents the audit of PPP loans less than $150,000 for fraud. According to independent analysis by AQN Strategies, simplified or automatic forgiveness could collectively save the smallest small businesses owners more than $7 billion dollars and hours of paperwork.