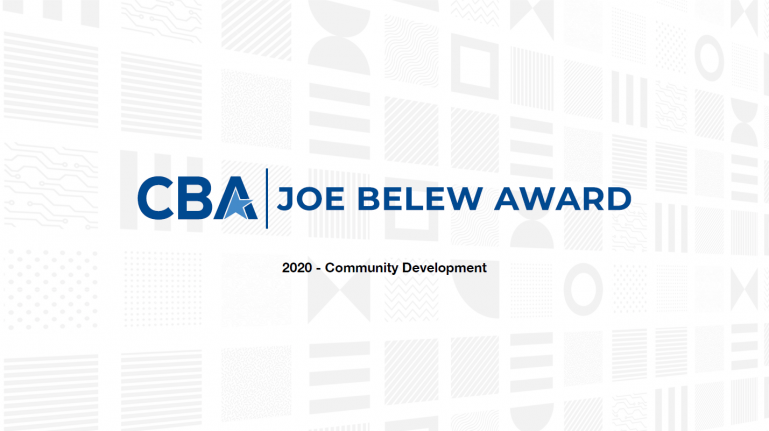 WASHINGTON, D.C.  – The Consumer Bankers Association (CBA) today presented the tenth annual Joe Belew Award to BMO Harris Bank and IBC Bank. The 2020 Joe Belew Award was presented to the CBA member-bank applicants with the most innovative and impactful community development programs. In keeping with the theme of CBA LIVE 2020 and its promise of “something more,” CBA requested programs showcasing creative, outside-of-the-box community development initiatives serving their areas.

A record 15 entries were submitted this year. This was the first time both banks have won the Joe Belew Award, recognizing each bank’s outstanding community development efforts. The programs BMO Harris and IBC Bank started demonstrate the remarkable ability of our nation’s banks to solve issues in a new way.

CBA President and CEO Richard Hunt said, “CBA members are committed to improving the quality of life in low- and moderate-income neighborhoods through affordable housing, economic development and other innovative solutions. This year, we are pleased to honor two banks – BMO Harris and IBC Bank – with the Joe Belew Award for their exemplary programs and thank them for their commitment to initiating top-notch community development efforts.”

Ernie Johannson with BMO Harris said, "At BMO, we consider it our responsibility to boldly grow the good in the communities we serve. Economic inclusion and strong, resilient neighborhoods go hand in hand. We are proud to partner with the United Way of Metro Chicago on a program that removes barriers to inclusion by working side-by-side with and listening to community leaders about how to sustainably revitalize their communities.”

Adrian Villarreal with IBC Bank said, “Since its inception in 1966, IBC Bank has been committed to their mantra of Doing More in the 187 communities we serve. Our most important asset is our youth. Enhancing their knowledge and skills for future success is our top priority. IBC Bank’s Minitropolis program has proven to be an inspiration for teachers and motivator for parents and encouragement for students to learn and succeed.”

The Neighborhood Network Initiative is a partnership facilitated by United Way of Metro Chicago to bring together multiple community groups in underserved neighborhoods to develop a community-led approach to the issues they face. Supported by both the public and private sectors, it will help ensure all residents can thrive.

BMO Harris Bank (BHB) was the cornerstone investor in 2013, committing $1.5 million to launch the initiative to build capacity for community coalitions and strengthen neighborhoods. The bank committed another $1.5 million in 2017. In 2019, BMO committed $10 million to United way for the next phase of this important work with a specific focus on the Austin neighborhood. The 2019 commitment is the largest corporate gift in United Way of Metro Chicago’s history.

What is unique and innovative about the Neighborhood Network in Austin is its scale and its focus on the community-led nature of engaging community residents from the beginning and putting together plans and agendas where the residents lead the change, goals and outcomes.  The community formed a lead agency, Austin Coming Together (ACT) to drive the collaboration, goals and impact in their neighborhood.

About the IBC Bank Minitropolis

IBC Bank's footprint includes some of the most impoverished communities, including many along the U.S.- Mexico border with large Hispanic populations and consistently high dropout rates. IBC Bank set out to help its schools and communities with a program that not only assists schools in addressing attendance issues but also provides students with real-life skills.

The Minitropolis® program concept was created by IBC Bank in 1996. The concept was first executed in McAllen, Texas at Sam Houston Elementary School as a tool to help teachers impart the importance and significance of financial literacy at a young age. IBC Bank believes that if we expose children to financial concepts early on, students will be better prepared to make wiser financial decisions throughout their lives.

The program mirrors a fully functioning community, providing a way for students to learn the significance of financial literacy and create an academic experience. The goal is for students to master the basics of financial literacy, understand the importance of saving money and credit ratings as well as learn leadership skills in real- life scenarios.

The Joe Belew Award was established to honor former CBA President, Joe Belew, for his commitment to community development. The award encourages and recognizes the efforts of CBA member banks whose innovative solutions address pressing social and community issues. The focus of the Award changes annually, with past honors spotlighting job creation, financial inclusion, digital access to financial services and low- and moderate-income housing programs. The 2019 Joe Belew Award honored the applicant with the most innovative and impactful small business initiatives.