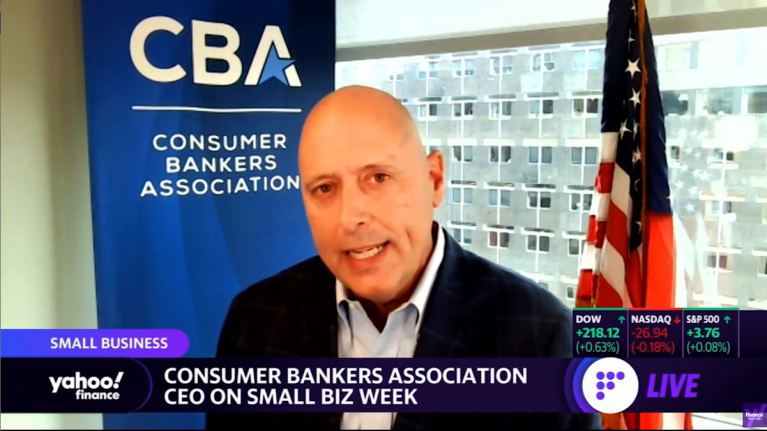 During an interview with Yahoo Finance, Hunt touted the critical role banks played during the pandemic and will continue to play in supporting the nation’s small and franchised businesses, stating:

“I thought this was the best of America. The United States government creating a program, the Paycheck Protection Program, working with banks and helping small businesses save about 90 million jobs. Normally, this program would have taken anywhere from 12 to 18 months to implement, but we did it in a matter of days, working around the clock, many of the bankers at their kitchen table or in their makeshift bedroom offices to help.”

Commenting on what lessons can be learned from the ingenuity and perseverance displayed by the nation’s small and franchised businesses in the face of the COVID-19 pandemic, Hunt said:

“You had to adjust over the last 18 months, just like small businesses do each and every day. You have to throw out the playbook. The playbook may be different this November, this December than it was last year. […]  Every region of the country is different. There's not a playbook for all 50 states. What works in Oregon may not work in Maine. […] So the key word is being adaptable through the current trends.”

You can watch the full interview HERE or by clicking the image above.

CBA also released a new ad and a new website yesterday highlighting the #SmallBusinessSpotlight – a joint video series unveiled in May with the International Franchise Association (IFA), the National Association of Women Business Owners (NAWBO) and the U.S. Hispanic Chamber of Commerce (USHCC) showcasing how banks and small businesses worked together to save jobs, support their communities and drive America's economic recovery forward throughout this pandemic.

“Take time this week to visit a small business and thank them for the sacrifices they have made during this economic crisis. They have shown tremendous ingenuity and leadership to safely reopen and remain open. Thanks to bankers, American small businesses remain strong, resilient, and poised to lead our economic recovery.”

You can read the full op-ed HERE or below:

This year, National Small Business Week means something more and the Consumer Bankers Association, International Franchise Association, National Association of Women Business Owners and U.S. Hispanic Chamber of Commerce are joining forces to acknowledge the perseverance of our nation’s 30 million small and franchised businesses, as well as the indelible role America’s leading banks have played to support them during this economic crisis.

Small and franchised businesses contribute nearly 45 percent of the nation’s economic output and employ almost 60 million of our friends, neighbors and family members. At the onset of the COVID-19 pandemic, millions of small and franchised business owners across the country were forced to implement staffing changes or shutter their operations altogether at no fault of their own.

Thankfully, with the passage of the Coronavirus Aid, Relief, and Economic Security Act in March 2020, America’s leading banks immediately mobilized to help local businesses in the communities they serve. Banks devoted significant time and resources to stand up and administer one of the most successful emergency relief programs in American history — Paycheck Protection Program — ensuring small and franchised businesses could keep their doors open, their lights on and employees on the payroll.

In coordination with the U.S. Small Business Administration, large banks administered more than 4 million PPP loans, accounting for over $400 billion and making up more than half the total dollar amount lent through the entire program. Ultimately, the PPP helped protect more than 90 million small-business jobs and saved nearly 20,000 locally owned franchises.

As with any program of this magnitude, issues arose during the rollout and implementation of the PPP that left some small and franchised businesses grappling with technical glitches, eligibility requirements and ever-changing guidance. Together, we were proud to work with the SBA to resolve these, including simplifying the forgiveness process for loans less than $150,000, amounting to the equivalent of $7 billion in additional relief. To date, more than 80 percent of PPP loans administered in 2020 have completed the forgiveness process. As more 2021 PPP borrowers begin seeking forgiveness, our organizations remain fully committed to ensuring every small and franchised business participating in the PPP receives the relief they deserve.

Recognizing the lasting economic impact of the pandemic on small and franchised businesses, some of the nation’s largest financial institutions — including Wells Fargo, Bank of America and Citigroup — are reinvesting PPP fee income to nonprofit programs designed to help them rebuild. Through its Open for Business Fund, Wells Fargo has already contributed over $420 million to fuel the growth of minority-owned small businesses in low- and moderate-income neighborhoods across America, while other banks including PNC and Truist have announced similar initiatives aimed at spurring a sustainable and equitable recovery across every community they serve.

From gyms and salons to restaurants and factories, the effects of the PPP and the role of bankers in the process were felt by small and franchised businesses of all shapes and sizes, including the Braswell Child Development Center in Dallas, Texas, whose enrollment plummeted 80 percent during the pandemic. As Murriel Webb, CEO of Braswell’s parent company said, “We, however, were able to sustain our employees here simply because we worked closely with Comerica Bank as they guided us through the process to successfully secure the PPP loan.”

When Liscio’s Italian Bakery in New Jersey received its PPP funds, owner Charles Vilotti expressed a similar sentiment, stating “we like to say that banks are these places that give you umbrellas when it stops raining, [TD Bank] gave us an umbrella, almost at the first sign of rain.”

And thanks to its bilingual programs, USHCC was able to connect Mestizo Mexican Cuisine — a family-owned restaurant in Charlotte, North Carolina — with bankers who provided the PPP loan that ultimately prevented employees from losing their jobs and struggling to make ends meet.

For well over a century, the nation’s leading banks have financed the American Dream for small and franchised businesses in every community they serve. This commitment was reaffirmed over the course of the last 18 months and continues today. Take time this week to visit a small business and thank them for the sacrifices they have made during this economic crisis. They have shown tremendous ingenuity and leadership to safely reopen and remain open. Thanks to bankers, American small businesses remain strong, resilient and poised to lead our economic recovery.