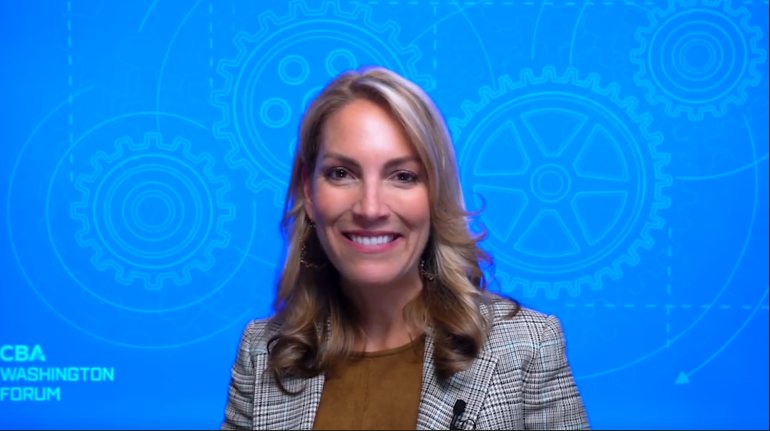 Today, at CBA’s 2022 Washington Forum, lawmakers, former regulators, industry experts, and the CBA Team weighed in on the most pressing policy issues affecting retail banks. From crypto, digitization, fintechs, and all things CFPB, the virtual event featured seven sessions and more than 20 speakers focused on what’s happening and what’s to come amidst a rapidly changing bank landscape and political environment in Washington.

In addition to Johnson, some of this year’s featured speakers included:

Rep. Andy Barr (R-KY) on what the top priorities will be for Republicans in the House Financial Services Committee next Congress:

“There's going to be an overarching focus on oversight of the Biden administration. […] That means the prudential regulators, the Federal Reserve, as we continue to monitor their tightening program and the inflation crisis. And then, for your audience, a whole lot of oversight over the Consumer Financial Protection Bureau.”

Barr also remarked on the need for policymakers to protect consumers’ access to overdraft:

Rob Morgan, CEO of the USDF Consortium on how Republicans in the new Congress will approach crypto and potential legislation to establish regulatory parameters for all stablecoins:

“It's notable that Patrick McHenry [has] been a vocal proponent of digital assets for a number of years. He's also shown the willingness to work on a bipartisan basis to explore things like stablecoin legislation that we've been talking about. On Senate Banking, Senator Tim Scott [has] been much more of a proponent for traditional small business and other bread and butter banking issues. [Their engagement in this space] will determine a lot of what legislation looks like.”

“Payments are going to become more costly [and] restricted. […] Instead of consumers getting money through Zelle into their account in real time, there's going to be a delay and we're not going to have real time payments anymore. So, you've got a host of knock-on effects from […] making banks responsible for things that they don't control that you've got to think about before you go down that path.”

Andrea Mitchell, Managing Partner at Mitchell Sandler, on what to expect from the CFPB in regard to future enforcement actions:

“There are some issues that will make their way to enforcement because they feed into the overall mission and objectives of this particular CFPB. […] We're going to see some more COVID-related enforcement actions and racial equity will continue to be top of mind. So, they'll be looking for cases involving […] the big players and things that feed into their message about protecting people impacted by COVID and racial equity.”

John Pitts, Head of Policy at Plaid on how the market is responding to the Section 1033 SBREFA outline released by the CFPB:

“I've found it quite refreshing and surprising […] how much agreement there is between banks and aggregators on what the good elements of this are and where more work still needs to be done. […] I think it's really clear now that not only is this happening, but it is a very high priority for the bureau. And the timeline the Director laid out is fairly quick.”

Gary Stein, Partner & Chief Portfolio Officer at 99FinTech on the advantages traditional banks benefit from as compared to fintechs in an increasingly competitive financial marketplace:

“Banks still have some core advantages in this world by having insured deposits, low cost of capital, and direct access to legacy payment systems that […] fintechs aren't going to be able to have. […] That balance sheet, that efficiency, and really that regulatory experience is something they have as an asset to offer fintechs.”

Stein also commented on what the future holds for partnerships between banks and fintechs:

“There's a lot of things that inhibit brilliant ideas in the fintech world from ever coming to fruition because they're just not building an organization that's ready for prime time. […] I would expect to see more traditional banks developing capabilities and appetite to work with [these firms]. Those fintechs that embrace that type of relationship are going to be the ones that succeed first.”

To view the full program schedule and learn more about these topics and speakers, click HERE.

Special thanks to our 2022 CBA Washington Forum Sponsor, VISA.