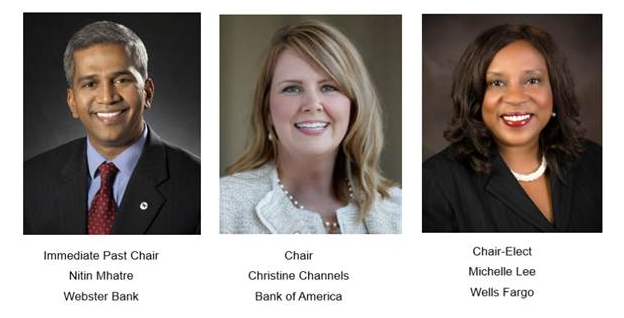 WASHINGTON – The Consumer Bankers Association (CBA) has elected Christine Channels, Head of Community Banking and Client Protection at Bank of America, as Chair of the Board of Directors and Michelle Lee, Executive Vice President, Head of Eastern Region, Consumer Banking at Wells Fargo, as Chair-Elect. Terms for CBA’s Board of Directors coincide with the October to September fiscal year.

CBA Board Chairwoman Christine Channels said, “Established more than 100 years ago, CBA is the voice of retail banking. I am proud to have been selected as this year’s Chairwoman and am committed to working with my fellow Board members to continue focusing on the important issues facing our industry today.”

Channels succeeds Nitin Mhatre, Executive Vice President, Head of Community Banking and Marketing at Webster Bank. Mhatre will remain on the Board as Immediate Past Chair. Mhatre, Channels and Lee will comprise CBA’s Administrative Committee, which is charged with oversight of CBA’s operations.