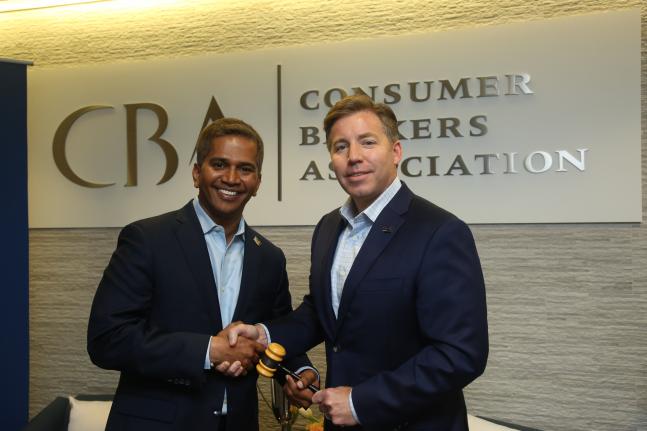 Todd Barnhart of PNC (right) today presented Nitin Mhatre of Webster Bank (left) with the CBA Board Chair gavel during CBA’s September Board Meeting. Mhatre will serve as CBA’s Board Chairman for the next year and Barnhart will remain on the CBA Board of Directors as Immediate Past Chair. Dennis Devine with KeyCorp was elected Chair-Elect. Mhatre, Barnhart and Devine will comprise CBA’s Administrative Committee, which is charged with oversight of CBA’s operations.

CBA Board Chairman Nitin Mhatre said, “I’m honored to be selected as CBA’s Chairman. It is more important than ever to ensure consumers have well-regulated banking options, and we will use our collective voice in efforts to help our nation’s economy grow. I look forward to working with the Board as we engage with key stakeholders and advocate on behalf of CBA’s membership.”

CBA President and CEO Richard Hunt said, “CBA’s success is a direct result of our membership and our Board of Directors is second-to-none in serving the retail banking industry by promoting sound policy and preparing the next generation of bankers. Just coming off our 100th anniversary, our goals this year reflect our industry’s commitment to serving consumers and ensuring regulations allow banks to keep up with the demands of our customers.”

Mhatre succeeds Todd Barnhart, Executive Vice President and Retail Distribution Executive at PNC Bank. Barnhart will remain on the Board as Immediate Past Chair. Mhatre, Devine and Barnhart will comprise CBA’s Administrative Committee, which is charged with oversight of CBA’s operations.

In addition to electing Mhatre and Devine to their respective leadership positions, the Board also approved CBA’s priorities for the upcoming year:

CBA’s full list of Board Members for the upcoming year is below: