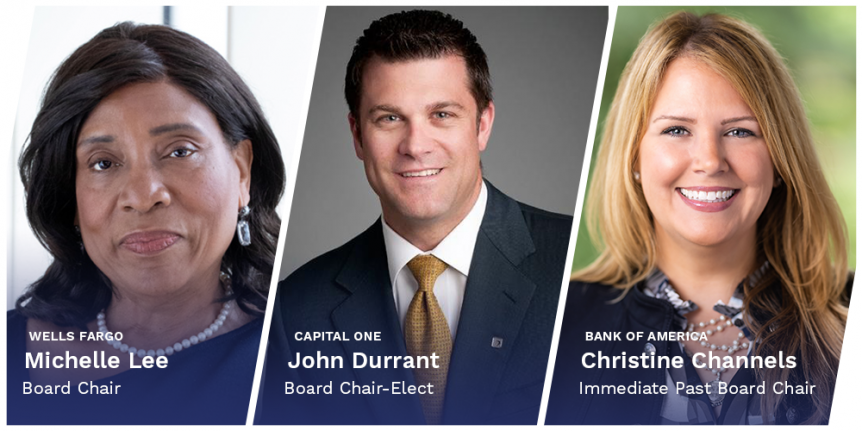 WASHINGTON – The Consumer Bankers Association (CBA) has elected Michelle Lee as Chair of its Board of Directors. Lee serves as Regional Banking Executive, Branch Banking at Wells Fargo and assumes the role of Chair following the successful tenure of Christine Channels, Head of Community Banking and Client Protection at Bank of America. Channels will remain on the Board as Immediate Past Chair, succeeding Nitin Mhatre, President & CEO of Berkshire Hills Bancorp, who will continue as a member of the Board. John Durrant, EVP, Retail and Small Business Banking at Capital One was also named as Chair-Elect for the upcoming year. Lee, Channels, and Durrant will comprise CBA’s Administrative Committee, which is charged with oversight of the CBA enterprise.

CBA President and CEO Richard Hunt said: “CBA is proud of the important role our membership and Board of Directors have played in promoting sound policies that have proven to be a lifeline for so many of their customers over the past 18 months. Thank you to Christine Channels for her steadfast leadership over the past year and congratulations to Michelle Lee, who has broken barriers throughout her banking career as CBA's first female minority Board Chair. I am confident Michelle will continue to advance CBA’s position as an invaluable asset to the industry, ensuring America’s leading retail banks – and the small businesses and consumers they serve – are poised to thrive for years to come.”

CBA Board Chair and Regional Banking Executive, Branch Banking at Wells Fargo Michelle Lee said:“CBA is the voice of America’s retail banks. This pandemic has proven how vital banks are in the lives of families and small businesses across the nation. I am honored to serve as Chair of the CBA Board of Directors and look forward to working with my fellow Board members to deliver on our mission of helping consumers achieve their American dream. As our nation grapples with lingering economic uncertainty, CBA remains fully committed to advocating on behalf of the millions of customers our members serve every day, and I look forward to helping lead that effort.”

Immediate Past Chair of the CBA Board and Head of Community Banking and Client Protection at Bank of America, Christine Channels said: “Serving as Board Chair at CBA for the past year has been a tremendous privilege and I am grateful to the entire CBA Board for their dedication. The public health and economic crisis pushed CBA, like all our banks, to be nimbler and more strategic than ever before, and adapt to constantly changing circumstances. Amidst these challenges, bankers moved heaven and earth to support their customers across every community they serve. The role of CBA as a trusted resource for our industry has never been greater and I look forward to watching the organization continue to flourish under Michelle’s leadership.”

Click HERE or the image below to watch “Passing the Gavel,” a conversation about leadership with Michelle and Christine.

Michelle Lee leads all of Wells Fargo’s Branch Banking regions and manages approximately 4,900 banking branches and more than 41,000 employees in 36 states and the District of Columbia.

Previously, she was responsible for Branch Banking for the Eastern Region. Prior to that role, Michelle was a Community Banking lead regional president and provided executive leadership for retail and small business operations in the Northeast.

A 37-year company veteran, Michelle joined Wells Fargo, (formerly Wachovia) as a teller in 1984. Throughout her tenure, she has taken on leadership roles of increasing responsibility.

As an active member of the community, Michelle currently serves on the boards of Novant Health Southern Piedmont Region, Blumenthal Performing Arts, Johnson C. Smith University, a historically Black college and university, and the Harvey B. Gantt Center for African-American Arts and Culture. She is also the Chair of the Consumer Bankers Association Board of Directors and previous Chair of the organization’s education council. Past board memberships include Junior Achievement USA and of New Jersey, the Alvin Ailey Dance Foundation, the New Jersey Performing Arts Center, Greater New York YMCA, Select Philadelphia, Alliance for Lupus Research and Opera Carolina.

Michelle has also been recognized by 100 Black Men of America, Executive Women of New Jersey and was selected for inclusion in the 2009 edition of Diversity Profile’s Women to Watch.

Michelle is a graduate of the Boston Conservatory of Music where she earned a Bachelor Degree in Music, Applied Voice.

ABOUT CBA’S BOARD OF DIRECTORS

Terms for CBA’s Board of Directors coincide with the October to September fiscal year. CBA's Board consists of senior retail banking executives at the nation’s leading financial institutions. In addition to announcing new leadership positions, the Board reaffirmed CBA’s priorities, which are determined every two years, for the upcoming year:

Consumers are best served within the well-regulated, well-capitalized, safe and sound banking industry. CBA will highlight those benefits and work to bring about modern banking regulations to allow banks to offer products and services to more consumers, including the un-and under-banked, in a way which meets their unique needs.

CBA will advocate for policies to ensure the continuation of a vibrant and strong consumer and small business banking sector. CBA will also work to create a level playing field, especially regarding consumer protections, with banks and non-bank financial companies.

CBA will promote industry initiatives to achieve racial and gender equality and the availability of banking services to all communities. We will strive for diversity among CBA activities and programs including our communities, our Executive Banking School, along with deliberate hiring decisions and advancement opportunities.

CBA will work hand-in-hand with member institutions to promote the work being done to keep customers financially stable and serve as a constant source of breaking information necessary to navigate the ever changing legislative, regulatory and operational environment brought about by COVID.