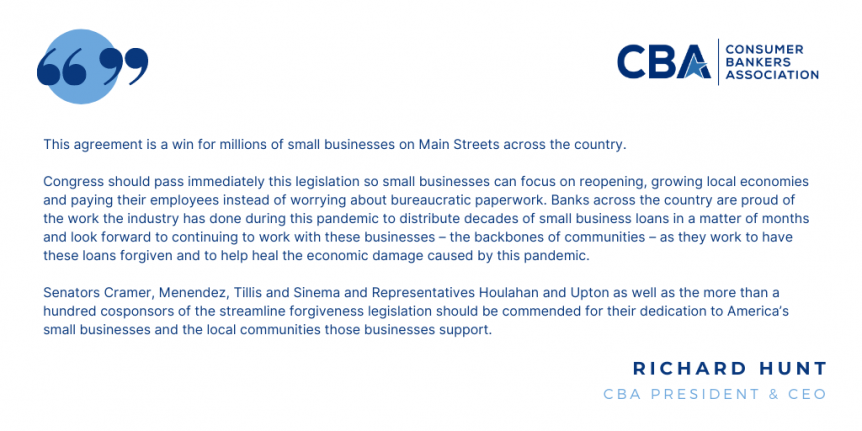 “This agreement is a win for millions of small businesses on Main Streets across the country,” said CBA President and CEO Richard Hunt. “Congress should pass immediately this legislation so small businesses can focus on reopening, growing local economies and paying their employees instead of worrying about bureaucratic paperwork. Banks across the country are proud of the work the industry has done during this pandemic to distribute decades of small business loans in a matter of months and look forward to continuing to work with these businesses – the backbones of communities – as they work to have these loans forgiven and to help heal the economic damage caused by this pandemic.

“Senators Cramer, Menendez, Tillis and Sinema and Representatives Houlahan and Upton as well as the more than a hundred cosponsors of the streamline forgiveness legislation should be commended for their dedication to America’s small businesses and the local communities those businesses support.”

According to independent analysis by AQN Strategies, simplified or automatic forgiveness could collectively save the smallest small businesses owners more than $7 billion dollars and hours of paperwork.

CBA has been leading a coalition of more than 100 trade associations representing businesses, non-profits and lenders in calling on Congress to streamline PPP forgiveness to help the smallest businesses receiving PPP loans.