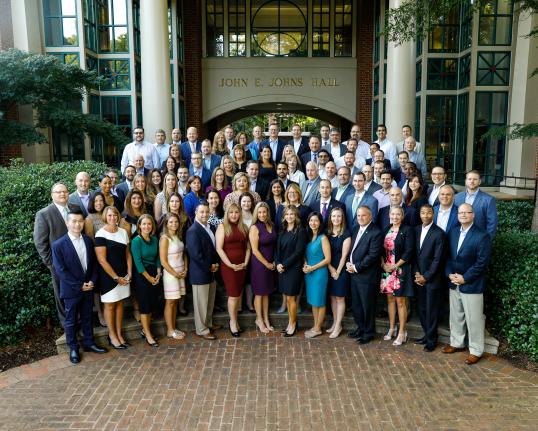 “The CBA Executive Banking School believes in the value of a comprehensive curriculum tailored and taught by top industry practitioners. After three, ten-day sessions filled with exercises revealing the core principles of successful bank leadership, I am confident today’s graduates are armed with the vital skills and perspectives to navigate the complexities of our ever-evolving industry. Retail banking is in great hands!”

Conti was selected by the CBA Executive Banking School faculty, with input from senior class peers, to receive the Tem Wooldridge Award. This prestigious honor recognizes the top student who demonstrates outstanding academic performance, high integrity and a strong work ethic. In addition to academic merit, Tem Wooldridge Award winners possess the necessary character and leadership skills to bring out the best in their teammates. Presented annually, the award was established to honor a now-retired faculty member.

Students participate in one-of-a-kind simulation exercises that challenge them to run the entire consumer business of a bank. They learn how to analyze and use financial data to influence a bank’s future performance and they dive into an executive level virtual experience that requires them to manage a bank from the top down. Students are anchored on a path to leadership and graduate with a deep understanding and appreciation of how various segments of banking are interrelated.