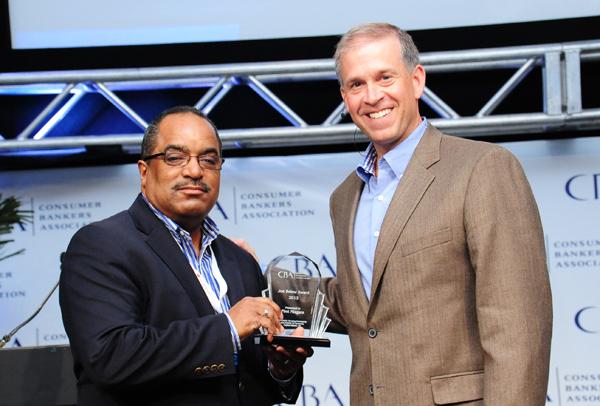 Incoming CBA Chair Andy Harmening, senior executive vice president at Bank of the West, presented the award in recognition of First Niagara’s Affordable Housing Partnership with Habitat for Humanity Capital District of Albany, N.Y. (HHCD). As the nonprofit partner of the winning bank, HHCD will receive $5,000.

Passionate dedication from First Niagara employees was cited by the selection committee in their decision, and recognized by CBA President and CEO Richard Hunt.

“The commitment of First Niagara’s employees to this outstanding project represents the vision for the retail banking industry Joe fought for each day,” Hunt said.

“We could not ask for a better partner to recognize with this prestigious award. The Albany community is fortunate to have First Niagara on their side.”

CBA also announced U.S. Bank as the runner up for the 2013 competition.

The Joe Belew Award was established in 2011 in memory of Joe Belew, former CBA president, to honor his commitment to community development. The award annually recognizes CBA member banks for their innovative community development programs related to housing or job creation. Discover Bank and Wells Fargo are past winners of the award.

Read a detailed description of the 2013 competitor programs on the Joe Belew Award Online Library at www.cbanet.org.

About Consumer Bankers Association
The Consumer Bankers Association (CBA) is the trade association for today's leaders in retail banking - banking services geared toward consumers and small businesses. The nation's largest financial institutions, as well as many regional banks, are CBA corporate members, collectively holding two-thirds of the industry's total assets. CBA’s mission is to preserve and promote the retail banking industry as it strives to fulfill the financial needs of the American consumer and small business.