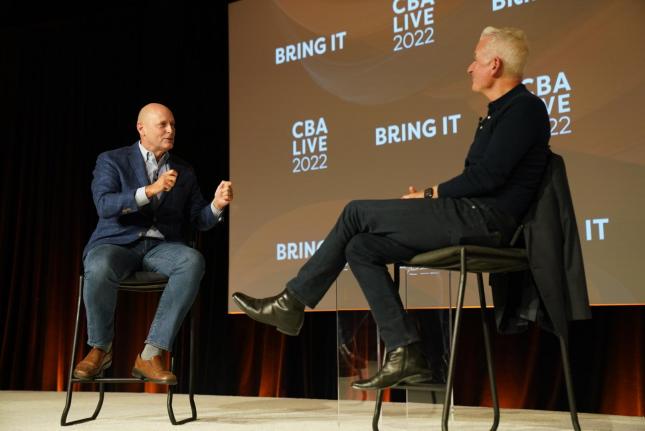 Day Two of CBA LIVE 2022 featured a discussion with Consumer Bankers Association (CBA) President and CEO Richard Hunt on key moments and accomplishments with the CBA family since he joined the organization in 2009.

Over the last 13 years, the banking industry faced historic challenges, from the financial crisis in 2009 through the COVID-19 pandemic. During this time, CBA became a valued resource to its members – America’s leading banks – helping them understand and adapt to regulatory, legislative, and competitive pressures.

Hunt, who in November 2021 announced his decision to depart the organization later this year, reflected on what CBA has meant to him, saying:

“Somewhere around 2009, you guys became my calling and I'm so glad you did. I cannot thank Joe Belew [former President & CEO] enough for leaving me a terrific, terrific organization. I’ve enjoyed literally, literally every single moment working at CBA. I cannot remember a day where I did not drive into the office not happy about what I was doing for a living.”

Through an overhaul of CBA’s mission and focus, CBA has tripled annual revenue, increased membership, realigned and revitalized its committee structure to tackle the industry’s most important issues, established CBA LIVE, and revamped CBA’s educational programs to prepare the next generation of diverse bankers to lead the industry.

Offering his advice for the organization’s next President & CEO, Hunt added:

“Make sure you surround yourself with great people – not good people – great people, people who will go to war with you […] in this environment. […] But what I told the Search Committee [is] you have to have communication skills and political skills and understand Washington. But, at the end of the day, you better find somebody who doesn’t have to be liked, because you’re not going to make it in this job if you do that. I’m sure there are regulators who aren’t always happy with me or Members of Congress when I’ve called them out. You’re going to have arrows being shot at you every single day, whether you cause them or not. So, you better have thick skin.”

Tuesday at CBA LIVE also featured “Meet the Presidents,” a discussion with seven leading bank executives – each a current or former CBA Board member – on the opportunities and challenges they see in banking today, how they’re navigating an increasingly competitive landscape and their advice to future bank leaders on rising to the top of the industry.

On The Future Of Branches

On The Biggest Competitors They Face

“There are 5,000 banks in the country. I don’t worry about not having enough competitors.” – Chris McComish, S&T Bank

“We’re the largest community bank based in Boston. […] We’re big enough to have scale and matter. And the reality is our biggest competitors are still the largest banks in the marketplace.” – Quincy Miller, Eastern Bank

“We’re larger, but we look at the other banks as being bigger, so we still feel small relative to the big guys. But we also have the community banks, small banks, fintechs, so [competition is] coming from all angles.” – Tim Wennes, Santander Bank

On Responding To Evolving Consumer Demands

“The great thing about our business is that it’s a meritocracy and it starts with the customer. The customer is looking for us to perform for them every day and night. […] I think that now the scale is available through our technology partners [to deliver a top digital experience] while still providing that local flavor.” – David Bohne, Broadway Bank

On The Need For A Level Playing Field

“I agree with [the call for fintechs to assume federal oversight], and I welcome the challenge. I think there’s many benefits about being a bank. I think people should walk through the front door, become a national bank, and live on a level playing field.” – Chad Borton, SoFi Bank

On Advice For Future Bank Leaders

“Stay in banking. It’s going to be exciting. There’s lots of new changes. Take control of your careers. […] Find a culture that fits you and supports you and people that believe in you.” – Maria Tedesco, Atlantic Union Bank

“I just remind myself and my teams, banking is a noble business. We are in the business of fulfilling dreams and injecting capital into the communities. And when I get asked the question about what would you advise candidates […] I think the simplest way to say it is, keep learning, keep investing in yourselves and build relationships.” – Nitin Mhatre, Berkshire Bank

“Don't underestimate the impact that you have on others and the opportunity associated with that.” – Chris McComish, S&T Bank

After nearly three years, retail banking’s top annual event, CBA LIVE, has returned. Entering its 13th year, CBA LIVE attracts the top leaders and influencers from across the country who have gathered to discuss the most pressing issues facing the industry, from navigating the new CFPB to tackling the war for talent. With more than 70 hours of dynamic programming and 14 forum sessions tailored to different bank segments, CBA LIVE offers top-notch programming for professionals motivated to learn new trends and share ideas with the most influential decision makers in the business. For those unable to attend CBA LIVE this year, be sure to watch key moments via the CBA LIVE Stream by clicking HERE.