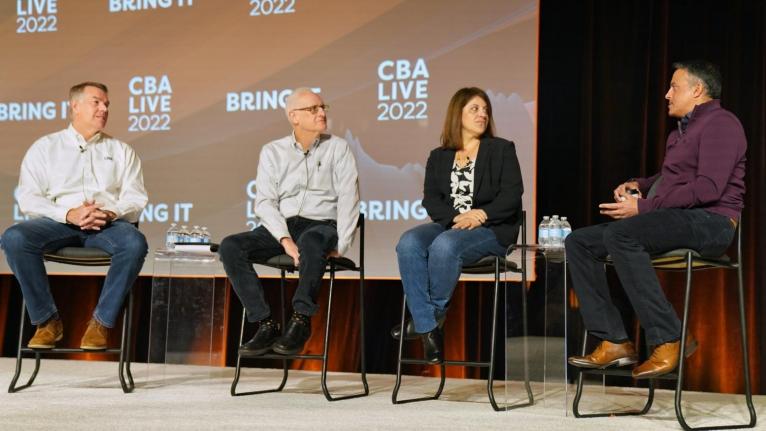 Retail banking’s top annual event – CBA LIVE – concluded this morning following discussions with the industry’s top leaders and influencers on some of the most pressing issues facing retail banks, including instituting a level regulatory playing field, DE&I, crypto and all things CFPB. CBA LIVE 2022 brought together more than 1,250 attendees for one of the first in-person banking conferences held in nearly three years.

During his opening address on Monday, CBA’s President & CEO, Richard Hunt issued a call to action for fintechs to voluntarily follow all consumer protection laws and assume the same federal oversight America’s leading banks have abided by for more than a decade. Over the last three days, key fintech leaders speaking at CBA LIVE 2022 expressed their agreement with Hunt’s sentiment:

“I agree with [the call for fintechs to assume federal oversight], and I welcome the challenge. I think there’s many benefits about being a bank. I think people should walk through the front door, become a national bank, and live on a level playing field.” – Chad Borton, SoFi Bank

“I’m all for a level playing field, which, in addition to supervision, would give [fintechs] access to federal payment systems.” – Meredith Fuchs, Plaid

“One of the best authorities [at the CFPB’s disposal] to level the playing field is a larger participant rulemaking. […] While policymakers at the Bureau have not used this tool in almost seven years, it is a needed vehicle by which a true [regulatory] parity in banking can be created.” – Gary Reeder, American Fintech Council

Cultivating The Next Generation Of Diverse Bankers

As the nation’s leading banks work to improve upon longstanding diversity, equity, and inclusion (DE&I) efforts, industry leaders shared their experiences and advice on how to successfully produce favorable DE&I outcomes for customers, employees, institutions, and communities:

“When you pull back the covers and you actually look at the data, you realize, while the numbers are moving in the right direction, we have so much to do.” – Samantha Melting, Synchrony, CBA Board Member

“I am proud to say we are moving in [the right] direction. We’re not at 50 percent gender executive. But we need to be. We need to be more race diverse as well [...] but we’re on that path. […] you’ve got to be very intentional and very purposeful.” – Pierre Habis, Santander Bank, CBA Board Member

While banks consider how and when to integrate cryptocurrencies and blockchain technology into their product suites, policymakers at the federal and state level are weighing in on the opportunities and risks these new technologies entail. Just this morning, President Biden signed an Executive Order on federal oversight of cryptocurrencies. At CBA LIVE, experts from across the industry weighed in on this rapidly evolving marketplace:

“The national adoption of cryptocurrency is led by Black and Latino communities—by double digits—which means that most of the people who are galvanizing a lot of cryptocurrencies are working class people, middle class people, who have been locked out or felt they were left out of the traditional financial system. So, the opportunity for payments is one of the reasons why we're excited about stablecoins.” – Cleve Mesidor, Blockchain Association

“There are three 'R's' to payments: relevancy, rails and rates. Relevancy is what's driving this conversation? Relevancy is why we've had three sessions in this one conference, because more than 12 percent of consumers have it, and over 80 percent of consumers who don't have it would love to get into it from a retail banking relationship.” – Desiree Wolfe, Webster Bank, CBA Deposits & Payments Committee Chair

Entering its 13th year, CBA LIVE 2022 attracted the top leaders and influencers from across the country who gathered in San Antonio, Texas to discuss the most pressing issues facing the industry, from navigating the new CFPB to tackling the war for talent. With more than 70 hours of dynamic programming and 14 forum sessions tailored to different bank segments, CBA LIVE offered top-notch programming for professionals motivated to learn new trends and share ideas with the most influential decision makers in the business.

For a recap of key moments from Day One of CBA LIVE 2022, click HERE.

For a recap of key moments from Day Two of CBA LIVE 2022, click HERE.