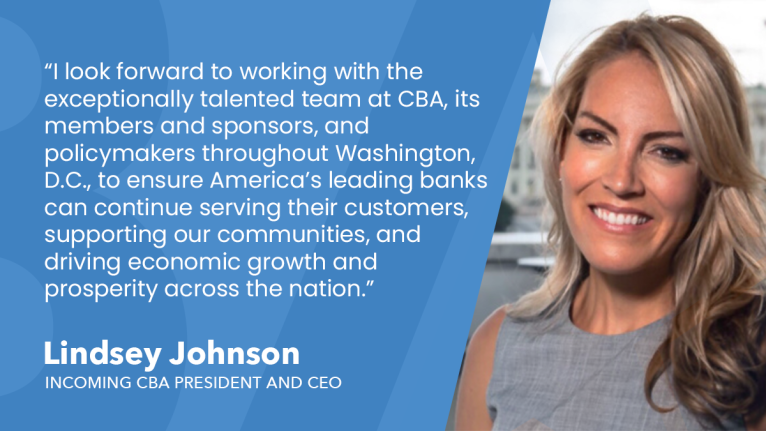 CBA General Programs
May 3, 2022
Succeeds Richard Hunt, who has served as CBA President and CEO since 2009

The Consumer Bankers Association (CBA) Board of Directors today announced Lindsey Johnson, President of U.S. Mortgage Insurers since 2015, will become CBA’s next President and CEO on July 5, 2022.

“We are thrilled to announce Lindsey Johnson as CBA’s next President and CEO. From leading an industry association that works to expand access to homeownership to serving in senior leadership roles on Capitol Hill and within the financial services industry, Lindsey brings to CBA nearly two decades of advocacy and strategic leadership experience. With a depth of financial services knowledge and a proven record of bipartisan advocacy, Lindsey is just the leader we were looking for to promote the work of our member banks, advance commonsense policy solutions and champion our industry and the customers we serve.”

“I am honored to be joining an organization that has been the leading voice of America’s retail banks for more than a century,” Johnson said. “The banking industry is undergoing an historic transformation – from the rise in new technologies that have changed how consumers bank to increased regulatory pressures – and, at every turn, CBA has helped its members successfully anticipate and navigate a new, 21st century terrain. I am grateful to the CBA Search Committee and Board of Directors for entrusting me with the responsibility of leading this organization.

Johnson added, “I look forward to working with the exceptionally talented team at CBA, its members and sponsors, and policymakers throughout Washington, D.C., to ensure America’s leading banks can continue serving their customers, supporting our communities, and driving economic growth and prosperity across the nation.”

Johnson succeeds Richard Hunt, who has led CBA since 2009 and announced late last year his plan to depart the organization in the summer of 2022. Richard will work closely with Lindsey to ensure a seamless transition.

“I have known Lindsey Johnson for many years,” Hunt said. “Throughout her career, Lindsey has demonstrated her ability to lead teams, work with a broad range of stakeholders, and deliver policy outcomes, and she will be a fierce advocate for our membership and the industry. After 13 wonderful years serving as CBA’s president and CEO, I am confident Lindsey is the right leader to take the reins of this truly incredible organization.”

“Over the last 13 years, Richard’s leadership has been felt throughout Washington and across every community our members serve,” Lee added. “As CBA begins an exciting new chapter, we thank Richard for his incredible service and unwavering devotion to the organization and to the industry.”

Currently serving as President of U.S. Mortgage Insurers, Johnson works with member companies to advance the value of private mortgage insurance to borrowers and taxpayers and to promote a sustainable housing finance system backed by private capital.

Johnson previously served as a Director at PwC. Prior to joining PwC, Johnson was a member of the Senate Banking Committee staff as the Republican Staff Director for the Senate Banking Committee’s National Security and International Trade and Finance (NSITF) Subcommittee, and as a Senior Policy Advisor to Senator Mark Kirk (R-Illinois), focusing on noteworthy banking, housing finance reform, and insurance legislation.

Johnson also served as Director for the Federal Home Loan Bank of Atlanta for seven years, representing the Bank in D.C. at the highest levels of government during several key legislative reforms that impacted the Bank including the Housing and Economic Recovery Act of 2008 and Dodd-Frank Act.