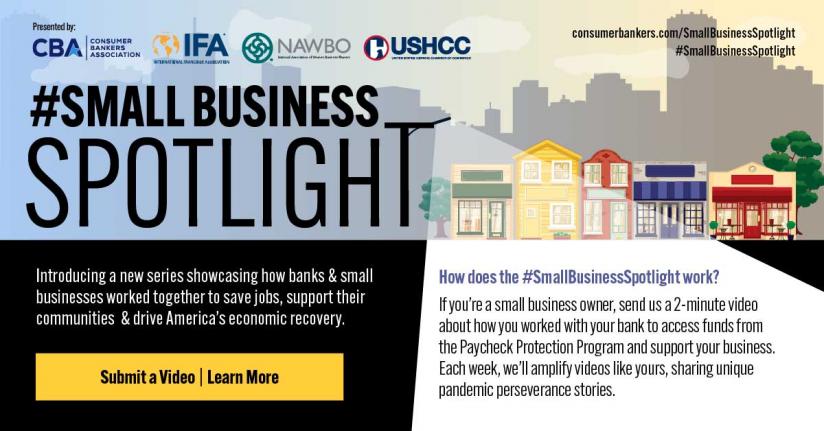 #SmallBusinessSpotlight will highlight how small and franchise businesses worked with banks to save jobs, support their employees, and serve their customers.

WASHINGTON – The Consumer Bankers Association (CBA), International Franchise Association (IFA), National Association of Women Business Owners (NAWBO), and U.S. Hispanic Chamber of Commerce (USHCC) today announced a new video series showcasing how small businesses and banks worked together to save jobs, support their communities and drive America’s economic recovery. The joint effort, called the #SmallBusinessSpotlight, will feature videos from small and franchise business owners across the country who were able to keep their doors open, their lights on and their employees on the payroll with the help of the Paycheck Protection Program and the support of the banking industry.

“When the pandemic first hit our communities, banks immediately mobilized to help ensure the backbone of our economy, our small and franchise businesses, got the support they needed to weather the storm. Within days of the first COVID-19 legislation being signed into law, the nation’s leading banks took on the herculean task of standing up the infrastructure for an entirely new government program, distributing hundreds of millions of dollars of relief and helping save millions of local businesses. The #SmallBusinessSpotlight is an opportunity to celebrate the resiliency of our small businesses and the critical role banks have played in sustaining our economy over the last 15 months during an unprecedented crisis.”

“To say the PPP provided a lifeline to franchise small businesses would be an understatement. All told, over $16 billion in emergency loans have been provided to locally-owned franchises across the country, saving over 20,000 franchise small businesses – from gyms and salons to day care centers and assisted living companies – impacting some 2.5 million jobs. And while Congress is responsible for casting that lifeline, our nation’s banks ferried small business owners to it. From bootstrapping the program’s infrastructure, to finding innovative and tailored solutions to help their franchise clients, this was truly a team effort. The #SmallBusinessSpotlight highlights that monumental effort.”

“We could never have anticipated the partnership that was so vitally necessary between our NAWBO Members and their banks throughout the pandemic. As we spread the word far and wide, our women business owners each chartered their path to keep their businesses alive. The #SmallBusinessSpotlight will help share how some of our women business owners found resiliency during times of such uncertainty.”

“The United States Hispanic Chamber of Commerce is proud to collaborate on this #SmallBusinessSpotlight initiative. The USHCC actively promotes the economic growth, development, and interests of more than 4.7 million Hispanic-owned businesses that, combined, contribute over $800 billion to the American economy every year. Programs like the Paycheck Protection Program saved many of our members during the pandemic and we will continue to advocate for access to capital programs like the PPP.”

CLICK HERE to learn more about the #SmallBusinessSpotlight and how to tell your PPP story.