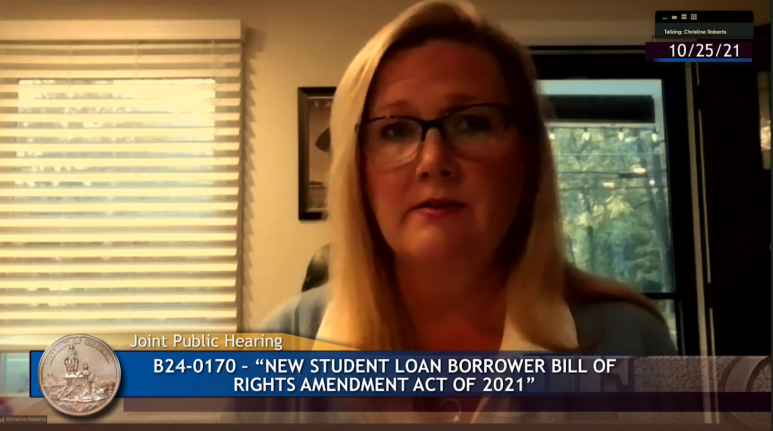 Consumer Bankers Association Education Funding Committee Chair and Head of Student Lending for Citizens Bank Christine Roberts earlier this week testified before the District of Columbia City Council Committee on Business and Economic Development in opposition to a proposal (B-170) that, in its current form, would reduce access to higher education options for students and families living in the nation’s capital.

As Roberts explained in her opening remarks:

“97 percent of private student loans made by Citizens and our competitors are being repaid on time with a default rate of 1.3 percent. This reflects the positive contribution the private sector is making to help DC students finance their education, while providing manageable repayment options.

“Unfortunately, our ability to continue to provide low-cost private education loan options to DC students attending colleges in your state and elsewhere will be jeopardized by B-170 as currently drafted. […] This legislation would create conflicting private education loan regulatory requirements among and between DC law and federal and other states’ laws. By taking away an important education financing option, this bill would put DC students at a disadvantage both at home and when enrolling out of state, and it will discourage out of state students from enrolling in DC colleges and universities that cannot offer the same quality funding options as other institutions.”

“The legislation would impose rigid and unworkable new rules on how and when any private education loan lenders releases cosigners from their loan obligations, despite the fact that there is no evidence of problems with these loans. Some 88 percent of private education loans made today, especially at the undergraduate level, involve cosigners.  Because the cosigners have better credit, lenders can offer lower interest rate loans to many more students. […]

Highlighting the difference between the private student loans and federal student loans, which account for more than 92 percent of the nation’s $1.7 trillion in outstanding student loan debt, Roberts made clear the rigidity of B-170 would not only limit banks’ ability to provide loans in DC, it could substantially increase young borrowers’ likelihood of default.

Pointing to other states, which have taken steps to protect private lending options for students and families to finance their education, Roberts concluded:

“At a minimum, banks should be exempted from this legislation to eliminate unworkable conflicts with federal regulations as has been done with private student loan legislation in states such as Virginia, Illinois and Massachusetts.”

CLICK HERE or the image above to watch Roberts’ full testimony before the District of Columbia City Council Committee on Business and Economic Development.

Of the more than $1.7 trillion in outstanding student loan debt, about eight percent of that amount, or $136 billion, is held by private lenders. The remaining $1.59 trillion accounting for more than 92 percent of the total is held by the federal government. Nearly all stories involving borrowers struggling with student loan debt involve federal loans. In contrast, borrowers of loans issued by private sector lenders are performing exceedingly well.

Over the past few years, CBA’s Education Funding Committee has been engaged and educating state legislators about the negative consequences of this language, which has been introduced in many states. In fact, over the past year, the Committee has been active in Nevada, California, New Jersey, Illinois, Colorado, and Connecticut. In many states, Committee members have been successful in helping policymakers understand the well-regulated private lending market and have negotiated exemption language to allow continued access to higher education choices for students through private lending options.

CBA’s Education Funding Committee seeks to serve as the primary industry voice for for‐profit student loan lenders by providing a productive forum for exchange of ideas among our members, by promoting sound regulation of the student loan marketplace through ongoing dialogue with state and federal policymakers and regulators, and by being strong advocates for the highest possible level of ethics in that marketplace.

The Committee’s priorities are to: