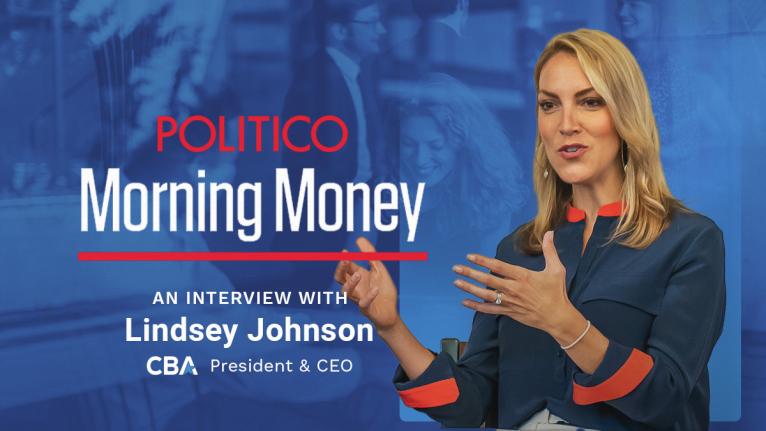 In a wide-ranging conversation featured yesterday in POLITICO’s Morning Money, CBA President & CEO Lindsey Johnson discussed some of the key policy issues facing retail banks and how the industry is responding to a new regulatory regime in Washington, D.C. The exclusive, on-the-record interview was Johnson’s first since assuming the role of President & CEO and comes just two weeks before seven CBA members will testify on Capitol Hill.

Commenting on the need for policymakers to recognize just how much the banking industry has changed over the last decade as they consider future action, Johnson said:

“Some of the things that policymakers are pressing the banks on — whether it is bank fees, whether it is overdraft — a lot of the commentary […] and discussion points are just very dated. […] [CBA has worked to ensure] policymakers are speaking from a point of reality, […] not just using political or ideological talking points.”

Ahead of the upcoming CEO hearings in Congress, Johnson added that banks have a great story to tell and are well-positioned to support hardworking Americans through economic uncertainty:

“The biggest message is going to be that this industry is prepared, and they are coming from a position of strength to lead the economy through this next phase.”

Johnson also conveyed concern over how the policymaking process has shifted in recent years, including an increasing lack of engagement from regulators with the very institutions they’re tasked with overseeing:

“The way that we work together with these regulatory bodies has shifted. I would love to see it grow in a more constructive way. It’s very counterproductive to not work with the industry, to not work with the entities that you regulate, to not try and address these issues in a transparent way.”