ICYMI: CBA Board Leadership Focused On Building Next Generation Of Diverse Banking Executives 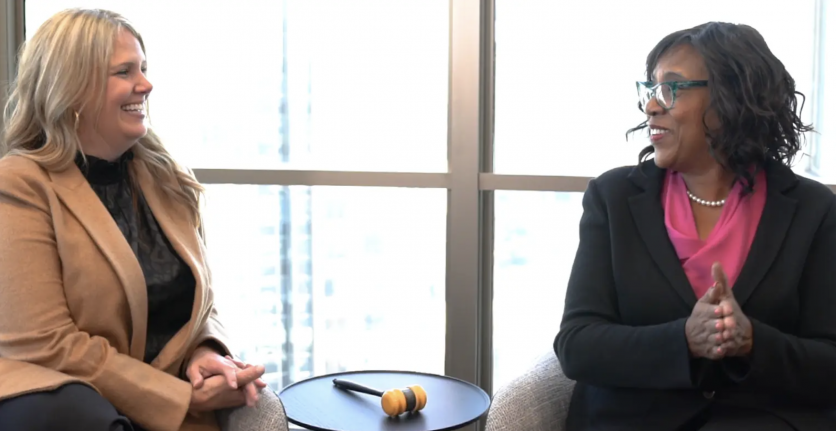 WASHINGTON – In a new profile story appearing in yesterday’s Charlotte Business Journal, Consumer Bankers Association Board Chair, Michelle Lee, Regional Banking Executive, Branch Banking at Wells Fargo and Immediate Past Chair, Christine Channels, Head of Community Banking and Client Protection at Bank of America discuss how – as Charlotte-based female executives at two of the nation’s largest banks – they are using their leadership positions to drive progress in the industry.

From her first job in banking as a teller 37 years ago, Wells Fargo’s Michelle Lee now oversees nearly 5,000 branches and more than 41,000 employees across the bank’s national footprint. Commenting on the importance of representation in the industry, Lee recognized the impact of working underneath an African-American female branch manager early in her career:

"I saw her role as something I could accomplish, something I could achieve. But above her, there weren't people who looked like me. For a good portion of the early part of my career, I strove to be a branch manager because I thought that was it for me."

Now, as CBA’s new Board Chair, Lee is focused on ensuring the organization builds on its commitment to promote diverse leaders on its numerous membership subcommittees and councils:

“Being named Chair was a proud and humbling experience. CBA is embracing its role in driving diversity in the industry. I think it's a space, frankly, where CBA could be silent but chooses not to.”

More than 20 years ago, Bank of America’s Christine Channels started her career in banking as a coder – a role uncommon for women at the time. Tasked today with leading roughly 700 branches, Channels has broken barriers as one of the most influential female executives at the Charlotte-based bank. While serving as Chair of CBA’s Board for the past year, she focused on increasing diversity in CBA’s Executive Banking School and looks forward to applying her past experiences as a female banking leader to assist Lee in driving diversity across the industry:

“(My career has) showed me the importance of building a diverse team, being very intentional about that. But not just doing it because it's the right thing to do, but because of the success it brings as well. I saw teams that had diversity and a focus there really outperforming teams that weren't.”

Yesterday, the Consumer Bankers Association announced the election of Well’s Fargo’s Michelle Lee as its new Board Chair following the successful tenure of Bank of America’s Christine Channels, who will remain on CBA’s Executive Committee as Immediate Past Chair. John Durrant, EVP, Retail and Small Business Banking at Capital One was also named as Chair-Elect for the upcoming year. To view CBA’s full list of Board Members, please click HERE.

To watch “Passing the Gavel,” a conversation about leadership with Michelle and Christine, click HERE or the image below.

To read the full story in yesterday’s Charlotte Business Journal, click HERE or read below:

How these Charlotte banking execs are bringing diversity to the industry

The past year-and-a-half has been a challenging period for banks, once at the forefront of a thriving bull market with record profits.

Covid-19 brought that to a halt. Banks implemented safety protocols and moved much of their workforce to a remote setting. They focused on assisting customers who were struggling, protecting their own balance sheets from credit defaults and implementing the federal Paycheck Protection Program at an unprecedented speed.

Charlotte-based bank executive Christine Channels, as board chair, was charged with leading the Consumer Bankers Association, a Washington, D.C.-based organization that represents the largest retail banks, through these challenges. She reflected on that experience in a recent interview.

"The pandemic was unlike anything I've experienced in my career," Channels said. "It really emphasized to us how important banking is. It is an essential service. ... We were open. We were able to be there for clients because they still had those moments that matter."

Besides Covid-19, bank leaders are still faced with the industry's ongoing issues, including the historical lack of female and minority representation. That problem is improving but still needs work. These groups are lagging in executive-level positions — 19% of executive or senior-level positions at 44 of the nation’s largest banks are held by minority employees, with less than 30% held by women, according to a 2020 study from the U.S. House of Representatives Committee on Financial Services, which drew on pre-pandemic data.

That was another focus area for Channels. She plans to continue that work as she passes the board chair role to Michelle Lee, another Charlotte-based executive. It's a cause that holds personal meaning for Lee. She is now the first Black female executive to hold CBA's chair position.

These three local executives are changing the face of the industry, using their leadership positions and insight to drive more progress. Here's how they are promoting diversity in banking and why they see it as a priority.

Michelle Lee is the regional executive of branch banking at Wells Fargo & Co.

'Something I could accomplish'

Michelle Lee has worked at Wells Fargo and its predecessors for 37 years, focusing on the East Coast. She started as a teller in 1984 and stayed through multiple company name changes before landing her current role as regional executive of branch banking at Wells Fargo. Lee manages about 4,900 branches and more than 41,000 employees across 36 states and the District of Columbia.

Lee recalled one Black female branch manager from early in her career. At the time, she thought that position was her career goal.

"I saw her role as something I could accomplish, something I could achieve. But above her, there weren't people who looked like me. For a good portion of the early part of my career, I strove to be a branch manager because I thought that was it for me," Lee said.

Lee said CBA is embracing its role in driving diversity in the industry. Being named chair was a proud and humbling experience. Several years ago, Lee was the only African American on CBA's board. Her goal is for CBA to continue to be intentional: What does representation on its board look like? What about the subcommittees and councils?

In her career, Lee has learned the importance of having diverse leaders in the room. She said it brings different perspectives and also impacts future leaders, just as seeing that branch manager early on encouraged her own leadership aspirations.

"I think it's a space, frankly, where CBA could be silent but chooses not to," Lee said.

Christine Channels is the head of community banking and client protection at Bank of America.

An investment in success

Christine Channels started her banking career more than 20 years ago as a coder — a role uncommon for women. She knows what it's like to be the only woman in the room. Channels now leads community banking and client protection at Bank of America Corp. (NYSE: BAC). She oversees about 700 branches and focuses on investments in technology, the Community Reinvestment Act and the Hispanic-Latino population.

For context, there are about 70,000 employees in BofA's consumer and small business division.

As CBA chair, Channels focused on increasing diversity in the organization's Executive Banking School, which recently graduated 55 bankers from its virtual 2021 session. The program provides learning in finance, risk and leadership. This year, nearly 300 bankers from more than 30 banks participated, she said.

Channels said she is looking forward to working with Lee on continuing diversity efforts. Her past experiences in banking are now informing the decisions she makes as a leader.

"It showed me the importance of building a diverse team, being very intentional about that. But not just doing it because it's the right thing to do, but because of the success it brings as well. I saw teams that had diversity and a focus there really outperforming teams that weren't," Channels said.

Kristy Fercho is the head of home lending at Wells Fargo & Co.

Kristy Fercho likes to joke that all she knew about mortgages upon joining Fannie Mae in 2002 was that she had one. She has had a non-traditional career journey, working in the health care and consumer products industries prior to mortgage. Now, she heads up Wells Fargo Home Lending and is taking over this month as the first Black female chair of the Mortgage Bankers Association, a D.C.-based organization focused on real estate finance.

"I challenge the status quo. I've built my career on pushing the organizations that I've been a part of and that I've led to be better, to rise to another level, to not accept good as good enough," Fercho said.

She wants to tackle industry diversity from two angles — developing more diverse job candidates through college outreach, internships and mentorships, plus eliminating barriers to homeownership through revamped policies and credit standards. The mortgage industry has evolved over her career, Fercho said, but it takes decades to correct deep-seated issues.

Black mortgage applicants, for example, are often denied conventional loans at higher rates than white applicants, according to studies from the Consumer Financial Protection Bureau.

Moving ahead, Fercho plans to watch housing inventory and prices, especially in minority communities. She said she wants to ensure Wells Fargo reaches underserved areas with programs to bolster minority homeownership, such as mortgage assistance, and make the process more personalized for customers.

"If you're going to make an impact, why not do it at the largest platform in the country?" Fercho said.