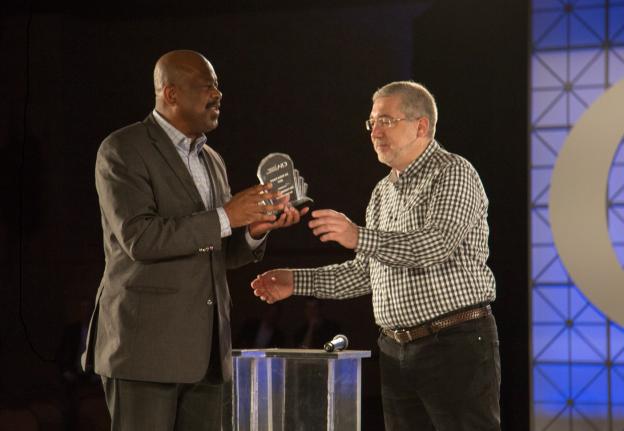 Dallas, Texas (April 5, 2017) – Yesterday, the Consumer Bankers Association (CBA) presented PNC Financial Services Group, Inc. with the seventh annual Joe Belew Award. This year, CBA honored its member bank with the most innovative and impactful program supporting digital access to financial services. PNC was selected by CBA’s Community Reinvestment Committee based upon the achievements of the PNC Fairfax Connection, marking the second year in a row PNC has received the Joe Belew Award.

“CBA’s member banks are committed to supporting consumers’ digital banking needs. Not only do these innovations allow consumers to bank whenever, wherever, and however they choose, they also expand access to necessary financial products and services to low-and-moderate-income communities. This year, we are pleased to honor PNC with the Joe Belew Award and thank them for their commitment to expanding digital banking access.” said Jim Matthews, Senior Vice President, CRA Compliance at Capital One, who also serves as CBA’s Community Reinvestment Committee Chair.

“It is an honor to have won the prestigious Joe Belew Award for the second straight year,” said Todd Barnhart, Executive Vice President and Head of Retail Distribution at PNC, who also serves on CBA’s Board of Directors. “Every consumer should have the opportunity to benefit from the banking system, and we at PNC are committed to making this a reality for the low-and moderate-income families in our communities. The PNC Fairfax Connection offers local citizens a robust network of community resources and tools to meet their digital banking needs through education and training.”

“Receiving CBA's Joe Belew Award is quite an honor, and it speaks directly to the hard work and dedication of our team members and partners,” said Michael J. Taylor, Senior Vice President of West Territory at PNC, who oversees the PNC Fairfax Connection. “We are committed to continuing our relationship with the Fairfax and greater Cleveland community to provide meaningful services to help benefit the financial well-being of local citizens. I am proud to accept this award on behalf of PNC, and I look forward to continuing to help our customers and deepen our community relationships.”

PNC Financial Services received $10,000 from CBA, of which $5,000 was made in the name of former Chair of CBA’s Board of Directors and U.S. Bank President and CEO Richard Davis, to donate to the non-profit program partner of their choice.

BBVA Compass: Launched a financial literacy pilot program, in coordination with select nonprofit community organizations, to provide customers with digital banking access, and an opportunity to receive a free prepaid smartphone with one-month of free service.

Capital One Financial Corporation: Created Ready, Set, Bank, in partnership with micro-learning company Grovo, to help older adults leverage online banking to enhance their financial well-being. Ready, Set, Bank is a web-based program of 44 micro-learning videos which teaches viewers how to use various digital banking features, and stay safe while banking online. The program is available in all of Capital One’s branches and is being used by 22 of Capital One’s non-profit partners to provide hands on learning to senior citizens.

KeyBank: Created a product innovation fund, with an initial investment of $3 million, to seek new and alternative solutions to meet the needs of low-and moderate-income communities. To help bridge the digital divide, KeyBank created an initiative to provide youth and seniors in urban and rural low- and moderate-income communities with access to computers and digital banking training.

USAA Federal Savings Bank: Introduced biometric technology, such as fingerprint and facial recognition, to its mobile app to better assist visually impaired customers. This technology allows visually impaired users to quickly access their banking information without having to type a username and password.

Wells Fargo & Co: Launched Go College! Now, a national education initiative, which features free online streaming of the First Generation film, and classroom resources to help educators, parents, and students navigate the path to preparing and paying for college. Since Wells Fargo began sponsoring the film screenings, over 4 million students, families, and educators have been touched.

The Joe Belew Award was established in 2011 in memory of Joe Belew, former CBA president, to honor his commitment to community development.  The annual award recognizes a CBA member bank which continues that legacy. Citizens Bank, Discover Bank, First Niagara Financial Group, PNC Financial Services, and Wells Fargo are past winners of the award and recipients are selected by a volunteer subgroup of the CBA Community Reinvestment Committee. The focus of the Joe Belew Award changes annually. Past award winners were recognized for job creation, low-and moderate-income housing programs, financial education, financial inclusion, and support programs to serve service members, veterans and their families.