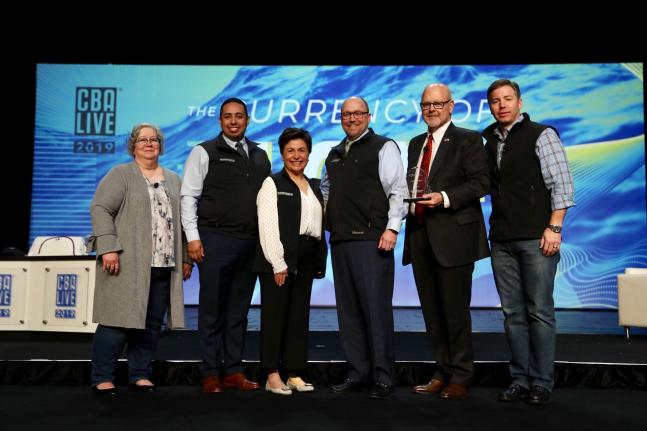 WASHINGTON, D.C. – The Consumer Bankers Association (CBA) today presented the ninth annual Joe Belew Award to Woodforest National Bank for its Woodforest Foundry program. The 2019 Joe Belew Award was presented to the CBA member-bank applicant with the most innovative and impactful small business initiatives, highlighting its “Currency of NOW” efforts in the community. The winner was selected by CBA’s Community Reinvestment Committee from a record 12 entries from ten banks.

“Small businesses are vital to the development of communities all across the nation. The work Woodforest is doing with their Foundry program proves the entrepreneurial spirit is strong in this country and banks are stepping up to fill the need by providing mentorship and resources,” said CBA President & CEO Richard Hunt. “We are proud of the great work Woodforest is doing in their communities as they deliver critical education and opportunity to those wishing to play a part in their communities by opening a small business.“

“Woodforest will continue to support small businesses and entrepreneurs across the country, and the Woodforest Foundry is one way we are delivering on that commitment. However, Woodforest cannot tackle this need alone, and we encourage other banks to join us in providing trusted guidance and putting the right local resources together in each of our communities to help activate, grow and sustain local entrepreneurial ecosystems,” said Jay Dreibelbis, President and CEO, Woodforest National Bank.

Woodforest’s Foundry program intends to help entrepreneurs turn passion into action, test ideas and ability to run a business while also minimizing capital loss. The tool is facilitated by entrepreneurs for entrepreneurs to enhance local entrepreneurial ecosystems which revitalizes underserved communities and helps grow businesses. With the Foundry, entrepreneurs find a community of mentors and trusted guidance from peers, Woodforest bankers and community partners.

The Joe Belew Award was established in 2011 in memory of Joe Belew, former CBA president, to honor his commitment to community development.  The annual award recognizes a CBA member bank which continues that legacy. Citizens Bank, Discover Bank, First Niagara Financial Group, PNC Financial Services and Wells Fargo are past winners of the award and recipients are selected by a volunteer subgroup of the CBA Community Reinvestment Committee.