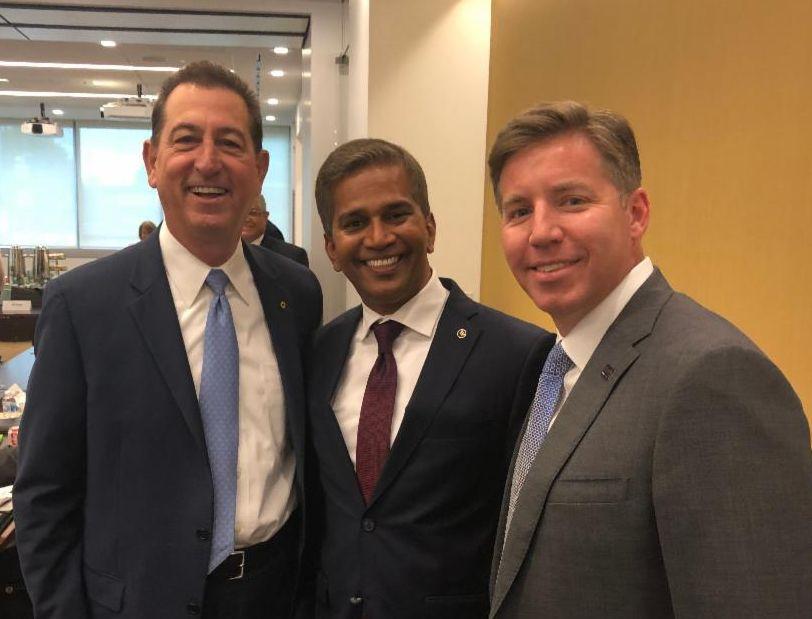 Cajun Thoughts: CBA MEETS WITH OCC COMPTROLLER OTTING CBA’s leadership team thoroughly enjoyed meeting with OCC Comptroller Joseph Otting to discuss CRA reform. More details from our meeting are below. A reminder – nobody in this town had the courage or desire to revamp CRA until Comptroller Otting came to town, and keep in mind banks contribute $480 billion ANNUALLY in CRA investments … MISSISSIPPI RIVER IS NOT MIGHTY IN MINNEAPOLIS I traveled to Minneapolis this week to visit with very active CBA members U.S. Bank and TCF Bank, where we discussed M&A, BSA/AML, small dollar lending, POTUS 2020, CFPB restructuring and examinations, Interchange, the California Privacy Law, regulatory action and other hot button retail banking issues. I explored a view of the Mississippi River – some 120 miles south of the source. It was very calm and looked swimmable, unlike back in my home state of Louisiana. There was also keyless entry at the Minneapolis Marriott allowing guests to skip check in, registration line and discussion (this I missed!) … CONGRATULATIONS TO MIKE ALLEN Many thanks to Mike Allen for dedicating 23 years of his life to developing banking “students” at CBA Executive Banking School. A former internal CBA Team member, now retired EBS faculty member, we wish him all the best as he continues in his role as Digital Director at First Financial. We will miss you! … STUDENT DEBT DELAYS MILLENNIAL HOME OWNERSHIP A recent survey by Clever , an online real estate marketplace, indicates about 48% of the 1,000 undergraduate student participants plan to delay home ownership by an average of seven years due to student loan debt burden. At the same time, 84% of participants believe homeownership is part of the “American Dream.” It’s time to right-size federal student lending and modernize plain language disclosures so more young adults can live the Dream! Learn about CBA’s recommendations for modernization here.

CBA Meets with OCC to Discuss CRA: Yesterday, CBA Board Chairman Todd Barnhart of PNC, Incoming CBA Board Chairman Nitin Mhatre of Webster Bank, CBA's Community Reinvestment Committee Chair Sue Whitson of BMO Harris and members of the Community Reinvestment Committee met with OCC Comptroller Joseph Otting to discuss the OCC’s upcoming Community Reinvestment Act rulemaking.
In the meeting, CBA members and Comptroller Otting discussed the responses received as part of their Advanced Notice of Proposed Rulemaking (ANPR), noting 93% of respondents stated CRA needs to be modernized. The Comptroller hopes to have the Notice of Proposed Rulemaking (NPRM) finalized in the next 30 days, with an anticipated release of the end of September/early October.
The NPRM will be prescriptive in what the OCC plans to establish but will also include roughly 50 clarifying questions aimed at refining the specifics of the rule. While the Comptroller mentioned the OCC was possibly about 30 days off of their initial timeline, they still anticipate a final rule late this year or first quarter of 2020. The OCC focused their comments on what will count, where will it count, how will it count, and how to aggregate and report CRA activity.
What Will Count:
The OCC will establish a list of CRA approved activities, which will not be embedded in the rule, to allow for flexibility and transparency as banks engage in CRA activity. The OCC plans to allow institutions to weigh their activities against a set of criteria the OCC will establish and allow institutions to check with their examiner prior to engaging in the activity to ensure it will count for CRA credit.
Where it Will Count:
Assessment areas have narrowed continually throughout the years. While the OCC plans to maintain a primary assessment area based on a bank’s headquarters, branches and deposit-taking ATMs, they also plan to establish a way to allow for banks to move beyond that area based on their business model.
The OCC plans to propose that where banks have 5% or more of their deposit activity, their CRA activity will be measured in those areas. The OCC plans to allow for flexibility with these new assessment areas to ensure multiple assessment areas don’t overlap and may open the assessment area up to the metropolitan statistical area surrounding the assessment area. The OCC also noted 1 transaction cannot account for more than 1% of a bank’s community development activity. If 2% of a bank’s community development activity in an area is of a certain type, half of that cannot be established by one transaction.
How it Will Count:
A methodology will be established to count CRA activity which uses a bank’s domestic deposits as the denominator and their CRA activity as the numerator to establish a ratio for performance. While this signals a more objective approach to CRA, there will still be room for examiner judgment in the analysis. This metric will still include a bit of subjectivity and multiple measures to allow for flexibility in activity in different areas.
The Fed has reportedly developed their own metric which they will discuss with the OCC on Friday.
How to Aggregate CRA Activity:
In 2017, there was $480 billion in CRA activity, but the OCC was only able to ascertain this by going through every individual performance evaluation filed. By establishing methods for banks to report their CRA activity, banks will have better means to evaluate their performance. The OCC also plans to require banks to keep loans reported for the entire life of the loan, to encourage them not to sell off their loans after the exam cycle ends so the performance of the activity can count more thoroughly.
CBA Statement:
CBA members thanked the OCC for stepping up and taking this issue on, while raising concerns surrounding the digitization of banking’s effect on CRA. Comptroller Otting responded that the OCC regulates the majority of deposits in the nation and can move forward on their own if need be.
After the meeting, CBA President & CEO Richard Hunt issued the following statement:
“Modernizing CRA rules written during the age of rotary phones is a way for banks to invest even more in communities. Comptroller Otting, along with the entire OCC team, should be commended for their extensive work with all stakeholders during this process.
“Details still need to be ironed out, but clear standards for which investments are eligible for CRA credit will increase transparency and could lead to more investments. Further, measurable metrics will reduce subjectivity throughout the exam process and provide flexibility for bank business models and strategies.
“While it would be ideal and preferable to have all three federal agencies in agreement to increase clarity, transparency and ultimately the effectiveness of investments, OCC chartered financial institutions account for the vast majority of CRA investments. This is a generational opportunity that should not be wasted and needs to move forward.”
The full release is available here.

Left to Right: Jim Matthews of Capital One , Incoming CBA Board Chairman Nitin Mhatre of Webster Bank , CBA Board Chairman Todd Barnhart of PNC , CBA President & CEO Richard Hunt , CBA Community Reinvestment Committee Chair Sue Whitson of BMO Harris , Reza Aghamirzadeh of Citizens , Staci Glenn Short of Huntington Bank , Lloyd Brown of Citibank , and Doug Schaeffer of Woodforest.
D.C. DOWNLOAD
Volcker Rule Changes on the Rise: According to sources, the Federal Reserve and other regulators could finish their work on changes to the Volcker Rule as soon as next week, with one potential revision being the elimination of an "accounting prong" concept from the definition of proprietary trading. The regulators are reportedly set to put the changes in effect without a re-proposal of the rule or a comment period.
Regulatory Agencies Push SOFR Adoption : The U.S. Treasury Department , the Federal Reserve Bank of New York , the Securities and Exchange Commission are pushing the financial services industry to move away from LIBOR to a new rate created by the Fed called Secured Overnight Financing Rate (SOFR). The transition is pivotal to a more sound and resilient system of best practices; however, institutions have been hesitant to make the switch because of key differences between the two rates.
LIBOR rates are based on cost estimates for banks to borrow over short-term periods while SOFR sets interest costs into the future, making payment streams predictable by using U.S. government debt as collateral. Predictable rates could be groundbreaking for reducing surprises that could ultimately cause investors or lenders to lose money or for borrowers’ payments to unexpectedly rise.
INDUSTRY NEWS
PNC Names Gavin Geraci COO, Retail National Expansion: As the bank continues to expand nationwide, PNC appointed former COO of Business Banking Gavin Geraci to be COO of Retail National Expansion . Gavin is also a member of CBA’s Small Business Committee , which is focused on education, legislation and benchmarking for small business banking. Congratulations!
CIT to Purchase Mutual of Omaha: In a $1 billion cash and stock deal, CBA member bank CIT Group will purchase Mutual of Omaha Bank . The deal, expected to close in the first quarter, will expand CIT ’s presence and provide them with more products to offer consumers. We appreciate CIT following the CBA golden rule - acquiring a non-member bank!
HSBC Launches Digital Lending Platform: In partnership with fintech Amount , HSBC USA is offering up to $30,000 in personal digital loans, inserting the bank into the competitive digital loan market that includes other banks and fintechs. The service streamlines online personal loan applications, allowing consumers to evaluate options, submit applications online and receive a credit decision within minutes.
Financial Fraud Targeting College Students: A growing issue in financial services is financial fraud affecting college students. This week, Regions Bank published a new article highlighting the industry-wide trend whenever a fraudster gets a college student to cash what turns out to be a fraudulent check – or even hand over banking credentials as part of some scheme. The full article, which includes how to prepare for and stop the scam, is available here .

CBA’s State of the Week is NEW JERSEY, home to TD Bank , where more than a quarter of Garden State residents bank with a CBA member. CBA members in New Jersey hold $363 Billion in total assets, employ 46,000 people, provide $7.8 Billion in small business loans and serve 4.1 Million customers. Check out our state by state numbers here.