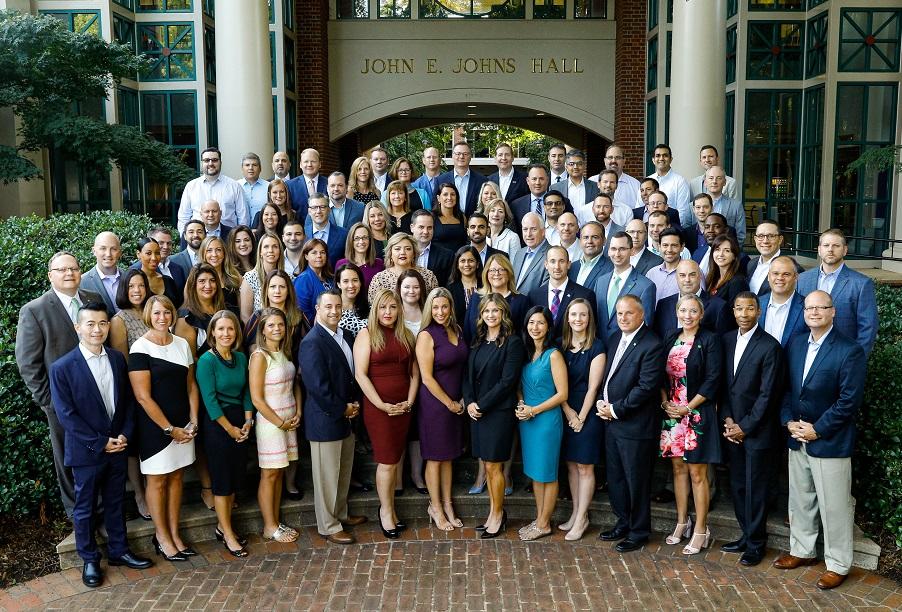 Cajun Thoughts: BANKING SCHOOL FOR THE BOOKS CBA Executive Banking School is one of my favorite times of the year and this session – the 68th – delivered once again with 82+ total graduates and seven honors graduates. Over nearly seven decades, 5,600 bankers have been through EBS. The dedication of the graduating class is a true testament to their work ethic and how much their banks prioritize the importance of leadership and continued education. Congratulations to an excellent group of top-notch bankers, and especially to Angela Conti of TD Bank for being named the 2019 Tem Wooldridge Award recipient for outstanding academic performance, integrity and leadership. Retail banking is in great hands! Special thanks to the entire EBS Faculty, including Year 1 Lead Mike Allen, Year 2 Lead Tom Dent and Year 3 Lead Ted Brauch as well as the CBA Education Team for making this year’s session a huge success … CRIMINAL HACK AT CAPITAL ONE Yes, banks have a responsibility to protect our consumers, but we also must remember these professional hackers are criminals and they should be punished. Software engineer Paige Thompson, who has since been charged and arrested, allegedly accessed more than 100 million accounts and credit card applications. It is pretty unusual to apprehend a suspect so quickly, however, Thompson had engaged in online conversation which revealed ownership of the bank’s information. Importantly, Capital One emphasized NO credit card numbers or login credentials were compromised, nor the vast majority of SSN on affected applications. Senate Banking Committee Chairman Mike Crapo said Tuesday he is beginning to investigate the breach – Stay tuned … TO BRANCH OR NOT TO BRANCH I read an article this week featured in the Financial Brand that explored survey results of relationships between branch longevity and digital banking. One point by the report's lead author David Horton that really stuck out to me was, “The future belongs neither to old-school banks nor challengers/fintech startups, but to those who deliver an experience that is unique and valued.” Striking the perfect balance is key! … MEMBERSHIP CALL It was great to have many of you on Wednesday’s annual mid-year members-only call featuring legislative and regulatory updates. The House recessed last week, the Senate left town this week, and CBA’s Sam Whitfield predicts there will be no government shutdowns this coming year – Let’s see what happens! 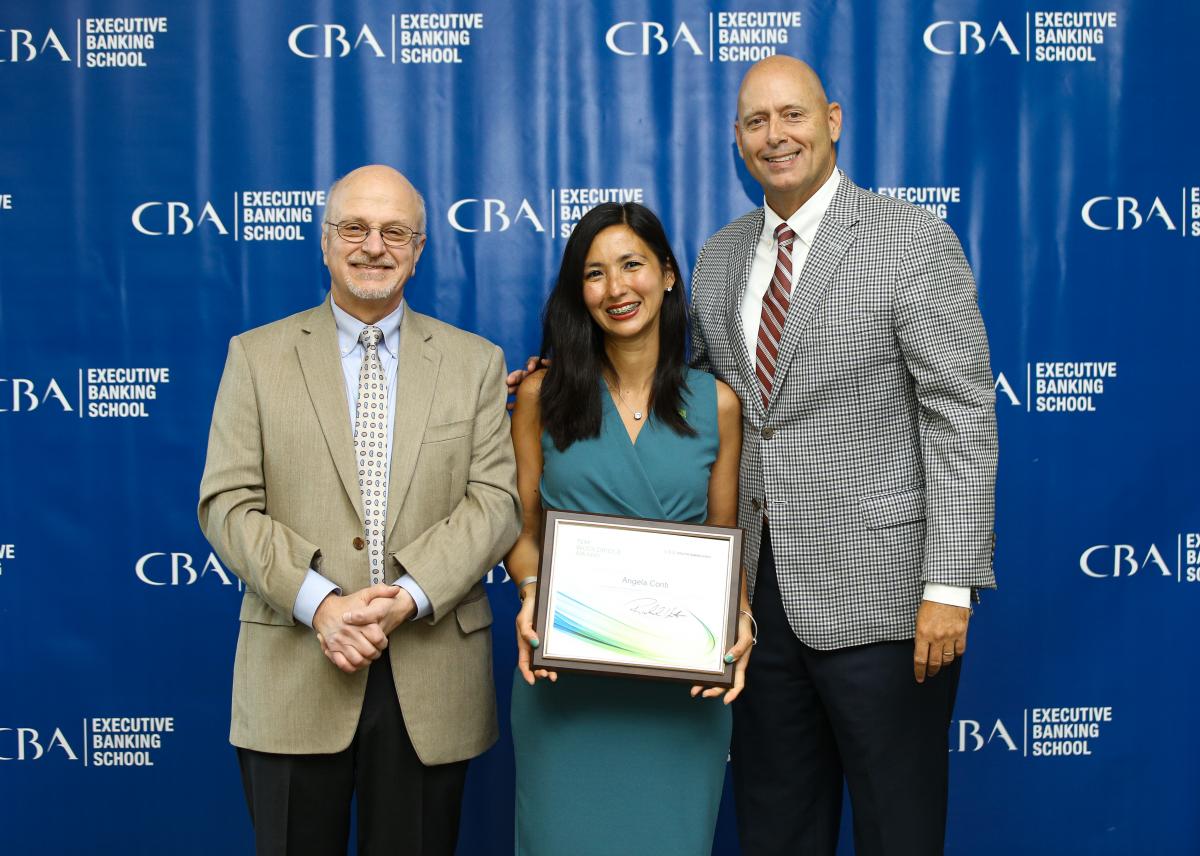 Conti was selected by the CBA Executive Banking School faculty, with input from senior class peers, to receive the Tem Wooldridge Award. This prestigious honor recognizes the top student who demonstrates outstanding academic performance, high integrity and a strong work ethic. In addition to academic merit, Tem Wooldridge Award winners possess the necessary character and leadership skills to bring out the best in their teammates. Presented annually, the award was established to honor a now-retired faculty member.
Now marking its 68th session, CBA Executive Banking School offers the banking industry's top talent the knowledge and skills they need to develop into the leaders of tomorrow. Designed and delivered by leading industry practitioners, the program immerses students in real world scenarios experienced daily at banks.
The following students graduated from CBA Executive Banking School with honors:
D.C. DOWNLOAD
FDIC Publishes 2019 Risk Review: The FDIC published its 2019 Risk Review, an annual publication that summarizes conditions in the U.S. economy, financial markets and banking industry, and presents key risks to banks in two broad categories: credit risk and market risk.
Overall, FDIC-insured institutions performed well in 2018 – the strong financial condition of banks contributed to a declining number of institutions on the Problem Bank List and there were no failures during the year. However, the FDIC cautioned economic growth will slow in 2019 from recent highs, and that the pace of net consolidation rose in 2018 for the first time since 2015 and remains relatively high by historical standards.
Key takeaways from the report:

The two new units include:

The OCC noted the realignment, which will be effect Oct. 1, 2019, will consolidate certain supervision and supervision-support functions. The Midsize and Community Bank Supervision and Large Bank Supervision units will retain primary responsibility for overseeing the banks, savings associations, and federal branches and agencies of foreign banks that compose the federal banking system.

The vast majority of employees who will make up the new units will be reassigned from other OCC divisions. A limited number of new positions will be advertised later this year.

A copy of the OCC announcement is available here.

CBA Debt-Collection Working Group Meets with CFPB: Members of CBA’s debt-collection working group came to town this week to meet with the CFPB, discuss their rulemaking agenda and what CBA plans to propose in our comments.

The main points we advocated for:

It was a productive meeting allowing us to better respond and inform them on many of these issues than CBA will be filing an ex-parte letter summarizing our comments that will go on the record as well for the CFPB to consider throughout the rulemaking process.

KeyBank to Offer Financial Wellness Checkups at Branches: KeyBank is now offering customers an opportunity to sit down with bankers at its branches to assess their financial wellness. According to bank officials, Key’s goal here is to offer customers more personalized service, not to attract new customers.

JPMorgan Chase Taps Persado, AI-Written Ad Copy: JPMorgan Chase has partnered with artificial intelligence firm Persado on a five-year deal that will see more of the bank's creative copy in ads being written by AI.

The companies teamed up in 2016 on a pilot, which resulted in click-thru-rates increasing by up to 450% after human-created copy was rewritten by AI, and JPMorgan marketing chief Kristin Lemkau says that the technology "rewrote copy and headlines that a marketer, using subjective judgment and their experience, likely wouldn't have." Learn more here.

Tune In to CBA's Suite 550 Podcast: On the latest episode of CBA's Suite 550 Podcast, Bank of America’s Managing Director and Head of The Academy John Jordan and PNC’s SVP of Human Resources-Retail Distribution Jenny Rhodes sit down with Brenda Mechling, CBA’s SVP of Education Relations, to discuss what the banking industry is doing to recruit, retain and prepare the best and the brightest retail bankers.

John and Jenny lead CBA’s Talent Management Committee and both of their banks have a focus on ongoing education for their team members.

The podcast is available here.

These reforms, championed by CBA, would help constrain skyrocketing college tuition and help students better understand the amount of federal debt they are responsible for repaying. 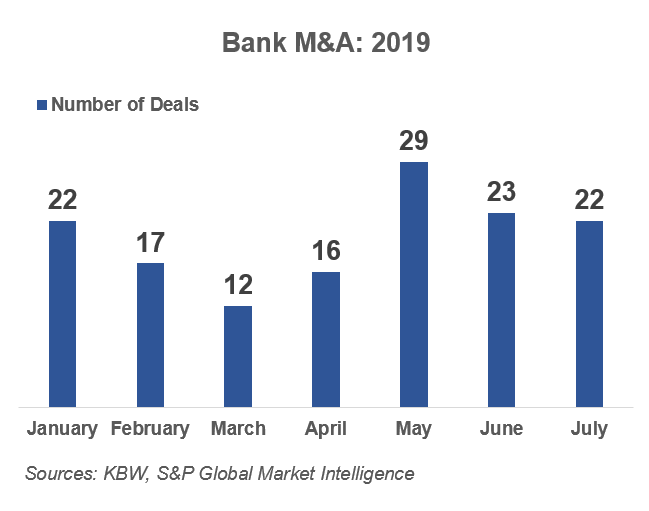 Investar Bank Expands its Footprint into Alabama by Announcing Agreement to Acquire Bank of York with Locations in York, Livingston and Tuscaloosa

CBA’s State of the Week is MAINE, where more than 1 out of every 5 residents bank with a CBA member! CBA members in the Pine Tree State hold $13 Billion in total assets, employ 4,000 people, provide $300 Million in small business loans and serve 300,000 customers. Check out our state by state numbers here