CFPB, Digital Innovation & Mobile Banking
August 24, 2018
D.C. DOWNLOAD
Kraninger Committee Vote: The Senate Banking Committee yesterday morning advanced Kathleen Kraninger’s nomination to run the Bureau of Consumer Financial Protection by a party line vote. The full Senate consideration of President Trump’s pick is expected sometime this fall, and will also likely break down along party lines.
Following the vote, CBA released a statement encouraging “the U.S. Senate to move swiftly to confirm Ms. Kraninger. It is imperative the Bureau has a fulltime director to fulfill its mission of making our markets work for consumers, responsible financial institutions and the economy. In order to give the Bureau the long-term stability it needs to fulfill this mission for years and decades to come, CBA will continue to advocate for a bipartisan commission."
Speaking of a commission… Sen. Mike Rounds (R-S.D.) noted the need for a commission instead of a single director at the commission prior to his vote in support of Ms. Kraninger.
Day at the Bank: CBA and U.S. Bank hosted a Day at the Bank yesterday with Representative Anne Wagner (R-Mo.) at a branch in her district located just outside of St. Louis, Mo.  During the meeting Frankie Eichenberger, Regional Market President, and Katie Johnston, Branch Manager, discussed the local economy, the benefits of the tax cuts and gave an overview of the products and services they provide to the community. CBA’s Sam Whitfield was also in attendance and touched on a number of advocacy issues such as: AML/BSA reform; tailoring of SIFI regulations beyond the Crapo bill; and reforms to the Bureau of Consumer Financial Protection.

Day at the Bank is an important way to help Members of Congress learn about banking from real bankers. Talk about a great education! If you are interested in hosting a Day at the Bank, please let us know. 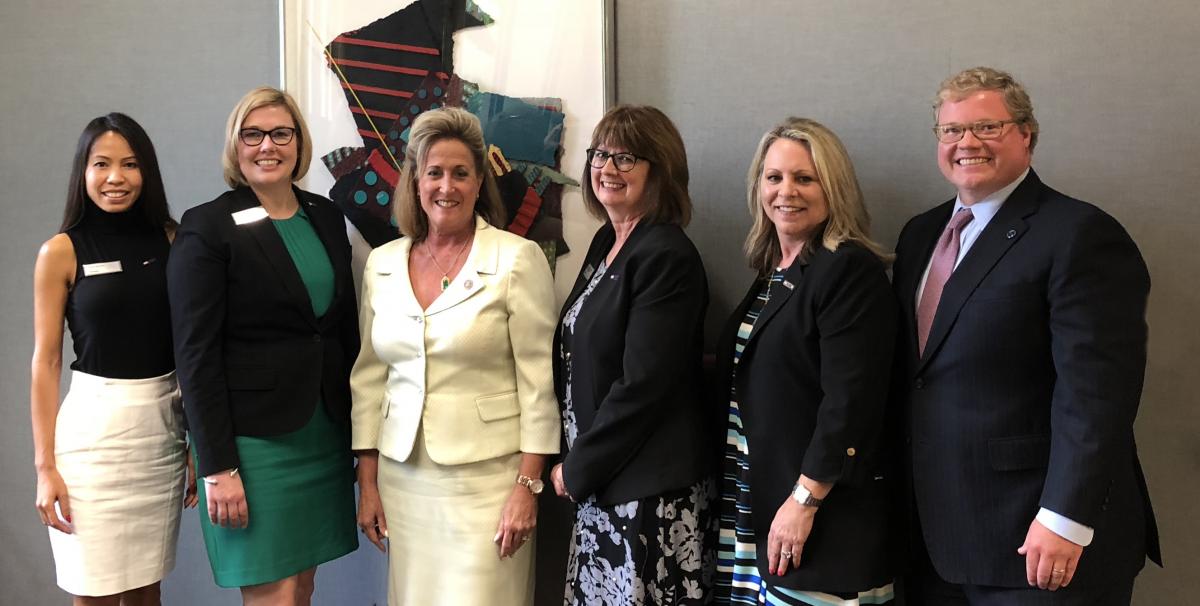 Bank Advisor Fights Blindness: After revealing her personal battle with blindness, bank and regulatory advisor Karen Petrou is urging Congress to pass legislation implementing a plan Petrou and her husband came up with to start a five-year pilot program to finance up to $1 billion in loans to fund new translational research in eye care disease and treatment. According to the Wall Street Journal, “labs and others would get a stamp of approval for projects deemed promising by the National Eye Institute, a designation that could help them line up loans. The lenders would sell the loans to an Eye Bond Trust administered by financial institutions that would package and sell the loans to investors—she envisions 10-year bonds. Investors would be repaid both the principal and interest when the bonds mature, and if a lab’s project turned into a commercial success, the investors could get equity. A government guarantee would partially protect investors if the labs couldn’t repay.”
The bipartisan sponsors are Republican Reps. Pete Sessions of Texas, Fred Upton of Michigan, and Gus Bilirakis of Florida as well as Democratic Rep. Sanford Bishop of Georgia.
Ethical Leadership in Washington: Sadly, many people would think that headline was a joke, but this week I spoke with Bruce Weinstein, aka The Ethics Guy, for a column he is writing on trade association leadership for Forbes magazine. It was a fascinating chat about giving credit where credit is due, taking responsibility when things do not work out and leading with honesty, courage and humility.
INDUSTRY NEWS
Bank Profits Soar in Second Quarter: According to recent FDIC industry data, bank profits broke another record with $60.2 billion in the second quarter as a result of tax reform. FDIC Chairman Jelena McWilliams offered some insight on bank earnings at her first press conference as agency head:
Big Banks Team Up to Fight Human Traffickers: Bank of America, American Express, Paypal and Deutsche Bank are partnering with the Thomson Reuters Foundation, Western Union, Polaris and others to enlist more midsize and small banks in the fight against human trafficking. Banks are often the first line of defense and many large banks are currently working with law enforcement personnel, but a gap exists for smaller financial institutions. This is another example of big banks working toward the common good.
American Banker has a list of “telltale signs” from FinCEN to help identify human trafficking.
Banks Increase Teller Wages: As banks continue to go digital, the conventional wisdom would say branches and tellers are disappearing. But that is not necessarily the case. In many instances branches and tellers are transforming and evolving. Several of the nation’s largest banks – including CBA members Wells Fargo, PNC and Fifth Third – are even raising tellers’ minimum wage to $15 an hour and giving them more responsibility. As Bloomberg put it, “tellers are being upgraded.” Check out the full story.
JP Morgan Chase’s New Mobile Investing App: JP Morgan Chase is launching a new digital investing service called “You Invest” that will be automatically accessible to current online and mobile customers. Everyone who downloads the app or uses the website, preexisting customers as well as new customers, will receive 100 free trades of stock or exchange-traded funds in the first year. The account setup is simple and the service provides investment tutoring to help customers get started.
Citi Invests in AI: Citi has been using open source software provided by Anaconda for several years, but now they are investing in the company’s success. It is another sign banks are investing in AI – with Bank of America, Wells Fargo, BBVA and Ally all deploying AI tools in their business. America Banker reports nearly every major bank is already using the Texas-based Anaconda in some capacity as are other large corporations like BMW, Jeep and Samsung.
AWARDS & RECOGNITIONS
Bank of America Recognized in Fortune Magazine: Bank of America, was ranked #3 of 57 companies in Fortune’s annual “Change the World” list. Bank of America was recognized for its continued commitment to using capital to address environmental sustainability.
PNC Named “Best-of-the-Best” Employer: PNC was recognized as a Top Employer, Top Supplier Diversity Program and Top LGBTQ-Friendly Company by DiversityComm, Inc.

Hurricane Lane Hits Hawaii: Starting Wednesday and continuing into today, Hurricane Lane, a Category 4 storm, poses a threat to the state of Hawaii. As a Louisianan, I know first-hand the impact these storms can have. Everyone on the CBA Team extends our sincerest thoughts and prayers as residents there face dangerous conditions.
Jill Streit Moves Up at TIAA Bank: Jill Streit, Senior Vice President and Treasurer at EverBank has been promoted to CFO of TIAA Bank. We are so happy for this awesome EBS alum – best of luck!
Congratulations to Cathy Myers: After 25 years, Cathy is retiring from U.S. Bank. She noted in her announcement email she has no intention of golfing every day and will continue serving on the CBA Executive Banking School Faculty. Cathy’s dedication to the industry and its future is impressive. I am looking forward to seeing her next year at Furman University and hope she plans to golf at least every other day!
Happy Birthday John Durant: CBA Board Member John Durrant with Capital One recently celebrated a birthday. We will not say which one, but we hope he had a great day.
Michael McFarlane Celebrates 35 Years with Citizens: I am not sure what the traditional 35th anniversary present is, but CBA Education Funding Committee Member Michael McFarlane just celebrated his 35th anniversary with Citizens Bank. Congratulations to Michael for this impressive milestone, which says as much about him as it does to the corporate culture at Citizens.
Congratulations to the Bradshaws: Congratulations to former CBA Team Member Pace Bradshaw with Visa and his wife Kelly on the birth of their third daughter, Reagan.