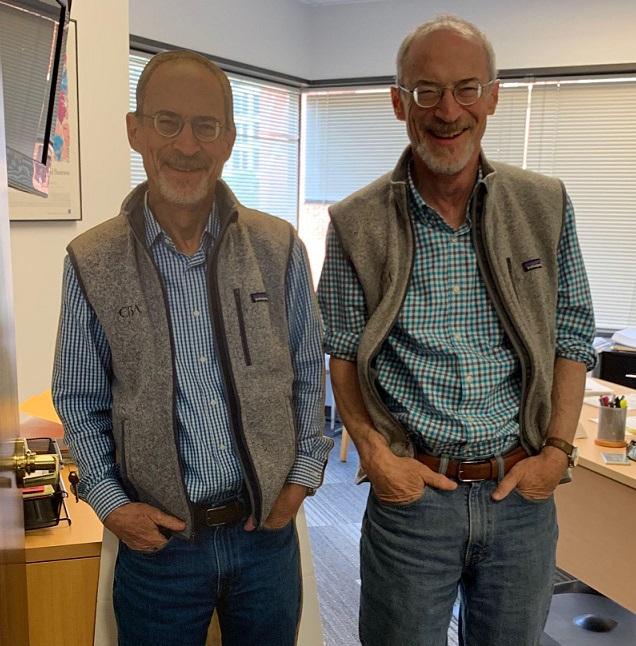 Steve Zeisel, our General Counsel and a very valuable team member for the past 28 years, is departing CBA. Steve had planned to retire at the end of the year but will be retiring effective immediately to concentrate on his health as he’s recently been diagnosed with cancer.

As many of you have witnessed firsthand, Steve is an invaluable source of knowledge and a trusted counselor to all. He earned the respect of regulators and CBA members with his encyclopedic knowledge of banking regulations paired with integrity, civility and wit. We will all miss his anti-trust reminders!

Steve is the conscience of the banking industry, and he will be sorely missed in the office as we continue our work with policymakers. For the CBA Team, having worked with Steve has been the honor of our careers.

As many of you may have seen first-hand, we have a life-size cut out of Steve that floats around our World HQ so he is always with us.

Cajun Thoughts: CFPB LIFTS HIRING FREEZE The CFPB this week posted openings for senior staff positions including Assistant Director for Enforcement – a move indicating the Bureau’s hiring freeze has ended. Other openings posted include Assistant Director for Legislative Affairs and Assistant Director for Financial Institutions and Business Liaison … P2P PAYMENTS EXPANSION Peer-to-peer payments continues to gain popularity among the American consumer. More than 80 million mobile phone users utilized a P2P payment app in 2018, and, according to eMarketer that number is expected to reach 90 million this year. Zelle has already surpassed total usage for 2018 with 163 million transactions in 2019 compared to 157 million for all of last year …  FINANCIAL LITERACY IS IMPORTANT A recent survey by LendEDU found money is the main roadblock for millennials who want to purchase a home and more than half of the participants who do not own said they lacked knowledge on the mortgage process. As part of a community series organized by SunTrust, officials created a panel of former athletes to speak to Norfolk University students about financial literacy. This is an awesome idea and other institutions should follow suit! … CHAIRWOMAN WATERS PUSHES BANKS TO RAISE MINIMUM WAGE House Financial Services Committee Chairwoman Maxine Waters called on big banks this week to raise minimum wage to at least $20 an hour this year, and also to consider ways to lower the CEO-Worker Pay ratio. The nation’s largest banks offer competitive wages and routinely provide benefits like paid PTO, insurance and retirement. Following the 2017 Tax Law, many banks passed savings along to employees through raises or bonuses and communities through charitable donations … REP. SEAN DUFFY TO RESIGN Rep. Sean Duffy, R-Wis., is resigning from Congress to spend more time with his family. Duffy is a member of the House Financial Services Committee and often pushed to reform the Consumer Financial Protection Bureau.

CFPB Releases Report on Consumer Credit Card Market: The CFPB released its fourth biennial report on the state of the credit card market, covering 2017-2018. The report found the credit card market has remained stable largely due to low unemployment rates, modest wage growth, and high consumer confidence in 2017 & 2018. Consumer satisfaction with credit cards remain at record highs in 2018. Late payment and default rates have risen slowly over the two years examined but are still below pre-recession levels.

Additionally, the following findings are highlighted throughout the report:

The report is available here.

U.S. Bank to Add More Features to Mobile App: U.S. Bank's mobile app is now available on Android devices and the bank has added a Spanish language option. Earlier this year, the bank did a complete renovation of its mobile banking app to enhance features and more directly respond to consumer behavior trends. Four months ago, U.S. Bank added “Insights,” a platform offering an AI-driven of personalized finance management, and bank officials said the tool has been used 100 million times by customers. The digital transformation just keeps evolving!

Chase and M&T Bank Adding Branches, Making Changes in Delaware: Chase Bank is adding five branches in the northern Delaware area as part of its ongoing regional expansion, and M&T Bank is renovating 38 Delaware locations. Bank officials said the new Chase branches will combine recent technological innovations with traditional brick and mortar branch operations. Associates will have tablets to greet and help customers on the spot. M&T Bank is slated to spend $9 million to renovate the 38 Delaware branches by the end of the year, featuring new designs and upgraded technology.

CBA Summer Day of Fun: One of my favorite traditions at CBA is our multiannual Day of Fun! Our summer event took place on Tuesday and kicked off with CBA trivia with questions ranging from CBA member bank information to the history of money. We continued the day at SPIN, a venue offering all things ping pong where we were able to learn from a professional table tennis player and play in our own tournament! A few photos from the day are below.

Valley National Bancorp Receives Approval for the Acquisition of Oritani Financial Corp. From the Office of the Comptroller of the Currency

CBA’s State of the Week is WASHINGTON, home to Banner Bank, where more than a quarter of Evergreen State residents bank with a CBA member! CBA members in Washington hold $171 Billion in total assets, employ 37,000 people, provide $3.8 Billion in small business loans and serve 3.6 Million customers. Check out our state by state numbers here.