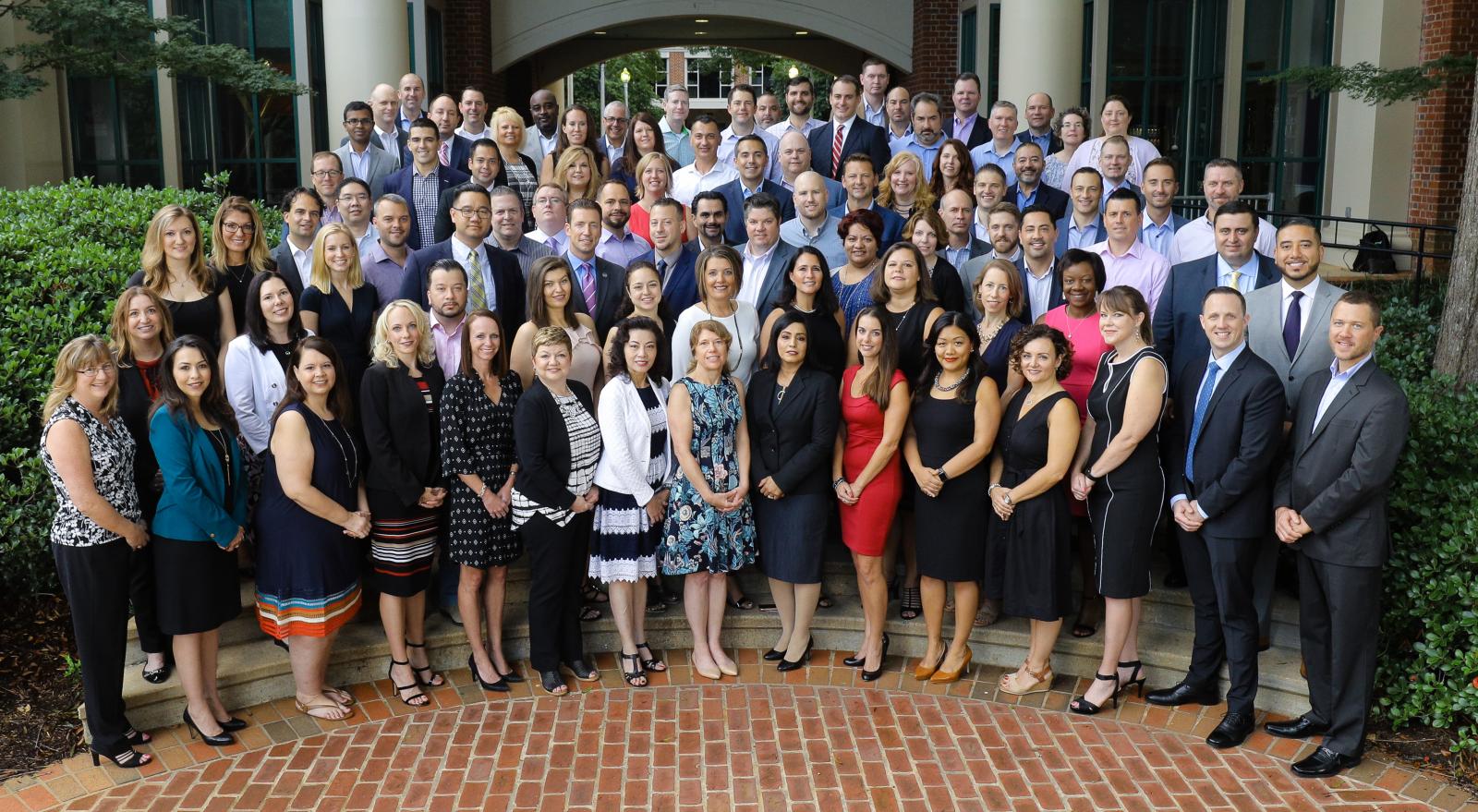 Banking School in the Books: Executive Banking School is in the books. EBS is one of my annual highlights and this session – the 67th – delivered once again as we had 89 graduates and nine honors grads. The dedication each of these bankers has shown to their EBS courses is a testament to their work ethic and the importance the leadership at their banks puts on continuing education. After three years of rigorous study, including one-of-a-kind simulation exercises, I am confident our graduates are well equipped to successfully lead the industry into the future. The retail banking industry is in excellent hands with these remarkable individuals!

A special thanks to all of our faculty, including Faculty Advisory Chair Paul Leventhal, First Year Leader Mike Allen, Second Year Leader Maureen Sullivan of Bank of America and Senior Leader Ted Brauch of Citigroup.

KeyBank’s Christopher Manderfield Takes Top EBS Honor: Our 18th Tem Wooldridge Award winner was Christopher Manderfield of KeyBank. He was selected by the CBA Executive Banking School faculty, with input from his senior class peers, to receive this award. This prestigious honor recognizes the top student who demonstrates outstanding academic performance, high integrity and a strong work ethic. In addition to academic merit, Tem Wooldridge Award winners possess the necessary character and leadership skills to bring out the best in their teammates. Presented annually, the award was established to honor a now-retired faculty member. 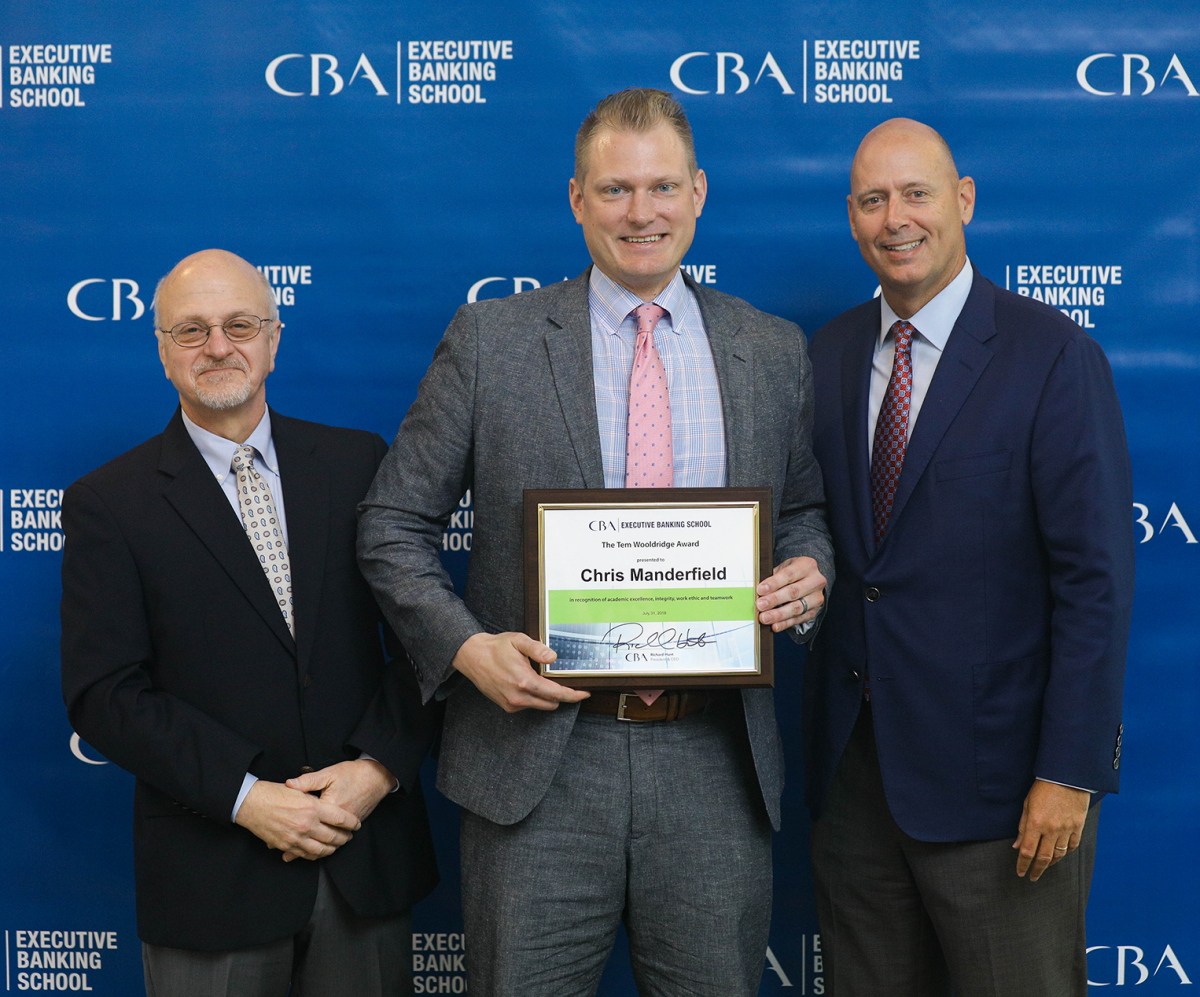 Meeting with the OCC: Just a little while ago, members of CBA’s Community Reinvestment Committee and the CBA Team met with Comptroller of Currency Joseph Otting to discuss the much anticipated CRA reform process. Here is what we learned: The OCC is now planning to release its advance notice of proposed rulemaking (ANPR) on the Community Reinvestment Act sometime in late-August or early-September, and the ANPR will be issued by the OCC alone. We will let you know when it is released, and all CBA members - whether national banks or otherwise - are encouraged to comment.

This is a key issue for CBA Members and we have been following it closely – submitting comments and working with the OCC every step of the way to ensure your views are taken into consideration. Stay Tuned!

Senate Postpones Kraninger Vote: The Senate Banking Committee was originally scheduled to vote yesterday on Kathy Kraninger's nomination to be the Director of the Bureau of Consumer Financial Protection. The Senate, however, finished all "must-pass" legislation for the week Wednesday afternoon and postponed the vote. Senators have left town through August 13, 2018, and Members of the Banking Committee will likely vote on Ms. Kraninger's nomination when they return.

This bill is for messaging purposes and will not see any action in the Senate during this Congress. A copy of the bill is available here.

I do not have to tell you overdraft protection is optional, requires proactive enrollment and, according to research, customers using the service reported a clear understanding of the process. You also know all too well about half of all Americans do not have the necessary funds to fully cover unexpected expenses. That is why they often partner with their financial institution through overdraft protection services to ensure emergency bills are paid – without having to turn to payday lenders, pawn shops or more costly sources of cash. The service also helps consumers avoid merchants’ nonsufficient fund fees and potential damage to credit history resulting from unpaid bills.

The legislation's main points are below:

Treasury Issues Fintech Report: Earlier this week the Treasury Department released a report on Fintech and Innovation, issuing broad and specific recommendations to empower consumers and to facilitate innovation in the U.S. financial system. This report hits all the right topics to promote innovation and empower consumers in a modern, increasingly digital banking system.

The report is part of Treasury’s effort to implement the President's Executive Order on Core Principles for Regulating the United States Financial System. Treasury made the following recommendations:

Here are my thoughts on the report…

OCC Fintech Charter Moving Ahead: Shortly after Treasury released its fintech report, the Office of the Comptroller of Currency announced it would consider special-purpose charter applications from fintech firms. Comptroller Thomas Curry first proposed issuing charters but the plan did not move forward, in part because it was met with resistance from various state regulators.

In a release announcing the decision Comptroller Joseph Otting said, "The federal banking system must continue to evolve and embrace innovation to meet the changing customer needs and serve as a source of strength for the nation's economy. The decision to consider applications for special purpose national bank charters from innovative companies helps provide more choices to consumers and businesses, and creates greater opportunity for companies that want to provide banking services in America."

The OCC noted any firms receiving a charter must meet all capital and liquidity requirements, contingency planning and the "heightened supervision" of a traditional bank. The OCC also clarified fintechs would be "expected to make a commitment to financial inclusion and develop."

As long as there is a level playing field, I say, “Bring it on!”

Senate Passes Flood Insurance Extension: Before leaving town for an abbreviated August recess, the Senate passed, 86-12, a four-month extension of the National Flood Insurance Program just hours before the program was schedule to expire. The House of Representatives passed the extension last week before adjourning until September. The program has been operating under a series of stop-gap extensions since a full five-year reauthorization lapsed last year. Expanding the private flood insurance market has remained a hurdle to a full reauthorization in the Senate.

A copy of our letter is available here.

PNC Goes Mobile: No, I am not talking about a new App for your phone… PNC is literally going mobile with a “bank on wheels” to help customers following disasters. But the bank-mobile has more uses than that. You can catch the three units in Pittsburg cruising anywhere from concerts to Steelers games.

Check it out and hear from CBA Chair Elect Todd Barnhart here.

Chase’s Cardless ATMs: As CBA Board Member and Chase Chief Administrative Officer Sol Gindi said, “Cardless no longer means cashless” at Chase. The bank announced customers could now use their phones to access nearly all of Chase’s 16,000 ATMs. Starting this week, customers only need to tap their smartphone on an ATM to easily and securely access their accounts. It is just another way banks are on the leading edge of technology, innovation and customer service.

Money Transfer War Wages On: We do not often think about banks saving relationships, but we are. Someone told a member of the CBA Team electronic money transfer services not only made it easier to go out with his friends, it also made paying wedding bills a breeze. It was a timely conversation as the war between Venmo and Zelle continues to wage on. The Wall Street Journal discussed the digital battle this week, noting “The U.S. volume of person-to-person payments sent online or via mobile phone increased 21% to $348 billion in 2017 from the previous year … In the second quarter of 2018, Zelle handled $28 billion in payments, up 12% over the previous quarter. PayPal recorded about $33 billion of person-to-person payments in that same period, up 10%.” Currently, two dozen banks representing half of all U.S. deposits use Zelle and about 120 more are set to join. I know just about every member of CBA’s mid-tier forum has plans to do so. Services like Zelle and Venmo aren’t the future – They are the now! Zelle’s success is a key to the industry’s continued digital dominance.

Education Council Chair Michelle Lee: With EBS wrapping up this week, it is a great time to highlight the contributions of CBA’s Education Council Chair Michelle Lee with Wells Fargo. She does a fantastic job ensuring CBA’s school and OnSite education programs are best in class. At Wells Fargo, Michelle leads community banking for the eastern region – which spans 14 states and D.C. with more than 2,700 banking stores and 5,100 ATMs. She joined Wells Fargo (then First National State Bank) as a teller in 1984 and worked her way up, taking on increasing responsibility and leadership.

I am not sure how Michelle finds the time between her responsibilities at Wells and her dedication to CBA, but she is an active member of the community, serving on the boards of many organizations including Alvin Ailey Dance School Foundation, Junior Achievement USA, and is a member of Women Executives of Charlotte. She is a former board member of Junior Achievement of New Jersey, New Jersey Performing Arts Center, Greater NY YMCA, Select Philadelphia, and Alliance for Lupus Research. Michelle graduated from Boston Conservatory of Music with a Bachelors in Music, Applied Voice. How is that for well rounded?

Learning from LeeAnne Linderman: LeeAnne Linderman might be retiring from Zions after a 26-year career, but it is not stopping her from sharing her first-hand insight. LeeAnne is the executive vice president of enterprise retail banking and a member of the company’s executive management committee where she was responsible for nearly 450 branches spread over 11 states. Her list of accomplishments – and responsibilities – at Zions is too long to list, but I wanted to share her three pieces of advice:

To learn more about LeeAnne, her role at Zions and her “Wisdom from the C Suite,” click here.

Thanks for all you have done for the industry and best wishes for a well-earned retirement!

Longtime CBA Member Margie Lawless Retiring: Margie Lawless, Head U.S. Personal & Business Banking Risk Management & Control at BMO-Harris, announced that after 26 years with the bank she is retiring at the end of the month. Margie has been a real champion for CBA – having attended her first CBA conference (pre-CBA LIVE) back in the early 1990s. Not only has she witnessed the industry and CBA’s evolution, she helped shape it. Congratulations to Margie and hopefully she can make one more Risk Committee call for old times!