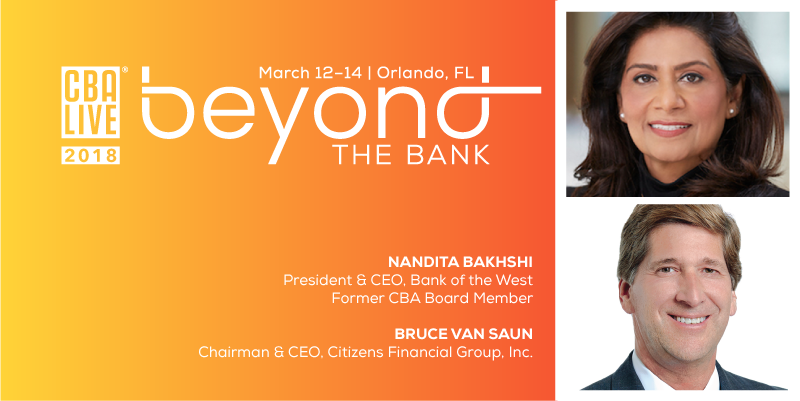 CBA LIVE Speakers Announced: CEOs of Citizens Bank and Bank of the West

CBA LIVE is proud to announce two powerhouse additions to our speaker lineup. Former CBA Board member and current Bank of the West President and CEO Nandita Bakhshi will team up with Citizens Financial Group, Inc. Chairman and CEO Bruce Van Saun to discuss disruption, innovation, moving beyond conventional thinking and their visions for the future of banking. You will not want to miss this! Join us March 12-14 in Orlando and be sure to register today to take advantage of our early bird rates.

A big thank you to CBA Board Chairman Brad Conner of Citizens Bank for hosting me in Massachusetts this week for CBA’s December Board call. The CBA Family would like to welcome Scott Peters of Regions and Jim Peterson of TD Bank to our Board of Directors. We would like to thank former Board Members John Owen of Regions and Michael Rhodes of TD Bank for their contributions. Additionally, Mike Aust of Comerica will serve as head of CBA’s Government Relations Council. I always enjoy these opportunities to hear from CBA’s Board about the state of the industry and the current regulatory environment’s impact on banks and consumers.

Here are a few takeaways from the meeting:

Following former CFPB Director Richard Cordray’s decision to step down as head of the agency to run for Ohio Governor, OMB Director Mick Mulvaney was appointed acting director and has had quite the busy start. Here are a few of Mulvaney’s first actions:

We expect President Trump to move quickly on appointing a permanent CFPB director, but until that time comes Acting Director Mulvaney can serve in the role for 221 days. I hope President Trump’s appointment will be the last sole director and Congress adopts legislation establishing a bipartisan commission at the CFPB.

One of the last Obama-era banking regulatory heads still holding their position is FDIC Chairman Martin Gruenberg, but that should change shortly. President Trump has nominated Fifth Third’s Chief Legal Officer Jelena McWilliams to serve as Chair. I have met Jelena over the years and she possess a unique combination of policy, regulatory and banking experience. I am confident her background and leadership abilities will be a tremendous asset to the agency, the banking industry and consumers. Moreover, Jelena has a remarkable story. Arriving in the U.S. from Yugoslavia with a mere $500 in her pocket, she has worked hard and overcame many obstacles to get where she is today. Raised under a communist regime, she strongly believes in the benefits of markets and entrepreneurship.

CBA has long championed the need to limit the cost of college tuition, reduce student debt and ensure borrowers know the total cost of their federal student loan before they owe – concepts private student lenders take very seriously. Recently, House Education and Workforce Committee Chair Virginia Foxx (R-NC) introduced a bill which addresses some of these issues. However, expanding direct loan limits, as this bill proposes, will encourage colleges to increase tuition and further expands the trillion dollar federal loan portfolio. Many of CBA’s members are ready and willing to provide additional funds to students and their families, but are currently crowded out by the federal government’s over-lending. When it comes to reform, CBA supports an approach which accommodates those most in need, while also allowing students access to private market options.

As 2017 winds down, Congress has taken significant steps to move key pieces of legislation. On the tax front, the House and Senate will head to a conference committee to iron out the differences in their separate bills. This is a step forward for pro-growth tax reform and Congress is working diligently to pass a final bill before the year ends. Additionally, the Senate Banking Committee passed a bipartisan financial reform bill with four Democratic votes. Overall, CBA appreciates Banking Committee Chairman Mike Crapo’s (R-ID) efforts to bring needed regulatory relief, however, establishing a bipartisan commission at the CFPB should be a key tenant of any reform measure. You may view a summary of the Senate bill here.

CBA is glad to welcome Conduent to the CBA family and we are excited to have them with us exhibiting at CBA LIVE 2018: Beyond the Bank.

Jelena McWilliams: From Belgrade to the Pinnacle of Washington’s Banking World

Sheila Greenwood was named senior advisor at the CFPB on an interim basis. She currently serves as chief of staff at the Department of Housing and Urban Development. 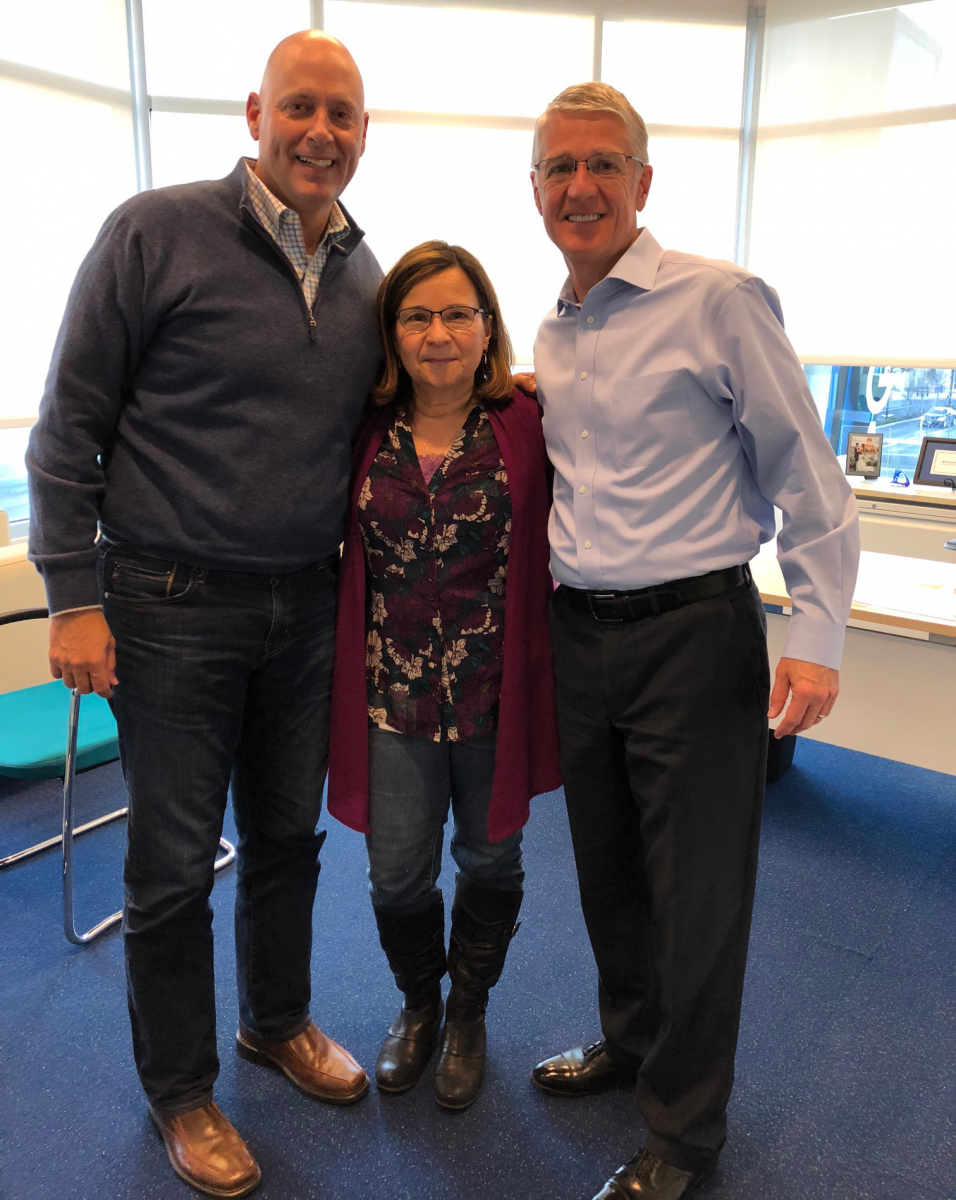 CBA President & CEO Richard Hunt (left) joined CBA Board Chairman Brad Conner (right) at Citizens Bank in the Boston area this week to host a CBA Board Meeting by phone.  Richard and Executive Assistant Geri Tatangelo (center) sported their jeans in preparation for CBA LIVE 2018: Beyond the Bank, March 12-14 in Orlando.