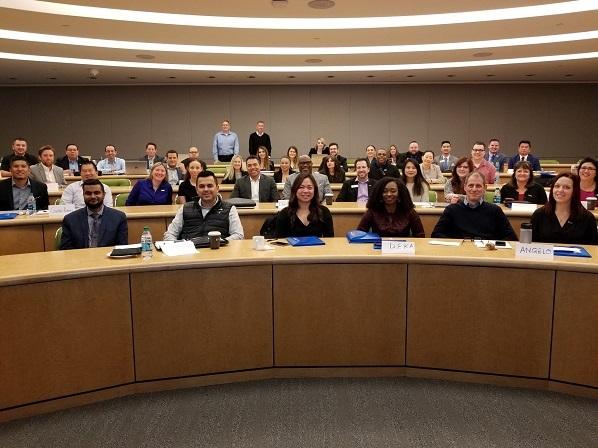 Interested in bringing an OnSite program to your bank? Learn more about MarketSim and explore other CBA OnSite Education Curriculum here!

Cajun Thoughts: MERGERS & ACQUISITIONS The 2018 numbers are in and there are 5% less banks in this country for a total of 4,774. And, just this week, Chemical Bank and TCF Bank announced plans to merge and keep the TCF Bank name creating a premier institution headquartered in Detroit. This will be one of the largest banks in the region with $45 billion in assets … SHUTDOWN AFTERMATH I really have no clue what will happen come the new shutdown D-Day on February 15, 2019 but I am hopeful Congressional leadership and President Trump will work together to avoid another shutdown … CASHLESS SUPER BOWL Visa envisions the first cashless Super Bowl to take place during its NFL sponsorship renewal through 2025. While it won’t happen this year, possibly by 2021 when Tampa hosts Super Bowl LV. I don’t know if it will be cashless, but I do know the Dallas Cowboys will be there!!! …  A MUST READ I recently read House Majority Whip Steve Scalise’ book ‘Back in the Game: One Gunman, Countless Heroes, and the Fight for My Life’ where he details his experience being shot at a Congressional baseball practice. His story of recovery and returning to Congress is so powerful … SUNTRUST GOFUNDME Great CBA member SunTrust Bank launched a GoFundMe page for the five victims of the Jan. 23, 2019 Sebring, FL branch shooting. 100% of contributions will be donated to the Sebring Strong Survivors Fund. The support from the community, banking industry, and beyond is inspiring … 2020 ELECTION Those expected to run at a minimum for President on the Democratic side are: Sen. Cory Booker, Sen. Kirsten Gillibrand, Sen. Kamala Harris, Sen. Elizabeth Warren, Rep. Tulsi Gabbard, Sen. Bernie Sanders, Sen. Sherrod Brown, Sen. Amy Klobucher, Rep. Beto O’Rourke, Former Rep. John Delaney, Former NYC Mayor Michael Bloomberg, Former HUD Secretary Julian Castro and Former Vice President Joe Biden … ECONOMY The Labor Department reported this morning the U.S. economy created 304,000 jobs in January, an upsurge from 222,000 in December. The unemployment rate was reported 4 percent, up from 3.9 percent in December.

More than 1,500 senior bankers and industry leaders gather from across the country to experience this premier event. We are on pace to surpass all our previous attendance records. Make sure you have a spot…

Register here to be part of CBA LIVE 2019: The Currency of Now taking place April 1-3, 2019at the Gaylord National Harbor in Washington, D.C. to mark the 10th year of retail banking’s premier event, and 100 years of the Consumer Bankers Association. We have many surprises in store!

Congress passed a short-term funding resolution last Friday, just hours after President Trump announced he would support legislation reopening the nine shuttered federal agencies even if it did not contain funds for a wall along the southern border.

In addition to reopening the government, Congress created a bipartisan, bicameral committee to develop an immigration reform package. If Congress fails to act on the immigration reform proposal by February 15, when the short-term funding passed Friday expires, President Trump said he would resort to another shutdown or declare a national emergency along the border so he could unilaterally redirect already appropriated funds to construct a border wall.

The legislation is similar to bipartisan legislation introduced in the last Congress and would require the disclosure of information on the total cost of federal student loans in the form of an annual percentage rate (APR). This clear disclosure would help borrowers compare federal and private student loans on equal terms. Currently, federal loans do not factor in origination fees, which can range between 1.1 – 4.26 percent, in interest rate disclosures. Private student loans, on the other hand, do not charge origination fees, provide detailed disclosures tailored to each borrower and can offer better options for many borrowers.

The federal government currently originates approximately 90 percent of federal loans. These loans do not have disclosure forms tailored to each borrower and have double-digit delinquency or default rates.

In creating the new Diversity and Inclusion subcommittee, Chairwoman Waters said her intention is to look at levels of women & minority representation among senior management in the financial services industry and consider methods to promote diversity. A first effort will likely be assessing what impact federal regulators’ Offices of Women and Minority Inclusion (OMWIs) have had on their own agencies since their creation in 2010 under Dodd-Frank.

TCPA Could Be Headed to The Supreme Court: Yesterday, Crunch San Diego filed a petition for writ of certiorari for their case to be heard in front of the Supreme Court. Crunch was the appellee in the Ninth Circuit Court decision that established a broad definition of “automatic telephone dialing system” (ATDS) which stood in contrast with decisions from the Third Circuit, and most notably the D.C. Circuit’s decision in ACA International v. FCC (to which CBA filed an Amicus brief).

This is a great opportunity for the industry on TCPA, and we will be evaluating ways for CBA to get involved. More specifics about the case below:

Webster CEO Cuilla Survival Strategies: In a recent interview with American Banker, CEOJohn Cuilla of Webster Financial reflected on his time in charge of the midsize bank the past year. When he took over as the first non-founding family member chief executive, Cuilla was determined to continue running the bank with the same culture and strategy including credit risk management, technology investments and deal making. Read more about Cuilla’s leadership and survival strategies here.

ICYMI: Wall Street Journal examines some of the banking policies Sen. Elizabeth Warren (D-Mass.) will be advocating for during her presidential campaign. The article is available here, along with my mention of the tremendous strides the industry has undergone since 2008.

Our State of the Week is SOUTH CAROLINA, where more than 1 out of every 3 residents banks with a CBA member! CBA members in South Carolina hold $74 Billion in total assets, employ 16,000 people, provide $1.7 Billion in small business loans and serve 1.9 Million customers. South Carolina is also home to CBA Executive Banking School at Furman University. Check out our state by state numbers here.