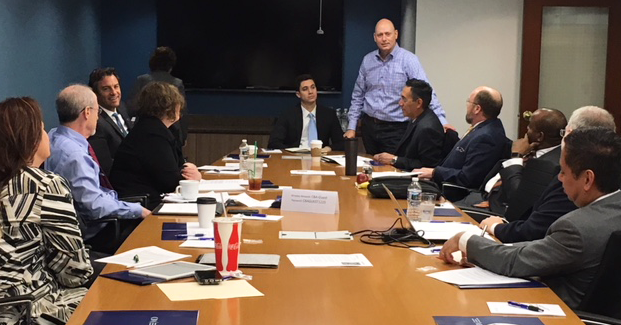 Hot Out of the CFPB

According to Acting Director Mulvaney, the CFPB has “committed to fulfill the Bureau's statutory responsibilities but will go no further.” Plain and simple.

CBA Meets with Acting CFPB Director Mulvaney – CBA General Counsel Steve Zeisel and I met with Acting Director Mulvaney at the agency’s HQ this week. We took the opportunity to share our priorities and regulatory reform proposals to better balance consumer protections with access to credit. Bottom line: It is a new CFPB.

RFIs Keep On Rolling In – The Bureau is soliciting more feedback, this time on its Supervision Processes. This adds to a running – and growing – list of RFIs and CBA will provide comments on them.

Looking for the List? – We’re keeping close tabs on the RFIs coming down the pike:

CRA Reform Takes Center Stage – CBA’s General Counsel Steve Zeisel penned an op-ed in American Banker this week making the case for a 21st century approach to the Community Reinvestment Act. Reform to the 40-year old law is coming – no question about it – and Steve highlights how meaningful reforms will work to benefit consumers. Be sure to read his piece here. THIS WEEK, MEMBERS OF CBA'S COMMUNITY REINVESTMENT COMMITTEE WERE IN WASHINGTON, DC TO DISCUSS CRA REFORM AND MEET WITH REGULATORS FROM THE OCC.

BofA’s CEO Brian Moynihan – I had the pleasure of seeing Bank of America’s CEO Brian Moynihan speak at the Economic Club of Washington this week. I have to say, it was a great speech. And I had a front and center seat to boot. Here are a few takeaways from his remarks:

Volatility, You Say? – With recent stock market volatility, will the Federal Reserve alter its plan to gradually raise rates? Fed Chair Jerome Powell said this week, "The Fed is in the process of gradually normalizing both interest-rate policy and our balance sheet.”

Reinforcements on the Way – Rumors are swirling and Federal Reserve Bank of Cleveland President Loretta Mester is under consideration as vice chair of the Federal Reserve. It’s too early to tell, but the Fed does have several seats that need filling.

Catch Rockland Trust CEO Chris Oddleifson – Did you miss Rockland Trust CEO Chris Oddleifson on “CEO Corner” this week? It was a great interview and he highlighted how banks win when they build strong relationships with customers and local communities. He also touched on the impact of the harmful Durbin-Interchange Amendment and previous CFPB regulation. It is this week’s must watch clip.

Join Senior Leaders at CBA LIVE – A record number of senior bankers and industry leaders alike have registered for CBA LIVE: 2018 Beyond the Bank. Join me us in Orlando to catch:

We will also be hosting Super Sessions on marijuana banking and fraud as well as an all-things-Washington general session. Register today!

Allison Dukes of SunTrust – Congrats on being promoted to chief financial officer.

Erminia Johannson of BMO Harris Bank – New gig for Ms. Johannson as she takes over as group head of U.S. strategy for personal and business banking.