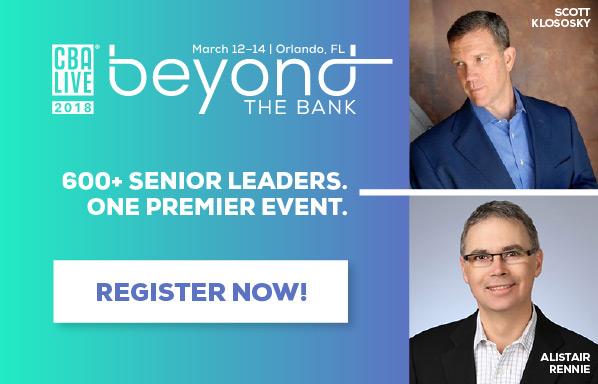 Hot Out of the CFPB

Court Overrules CFPB Overreach – Picture this: You receive a traffic ticket and all of a sudden, a clerk in the courthouse decides to increase your fine by 1,500 percent. Well, that is what the CFPB did when it amplified a penalty levied against mortgage lender PHH Corp. by nearly $100 million. Thankfully, the U.S. Court of Appeals decided to repeal the amplified penalty on PHH, which undermined the longstanding application of RESPA. CBA supported PHH matter

Congress, Your Work is Not Done – While the Court also ruled the CFPB’s governing structure is not unconstitutional, it does not mean its current structure is appropriate for the Bureau’s long-term credibility. Congress should create a bipartisan commission at the CFPB, in place of a sole director, to uphold the Bureau’s mission of consumer protection. A commission would establish transparency, diversity of thought, additional industry insight and rules to benefit consumers, the industry and the economy.

Do I Sense a Bit of Sarcasm? – Following the decision, House Financial Services Committee Chairman Jeb Hensarling (R-TX) offered his two cents saying, “Court” The Chairman’s quote illustrates why CBA has been arguing for a CFPB commission for so long. The pendulum of political power can swing rapidly between administrations causing the Bureau to take abrupt changes in policy. Per Chairman Hensarling, he is "ready to work with Democrats to reform the CFPB” and we maintain a bipartisan commission would not only place a check on the enormous powers of a single director, but provide for smooth leadership transitions.

Mulvaney Realigns CFPB’s Internal Structure – Acting CFPB Director Mick Mulvaney reworked the CFPB’s internal structure by shifting the focus of the Office of Fair Lending and Equal Opportunity to advocacy, coordination and education – and away from enforcement. The office also will move under the umbrella of the Office of the Director.  The fair lending enforcement and examination teams will remain with the division of Supervision, Enforcement and Fair Lending. Additionally, the CFPB’s Office of Consumer Response is being moved into the Consumer Education and Engagement division.

CFPB Issues RFI on Administrative Adjudications – The Bureau is asking for public input to better understand the benefits and impacts of administrative adjudications. This is the second in a series of RFIs announced by Acting Director Mick Mulvaney. Comments are due in 60 days.  CBA will be forming a working group to help respond to the RFIs, which are expected to be issued weekly over the next few months.  Future topics may include enforcement process, supervisory process, rulemaking process, the complaint process and data policy, among others.

CBA Supported MOBILE Act Passes House – In a show of bipartisan support, the House overwhelmingly passed the Making Online Banking Initiation Legal and Easy (MOBILE) Act by a vote of 397 to 8. CBA has long supported this bill, which provides opportunities for consumers to open bank accounts without having to visit a physical branch. We will continue to push for Senate passage.

Janet Yellen’s Swan Song – At its final meeting under outgoing Chair Janet Yellen, the Federal Reserve left interest rates unchanged and said it expects inflation to rise to its 2 percent target. Jerome Powell will take over as Fed Chairman this weekend and we thank Chair Yellen for her dedicated services over the years.

Connect with 600+ Senior Retail Bankers – Where will you be March 12 – 14, 2018? I know where I will be: CBA LIVE 2018: Beyond the Bank. Along with 600 plus senior retail bankers. Join me and other industry leaders in Orlando to catch General Michael Hayden, former Director of the CIA and NSA, Bank of the West CEO Nandita Bakhshi, Citizens Financial Group CEO Bruce Van Saun, Alistair Rennie, General Manager of IBM Watson Financial Services, and Scott Klososky, Founding Partner at Future Point of View. We will also be hosting Super Sessions on marijuana banking and fraud as well as an all-things-Washington general session. Register today! 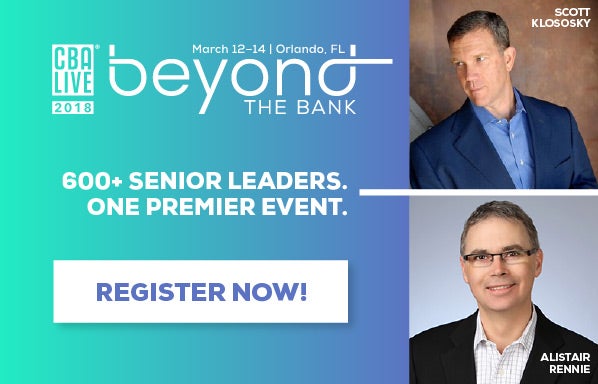 Super Bowl Comes to U.S. Bank – Home to former CBA Board Chair and current Board Member Ross Carey, U.S. Bank will be hosting this year’s Super Bowl! At least in name anyway. The game will be played at U.S. Bank Stadium in Minnesota and I can only imagine how exciting it is for the bank’s employees and customers.

Sue Whitson of BMO Harris – We are proud to have Sue Whitson, CRA Governance Manager, at BMO Harris leading CBA’s Community Reinvestment Committee. This is an exciting time for CRA as it takes the spotlight from federal regulators and her leadership will help guide our association on the advocacy front.