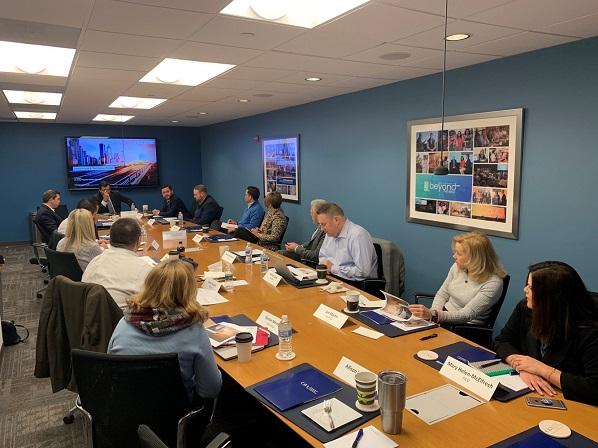 CBA’s Fraud Working Group held their in-person meeting at CBA HQ this week. Participants discussed hot button business topics such as the use of Zelle and real time payments under Regulation E, bipartisan BSA/AML relief and issues around data security. The group also heard from sponsor FICO about global fraud and technology trends.

Cajun Thoughts: CBA STUDENT LENDING ROLLOUT CBA Board Chairman Todd Barnhart of PNC joined us this week at a press briefing to unveil results of our recent student lending poll and reiterate our commitment to responsible private student lending practices. The survey showed voters are concerned about the amount of debt held by the federal government, and support clear and fair disclosure practices. It’s disconcerting to see the public is largely in the dark about the true drivers and impact of what should accurately be called the ‘federal student loan debt crisis.’  It is past time for the U.S. government to end its opaque lending practices and stop the debt trap created by virtually unlimited federal lending … BANK AUTO LOANS PERFORMING Recent data from the Federal Reserve Bank of New York reports over 7 million auto loans are more than 90 days delinquent. While this number may appear concerning on its face, digging deeper shows a large reason the figure is so high is due to a boom in auto loan originations, and auto finance companies originating more loans to subprime customers. This in turn has led to 6.5% of auto finance company loans going delinquent, a significantly higher rate than banks. Despite these figures, the report states the auto loan market is the healthiest its been since 2000, with more than 30% of auto loans associated with 760 or higher credit scores ... SAMSUNG’S FOLDABLE PHONE Digital innovation is not just impacting banks, but also wireless services. Samsung plans to launch the Galaxy Fold on April 26, 2019 starting at a whopping $1,980. The smartphone’s 7.3 inch display will give the phone’s tablet-sized screen ability to fold into a pocket. While it’s not the only company to develop a foldable device, it’s definitely one of the first to make it broadly accessible …  APPLE & GOLDMAN TEAM UP Apple and Goldman Sachs plan to roll out a joint credit card for testing in the coming weeks and begin issuing cards later this year. The intent is for cardholders to take advantage of extra features on Apple’s Wallet app and efficiently manage their expenses. Will be interesting to see if Apple’s loyal tech-savvy millennial following will turn into Marcus customers.

Join us April 1-3, 2019 in our Nation’s Capital for the 10th anniversary of CBA LIVE and celebrate a century of CBA members financing the American Dream. Register here to save your spot at retail banking’s must-attend event and customize your CBA LIVE experience here.

CBA Challenges Government to End Opaque Federal Student Loan Practices: CBA Board Chairman Todd Barnhart of PNC joined us Wednesday at a press briefing to rollout the results of our recent student lending poll. Mr. Barnhart reiterated CBA's commitment to responsible private student lending practices saying, "We believe our products help set students up for success." According to the CBA-issued survey, Americans strongly believe student loans should carry clear, personalized, plain-language disclosures about the loan’s total costs. These disclosures are not included on federal loans but are already provided by private student lenders.

The poll found nearly 85% support placing responsible caps on federal loans to offer access to a quality education without setting up a debt trap post-graduation.

The government absolutely has a role to play in helping low-to-moderate-income students achieve higher education goals, but it must be done in a responsible manner which does not set families up for failure by offering virtually uncapped loans with little disclosures. Implementing these changes, advocated by CBA, would help lower student debt and college tuition rates, which the New York Federal Reserve found can increase as much as 63 cents for every dollar of available federal aid.

A significant majority voiced concern student loan debt exceeds $1.5 trillion; were troubled by the tripling of federal loans to parents over the past 25 years, mainly through federal Parent PLUS loans, and that personalized federal loan details are not shared with federal loan borrowers as delinquency and default rates continue to worsen.

We’re greatly encouraged by American voters’ unequivocal support for the federal government to adopt basic fair-lending practices that are standard among private lenders. Such practices supported by poll respondents include:

FDIC Issues Latest Quarterly Banking Profile: The FDIC released its quarterly banking profile for 2018 Q4. The banking industry reported another strong quarter as continue to enjoy the second-longest economic expansion on record. The return on assets (ROA) ratio increased to 1.33%, up from 0.58% one year ago. Net income improved thanks to higher net operating revenue and a lower effective tax rate.

As an industry, the Problem Bank List declined from 71 to 60 during the quarter – the lowest since Q1 2007. No banks failed in 2018, and 259 institutions were absorbed by mergers during the year.  While Chairman McWilliams was optimistic about the current industry data, she warned that a cycle of economic expansion and zero bank failures can't last forever, and emphasized that banks and the FDIC must be prepared to weather a downturn.

A copy of this and other quarterly profiles is available here.

FDIC Issues Annual Report: The FDIC last Friday released its Annual Report, summarizing information about the corporation's activities, financial performance and trends of the past year. This is the first Annual Report published by Chairman Jelena McWilliams.

Chairman McWilliams set forth the following priorities for 2019:

Highlights from the Annual Report are below and a copy of the report is available here.

FDIC staff, along with other federal banking agencies, plan to put forth final rules on capital simplification efforts in 2019.

Wells Fargo Donates $444 Million to Nonprofits: Wells Fargo announced yesterday the bank gave more than $444 million to nearly 11,000 nonprofits nationwide in 2018, exceeding their target of $400 million in philanthropy last year. Check out the bank’s “Commitment to Communities” page and a video detailing the impact of their donations.

Household Debt Hits All-Time High: Total household debt reached another record high of $13.5 trillion last year and grew 3% year over year during the fourth quarter of 2018. The pace of growth has dropped from the yearly 4.5% growth seen in 2017 as demand weakens and credit standards tighten. Automotive and student loan debt continue to increase faster than mortgage debt. Learn more here.

Fintech Sandboxes Raise Risk Concerns: There is an increasing need for a product sandbox where banks and regulators can work together. Last week, CBA, along with other financial trades, commented on the CFPB’s proposal to revise its 2016 No-Action Letter policy and establish a product sandbox. Not only is it important to note the collectively voiced need for cooperation with banks, it is also refreshing to hear regulatory heads express similar ideas and talk about coordination across federal regulatory agencies. Learn more about the regulation-free zones or “sandboxes” here.

Our State of the Week is PENNSYLVANIA, where more than 1 out of every 4 residents banks with a CBA member! CBA members in Pennsylvania hold $356 Billion in total assets, employ 60,000 people, provide $8.5 Billion in small business loans and serve 5.5 Million customers. Pennsylvania is home to PNC where CBA Board Chairman Todd Barnhart hails from as well as First Commonwealth. Check out our state by state numbers here.

December 18, 2019
The Devil and the Details of CRA Reform