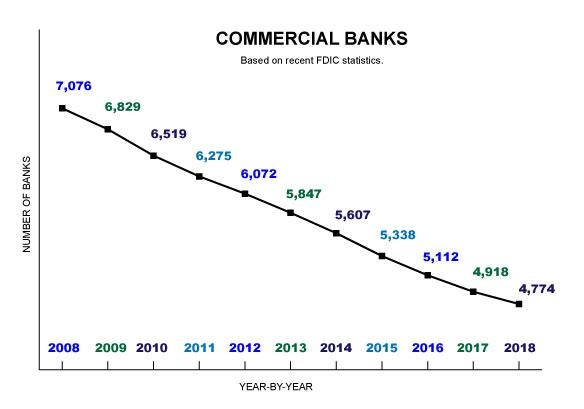 Cajun Thoughts: In my estimation, today is Day 1 of the partial government shutdown as this is the day about 800,000 workers will not receive their paycheck. This shutdown has a much different feel compared to the one in 2013, and even the one in 1995. Both good and bad. First, it is a partial, not complete, shutdown. Obviously, this is still very important, especially to those directly affected. Secondly, the timing. Other shutdowns occurred later in the year, not at the beginning of a congressional session where cordiality usually reigns, and yet here we are today. Lastly, the hyper partisanship is at an all-time high. Both sides are dug in. Get your Snickers bar, this could last a while … HOUSE FINANCIAL SERVICES COMMITTEE The members of the House Financial Services Committee will be announced any moment. We will provide a full analysis, but spoiler alert: You will not like it! More below … OCC COMPTROLLER is hoping to release the CRA ANPR with the FDIC and Fed. Comptroller Otting and FDIC Chairman McWilliams will be speaking at CBA LIVE!

If your bank is sending a group of 15+ people, each registrant receives an additional $300 off! You do NOT need to wait and register as a group to take advantage of this additional discount. Simply register as you normally would and CBA will adjust your registration to the group price once your bank reaches 15+ registrants.

Partial Government Shutdown Update: The shutdown of approximately a quarter of the federal government is now the longest in history as meetings this week between President Donald Trump and Congressional Leaders failed to produce any path forward.

Senate Majority Leader Mitch McConnell (R-Ky.) reiterated his position early this week on the Senate floor saying, "a negotiated solution that can pass the House, earn 60 votes here in the Senate, and get the presidential signature. That's what it takes to make a law. As I've stated clearly, the Senate will not waste floor time on show votes, messaging votes or any other proposals which fail to check those boxes."

In an important update, Congress and President Trump are working on legislation ensuring ALL furloughed employees receive full back pay once the government reopens.

I know many of you have assistance and hardship programs in place to help furloughed federal workers – expect customers to start utilizing them soon. The real estate website Zillow estimates those furloughed employees owe nearly $250 in monthly mortgage payments. So stay tuned and stand ready.

The CFPB also noted an interest in hearing stakeholder input on the reports' findings and conclusions.

The Ability to Repay and Qualified Mortgage Rule Assessment Report is available here.

House Financial Services Committee: Assignments for the House Financial Services Committee will be made any day now. We expect freshman Rep. Alexandria Ocasio-Cortez to get a seat,which raises concerns as she is historically anti-big banks, as reported by POLITICO. Rep. Ocasio-Cortez has been a media star during the 2018 Congressional election cycle, having narrowly beaten longtime Congressman and leader among House Democrats Joe Crowley in the Democratic primary.

“AOC,” as she’s now known in the Washington vernacular, has already become a presence in Congress with her frequent commentaries on social media and non-stop attention from national news outlets. She’s also begun causing consternation among her House colleagues, due to her not-so-subtle threats to support campaigns against any sitting Democrats she deems insufficiently supportive of her allies’ brand of “Democratic Socialist” policy priorities – including Medicare-for-all, a “Green New Deal,” and 70% marginal tax rate on high incomes.

Rep. Katie Porter is also expected to join the Committee. From southern California, Porter was a Professor at the University of California, Irvine Law School, having attended Harvard Law School where she was a research assistant to Sen. Elizabeth Warren, who she considers a mentor (they co-authored a textbook on the Law of Debtors and Creditors). Porter also served on the advisory board of Self Help Credit Union before running for Congress in 2018, where she narrowly defeated incumbent Rep. Mimi Walters in a seat that has traditionally gone to Republicans in the past.

Rep. Ben McAdams is a potential rising star on the other side of the spectrum from progressives as a moderate Democrat running from Salt Lake City against former Tea Party favorite Rep. Mia Love. Many prominent Democrats are hoping to see him succeed and win reelection as a pro-growth, socially-moderate Democrat in heavily conservative Utah to balance out Democrats’ national hope with the new activists in the party hoping to steer the agenda even further to the left.

House Diversity & Inclusion Subcommittee: The banking industry strives for a diverse and inclusive workforce. I am proud of the progress that has been made and the work already being done in communities across the nation. The creation of this new Financial Services subcommittee presents an opportunity to improve the overall approach to diversity and financial inclusion as well as an opportunity to reform legislation such as the Community Reinvestment Act (CRA), a key priority for CBA. Modernizing CRA will ensure investments reach more people and communities in need.

Speaking of…Check out our Community Reinvestment Act microsite to learn more about CRA and how it should be updated to reflect modern banking practices as well as consumer demands.

Fed Eases Internal Stress Tests: The Federal Reserve Tuesday afternoon proposed removing the requirement that banks with assets less than $250 billion continue conducting their own internal stress tests. Firms above the $250 billion threshold would run internal tests every other year. The proposal is in line with the new bank deregulation law, S. 2155, and would also remove the "adverse" scenario from the Fed's stress tests. The "severely adverse" scenario would still apply.

No Bank Failures in 2018:  Big news – 2018 saw no bank failures. The peak was in 2010 when a total of 157 institutions collapsed in the aftermath of the 2008 financial crisis. This was the first calendar year since 2006 without a single bank failure and only the third since the FDIC was established in 1933. Banks are booming, the U.S. banking system is robust and will continue to be strong. The last bank to fail was Washington Federal Bank for Savings on December 15, 2017. The FDIC Failed Bank List is available here.

Dallas Morning News Reorganization: This week, The Dallas Morning News laid off 43 employees in the aftermath of struggles with revenue decline. Staff members affected include writers, editors, photographers and newsroom support personnel – resulting in a 4 percent reduction of the 978 employees working for the parent company A.H. Belo Corporation. The downsize is part of a company-wide reshuffle intended to support and enhance customer service “at all levels.” The reshuffling trend is not just affecting banks. Learn more here.

Interested in being part of our team?  The following job opportunities are currently available at the Consumer Bankers Association:

Director of the Executive Banking School

For more information, check out position descriptions on the CBA Jobs page. Interested parties should send resume and details to the job contact listed within the description or to mauginbaugh@consumerbankers.com.

Stitt To Remove Himself From Company, Trust