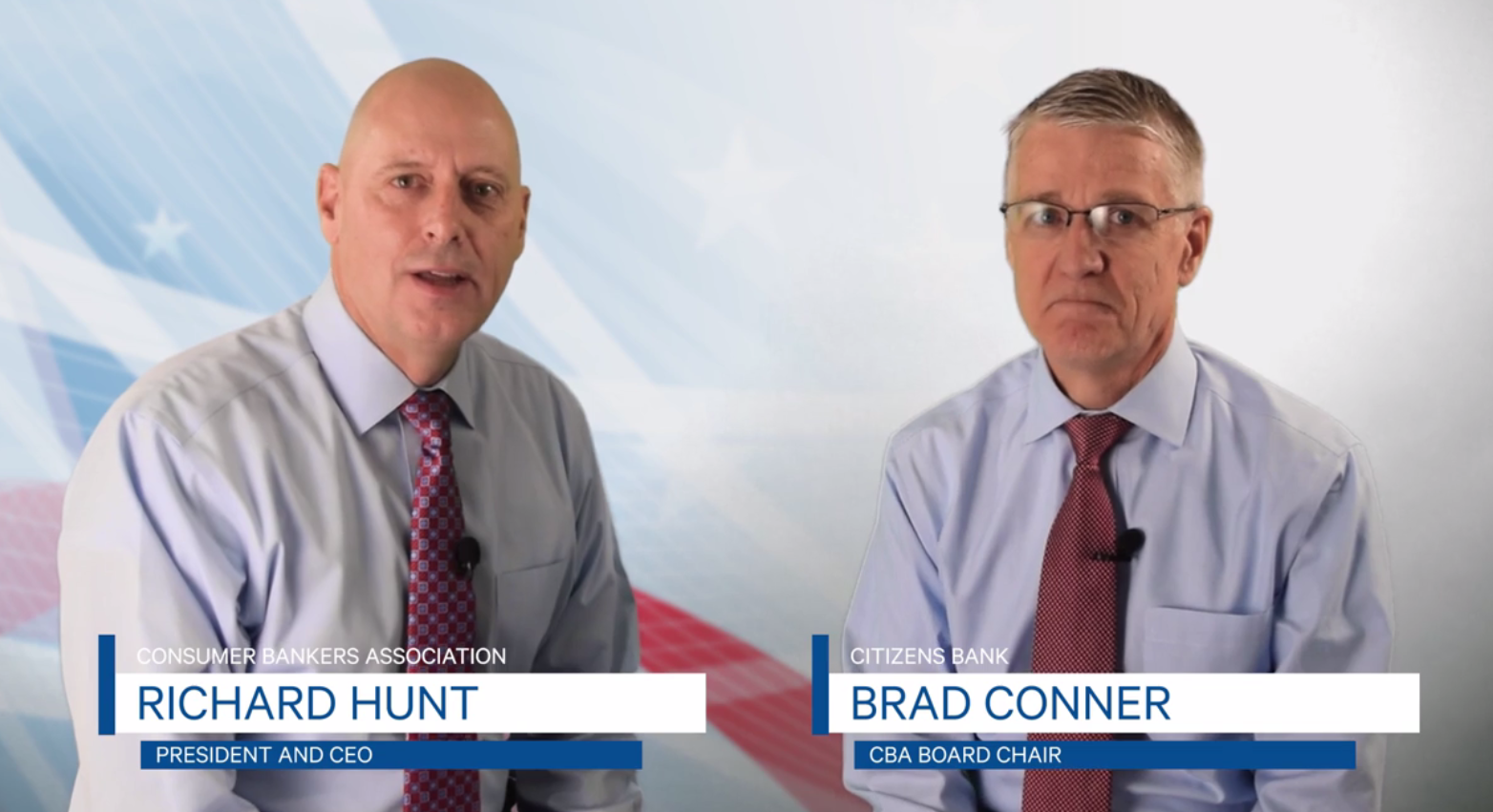 Message From CBA Board Chairman Brad Conner & Me — CBA's Board Chairman Brad Conner of Citizens Bank and I stepped into the studio to record a short video thanking our membership and sharing our goals for 2018 (CFPB Commission, balanced regulation, next generation banking and right-sizing government's role in student lending), recent successes and CBA happenings. Be sure to watch the short video below.

HOT OUT OF THE CFPB

CFPB Acting Director Mulvaney Makes His Mark — There was a flurry of activity coming out of the Mulvaney-led CFPB this week. Let's go day by day:

TUESDAY: CFPB will Reconsider it's Small-Dollar Rule — This is welcomed news for the millions of American consumers experiencing financial hardship and in need of small-dollar credit. Under the current rule, many banks are forced to sit on the sidelines and are prevented from offering affordable and popular small-dollar credit options, such as deposit advance products, to help meet consumer needs. We encourage the Bureau to work with other bank regulatory agencies to change that.

WEDNESDAY: CFPB Requests Public Feedback on its Operations— In layman's terms, the Bureau is asking YOU to provide insight to help ensure the agency is fulfilling its proper and appropriate functions to best protect consumers. Certainty there are many actions conducted previously by the CFPB that warrant a thorough review, such as its complaint portal and small-dollar rule.

The first request for comment is on Civil Investigative Demands (CIDs), and comments received will help the agency evaluate existing CID processes and procedures.

On the Horizon — We are expecting more news out of the CFPB in the coming weeks. CBA will keep our members "in-the-know" on breaking developments.

Bank Regulatory Nominees Pick Up Steam — This week, Fed Governor Jay Powell was approved by the Senate Banking Committee to serve as Fed Chair and Randal Quarles, who also serves as the Fed's chief bank regulator, was approved for a 14-year term on the central bank's board (Mr. Quarles was previously confirmed to fill the remainder of a term which expires January 31). It is good to see nominees with both private and public-sector experience filling these posts. These experiences will prove invaluable at the central bank.

Who's On Deck? — Trump's nominee to lead the FDIC, Jelena McWilliams, current chief legal officer at Fifth Third Bank, along with his pick to join the Fed's Board of Governors, Marvin Goodfriend, an economist and former Richmond Federal Reserve Bank official, will testifybefore the Senate Banking Committee this Tuesday, January 23. After their testimony, the Committee will schedule a vote on their nominations followed by the full Senate.

Keep an Eye Out — No word yet on a permanent successor to former CFPB Chief Richard Cordray, who left the agency to mount a run for Ohio Governor. The rumor mill seems to favorNational Credit Union Administration Chairman Mark McWatters as the top candidate to fill the seat, but there has been some buzz around Johnathan Dever, a Republican Ohio state representative and defense lawyer.

OCC to Banks: Don't Get Complacent — From the OCC's Semiannual Risk Perspective report: "the long economic recovery and expansion may collectively increase lender complacency [...] In this environment, lenders need to focus on maintaining sound credit standards within risk tolerances and understanding the potential credit risks that may be exposed under less benign economic conditions."

More than One Way to Peel an Orange — By the end of 2020, Wells Fargo plans to reduce its branch footprint by 900, including at least 250 this year, noting Americans' increasing preference for online and mobile banking. Well this is not much of a shock, banks have been working to realign their business models and strategies with consumers' changing preferences for years. Storefronts are not going extinct – the bank will still add about 5,000 branches – but digital solutions are without question a big part of banking's future.

As banking regulators take a fresh look at the rules and regulations surrounding the Community Reinvestment Act (CRA), regulators need to understand there is more than one way to provide underserved communities with banking solutions.

Sidebar: CBA met with Comptroller Joseph Otting at the OCC last week and he is committed to meaningful changes to CRA.

Brad Conner of Citizens — There is no better way to kick off a series spotlighting CBA's Board and Committee leadership than by highlighting the work of our fearless Board Chairman: Brad Conner of Citizens Bank. Brad serves as vice chairman of consumer banking at Citizens, and his banking experience spans a host of portfolios, including wealth, home lending, retail and business banking, and auto and education finance. We were proud to welcome him to our Board in 2011 and we are even prouder to have him as our chair for 2018.

ICYMI — American Banker did an excellent story on Brad's chairmanship after he ascended to CBA Board Chairman.

Ed Dwyer — CBA has engaged Ed Dwyer, an accomplished banker with three decades of experience, as a consultant.  Many of you likely know Ed from his active involvement as chair of CBA's Risk Committee, when he was Chief Risk Officer for U.S. Bank's Community Banking and Branch Delivery. We look forward to drawing on his vast experience.