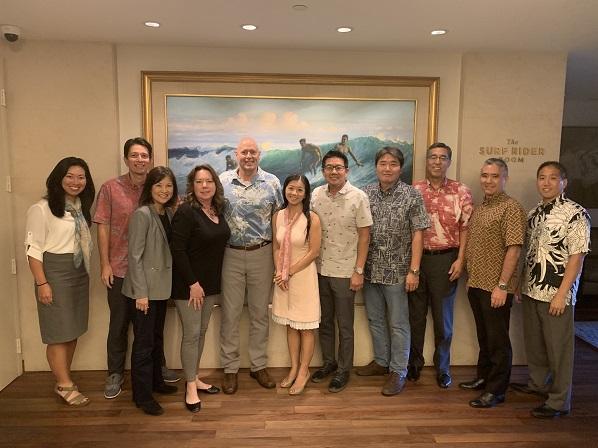 This week I visited great CBA member Bank of Hawaii in Honolulu, HI where I met with President & CEO Peter Ho, a number of Managing Committee Members in addition to CBA Standing Committee Members. It was a great opportunity to hear first-hand their successes and challenges, and discuss hot button issues in the retail banking industry from how other CBA members are handling the Government Shutdown to the Bank Secrecy Act (BSA).

It was also great to explore their new branch design in the lobby of their Headquarters, which is their busiest location. The project, led by CBA Mid-Tier Retail Executive Forum member Kevin Sakamoto was influenced in part by a visit he made to CBA member Frost Bank in Dallas in 2017. We always love when CBA Members openly share best practices; not only during our committee meetings but also outside CBA events.

The CBA Team looks forward to continued work with Bank of Hawaii.

CBA’s thoughts and prayers are with our friends at SunTrust, the Sebring branch community and all impacted by this tragedy. Four of the five victims were employees of the bank and the fifth was a customer.

Cajun Thoughts: SHUTDOWN Majority Leader Mitch McConnell, Vice President Mike Pence and Sen. Chuck Schumer could hammer out a deal but President Trump and Speaker Pelosi are not budging, so both sides are dug in. This is uncommon at the start of the year when both sides usually try to start on a more congenial foot. Second missed paychecks – and mortgage payments – are around the corner. Thanks for all you are doing to help furloughed federal employees … GAMING TRENDS Fortnite is a bigger rival for Netflix than HBO! I guess my nephews are not the only Fortnite fanatics. Gaming trends like Pokémon Go and fidget spinners come and go, but I predict Fortnite will stick around for at least a few more years …SOCIALISTS ON SOCIAL MEDIA Rep. Alexandria Ocasio-Cortez has a very strong social following with 2.56 million followers in comparison to Chairwoman Maxine Waters with just 952,000 followers. It will be interesting to see how members in the future will be designated by number of Twitter followers than the districts they represent … BIG BANKS TO TESTIFYSources close to Chairwoman Waters say she plans to have CEOs from six top banks testify before the House Financial Services Committee in March or April. The hearing is expected to include chief executives of JPMorgan Chase, Citigroup, Bank of America, Goldman Sachs, Morgan Stanley and Wells Fargo …  BRANCH VS. MOBILE APP As stated by Bank of America CEO Brian Moynihan, anything you can do at a branch, you can also do in an app. Hear more from Mr. Moynihan at CBA LIVE 2019.

CBA LIVE is filling up fast. If you are interested in attending, don’t wait!

CBA Requests SBA Loan Programs: CBA on Tuesday wrote Congressional leaders andPresident Trump requesting “all options be explored to reopen” the SBA’s 7(a) and 504 loan programs and “ensure workarounds do not affect borrowers’ future SBA loan eligibility due to the ‘credit elsewhere’ test.”

The letter notes small businesses were among the first to feel the effects of the shutdown due to the SBA’s inability to process and guarantee loans. Many banks expedited loan applications in advance of the Dec. 22, 2018, shutdown but since then have not been able to make loans to small business owners.

The issue has been a topic of discussion with CBA’s Small Business Banking Committee and several committee members expressed concern that offering short-term bridge loans could potentially making borrowers ineligible for SBA loans when the government reopens.

State of Play: House Democrats Wednesday passed a full-year spending bill by a vote of 234-180 to provide funding through the remainder of the fiscal year for eight of the shuttered departments, but not for the Department of Homeland Security (DHS). Congressional leaders and President Trump have still not reached a border security compromise.

The U.S. Senate voted yesterday on two separate bills to end the more than one month-long impasse: one proposed by President Trump including $5.7 billion for border wall funding as well as temporary relief for DACA recipients and the Democratic continuing resolution (CR) short-term spending bill that excludes border wall funding and would reopen the government until Feb. 8.

Both pieces of legislation failed.

On the other hand, Commerce Secretary Wilbur Ross claims the shutdown should not be “too damaging” to the U.S. economic growth potential. He noted even if the 800,000 furloughed workers never got their pay, which is not the case, it is still only about “a third of a percent” on GDP and so it would not be largely detrimental.

CBA Writes FDIC on Small-Dollar Lending: A lot of attention has been rightfully given to the hardships furloughed federal employees are facing and banks have stepped up to the plate. But, for millions of Americans, the need for short-term assistance to meet emergency expenses existed before the shutdown and will exist after the government reopens. Instead of turning to less regulated, more costly lenders, families should be able to rely on their bank for assistance.

CBA this week submitted comments to the FDIC commending the agency for examining the small-dollar marketplace and requesting they rescind its 2013 guidance. The guidance, along with now-rescinded guidance from the OCC and a 2017 rule from the CFPB which is currently under review, seriously curtailed small-dollar bank lending and forced Americans in need of emergency funds to pawn shops, payday lenders and other less regulated sources of cash.

Banks stand ready to help, just like they help customers facing hardships every day, but existing rules and guidance from federal regulators is standing in the way.

CBA urged all the Federal banking regulators to work together to issue rules that:

Rep. Beatty to Lead Diversity & Inclusion Subcommittee: House Democrats Thursday finalized the Financial Services subcommittee leaders roster. Rep. Joyce Beatty (D-OH) will chair the new subcommittee dedicated to diversity and inclusion. The financial services industry is committed to maintaining a diverse and inclusive workplace. Much progress has been made in recent years as banks continue to mirror the diversity of their customers in their employees. The creation of the subcommittee presents an opportunity to strengthen the industry’s overall approach to diversity and financial inclusion.

U.S. Bank Named World’s Most Admired Company: For the ninth consecutive year,FORTUNE magazine named U.S. Bank the world’s most admired superregional bank as part of the 2019 World’s Most Admired Company listing. Among superregional banks, U.S. Bank was ranked No. 1 in eight of the nine key attributes of reputation: Quality of Management, Community Responsibility, Innovation, Quality of Products/Services, People Management, Use of Corporate Assets, Financial Soundness and Long-Term Investment Value. U.S. Bank was also ranked in the top 10 for Community Responsibility (No. 8) and Financial Soundness (No. 9).

CEOs Voice Economic Concerns: New survey results from PwC’s annual global CEO survey reveal corporate leaders are growing increasingly concerned about the state of the nation’s economy. The survey uncovered a 41 percent decrease in belief that the U.S. is the top market for growth along with a drop in North America’s CEOs’ optimism from 63 percent to 37 percent.

Cathy Nash Leaves Woodforest: The CBA Team is deeply saddened to learn President & CEO Cathy Nash of Woodforest National Bank has stepped down. Cathy was an extremely valuable, dedicated, long-time member of the CBA Board of Directors. Cathy led Woodforest’s push into big-ticket and middle-market commercial lending last year as part of its shift from a model focused on in-store branches and consumer fees. We will miss her and wish her all the best!

Our State of the Week is HAWAII, where more than 1 out of every 4 residents banks with a CBA member! CBA members in Hawaii hold $33 Billion in total assets, employ 6,000 people, provide $1 Billion in small business loans and serve 600,000 customers. Hawaii is also home to CBA member Bank of Hawaii, which I visited this week. Check out our state by state numbers here.