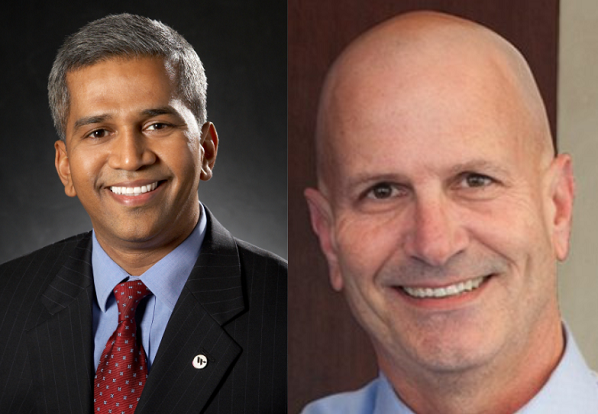 John Pataky of TIAA Bank (Right) will succeed Nitin Mhatre of Webster Bank (Left) as Chair of CBA's Mid-Tier Retail Executive Forum as Nitin begins his tenure as CBA Board Chair this Fall.

CBA Mid-Tier Retail Executives Meet in D.C.: CBA hosted our Mid-Tier Heads of Retail this week for an in-person meeting!

Incoming CBA Board Chairman Nitin Mhatre of Webster Bank kicked off the meeting with a business discussion surrounding digital innovation, privacy, CRA and growing deposits. Other discussion topics throughout the meeting ranged from BSA/AML, faster payments/Zelle and fraud trends to CBA’s key issues like the need for a bipartisan commission at the CFPB and small-dollar lending.

**MARK YOUR CALENDAR: CBA will host a Mid-Year Legislative and Regulatory Update membership call on Wednesday, July 31st at 2 PM ahead of the August Congressional recess**

Cajun Thoughts: DUDE, WHERE'S MY HEARING? Chairman Mike Crapo thinks a hearing on marijuana banking should happen - and happen soon. His comments come after the House Financial Services Committee passed the Secure and Fair Enforcement (SAFE) Banking Act in March, and at that time there was no path forward for such legislation in the Senate. While there is bipartisan support, Crapo along with other Members have been hesitant to support the Senate's version of the bill since it has potential to conflict with the federal law ban on the sale of marijuana, even where recreational marijuana is permitted. Sources say the Senate could hold a hearing as early as Monday, July 22 ...  FED CHAIRMAN POWELL VS. FACEBOOK’S LIBRAFed Chairman Jerome Powell testified before Congress this week and said Facebook’s plan to implement cryptocurrency Libra raises serious concerns and “cannot go forward” until those concerns are resolved. Chairman Powell emphasized troubling issues including privacy, money laundering, consumer protection and most importantly a financial stability concern due to Facebook’s large user-base of more than two billion people. Libra leaders and Facebook officials are set to testify in back-to-back House Financial Services and Senate Banking Committee hearings next week … MIDYEAR BANK M&A SNAPSHOT Did the BB&T-SunTrust deal spark a cycle of bank consolidation? Not yet. Recent research reported by American Banker revealed bank consolidation activity is down, with 114 bank deals announced so far this year compared to 129 at this time in 2018. Excluding the BB&T-SunTrust merger, overall value has decreased by $4 Billion and the average price to tangible book value fell to 168% from 176% in 2018. Yes, bank M&A has potential to gain momentum in the second half of 2019, but numbers have very much weakened so far. Stay tuned … MUST-LISTEN PODCAST In a recent podcast, Pure Point Financial President and CBA Board Member Pierre Habis discusses how the bank is bringing the digital world and digital benefits to the physical space. Customers want choices, and MUFG is working toward providing more at its physical locations in Florida, New York, Illinois and Texas ... BACK IN THE USA When the name Vernon Hill is mentioned, veterans of the banking industry usually have an immediate reaction. Well, Vernon is back in the USA at Republic Bank opening branches in the NYC area. Can he be successful in a post Dodd-Frank, heavily digital era? ... SUMMER READS Just Completed: Confirmation Bias & 31 Days: Gerald Ford, the Nixon Pardon and A Government in Crisis. Next Up: Luckiest Man: The Life and Death of Lou Gehrig.

CBA Comments on HFSC Credit Reporting Bills: The House Financial Services Committee convened yesterday for a markup focused on bills that would make significant changes to credit reporting and underwriting systems banks utilize. Ahead of the markup, CBA sent a letter to Chairwoman Maxine Waters and Ranking Member Patrick McHenry expressing concern the bills will have unintended effects on the availability of consumer credit.

A copy of CBA’s letter outlining our concern is available here.

Fed Vice Chair Quarles Addresses Financial Stability: CBA attended a Bipartisan Policy Center event this week where Federal Reserve Vice Chair Randy Quarles addressed financial stability and supervision. Vice Chair Quarles focused on using the “right tools for the right purpose”. In particular, he elaborated on the use of the macro prudential tool, the counter cyclical capital buffer. This tool is used to increase capital requirements on banks at the height of a business cycle to provide a “cushion” during a downturn for banks to continue to lend to households and businesses.

Regarding supervision, Vice Chair Quarles echoed his comments from last week’s conference on stress testing at the Federal Reserve Bank of Boston, the Federal Reserve does not seek to fail banks, but rather the Fed wants the stress tested banks to learn. Risk management is about learning, and the potential risk do not neatly fit into a quantitative model.

In response to a question from the audience, Vice Chair Quarles addressed Facebook’s announcement of the stable coin cryptocurrency, Libra. In his role as Vice Chair of Supervision,Quarles serves on the Financial Stability Board, an international body that makes recommendations about financial stability. Vice Chair Quarles commented that prior toFacebook’s announcement crypto assets were not significant enough to present a risk to financial stability. Although, he acknowledged crypto currency could still present risk to consumer protection and anti-money laundering efforts. However, Libra is a stable coin with access to Facebook’s global platform, the Financial Stability Board Will now being to look more closely at stable coins to determine next steps.

FDIC Releases Initial Sections of its Applications Procedures Manual: The FDIC released the first sections of its Applications Procedures Manual designed to provide guidance to staff during the internal application process. Each subsequent release will feature multiple sections governing specific filing types. While this is not guidance for bank compliance, the increased transparency of a process that has historically been viewed as secretive and difficult to navigate demonstrates Chairman Jelena McWilliams standing true to her commitment to transparency.

Federal Bank Agencies Simplify Regulatory Capital Rules:  The Federal Reserve, FDIC and the OCC today issued a final rule to reduce regulatory burden by simplifying several requirements in the agencies' regulatory capital rules. The changes in the final rule only apply to banking organizations that do not use the "advanced approaches" capital framework (non-advanced approaches banking organizations), which are generally firms with less than $250 billion in total consolidated assets and less than $10 billion in total foreign exposure.

The final rule will be effective as of April 1, 2020, for the amendments to simplify capital rules, and as of October 1, 2019, for revisions to the pre-approval requirements for the redemption of common stock and other technical amendments, with an option for early adoption.

Fed Releases Monetary Policy Report: The Federal Reserve released its semiannual monetary report to Congress. The Fed noted, "economic activity increased at a solid pace in the early part of 2019, and the labor market has continued to strengthen."

The Fed added, "all told, incoming data for the second quarter suggest a moderation in GDP growth — despite a pickup in consumption," and continued trade tensions brought, "higher uncertainty" which "may lead businesses to delay investment purchases as they wait for the policy uncertainties to be resolved. Nevertheless, the economic expansion continues to be abetted by steady job gains, increases in household wealth, expansionary fiscal policy, and still-supportive domestic financial conditions."

The report also found inflation was running below the Federal Open Market Committee's 2% objective and at its June meeting believed current economic conditions warranted maintaining federal fund rates at 2.25% to 2.5%. The FOMC will, "closely monitor the implications of incoming information for the economic outlook and will act as appropriate to sustain the expansion, with a strong labor market and inflation near the Committee's symmetric 2 percent objective.

A copy of the full report is available here.

Michael Roberts Named President of HSBC USA: After more than 30 years with Citigroup, Michael Roberts will succeed HSBC USA’s President and Chief Executive Patrick Burke, who is set to retire. Roberts led Citi in several areas throughout his tenure with the bank including serving as Chief Lending Officer. Congratulations on your new role!

SunTrust Ends Financing for Private Prisons: SunTrust is the fourth bank to severe ties with private prisons and no longer finance them amid political scrutiny from Congress. Bank officials said the decision was made “after extensive consideration of the views of our stakeholders on this deeply complex issue.” JPMorgan Chase, Bank of America and Wells Fargo have also stopped financing companies that manage private prisons and immigration holding facilities.

Citi Offering Perks to Checking Account Customers: Citigroup is now offering Amazon Prime and Hulu subscriptions to new customers who open checking accounts, part of a growing trend to attract younger consumers. According to J.D. Power, 4% of all consumers switched banks last year, but the number was 9% for consumers under 40.

CBA CRC Chair Sue Whitson, BMO Harris to Retire: After many years on CBA’s Community Reinvestment Committee and nearly three decades at BMO Harris Bank, our esteemed chairSue Whitson will be retiring at the end of 2019. Sue has been an integral part of the team, helping the Committee work through many tough issues and taking on a leadership role at a critical time in CRA history. She has shown her leadership through her extensive knowledge, diplomacy and good sense, and her strong commitment to the values of CRA that we all share. We will miss you – Congratulations!

CBA’s State of the Week is ALASKA, where more than a quarter of the Last Frontier residents bank with a CBA member! CBA members in Alaska hold $12 Billion in total assets, employ4,000 people, provide $300 Million in small business loans and serve 300,000 customers. Check out our state by state numbers here!