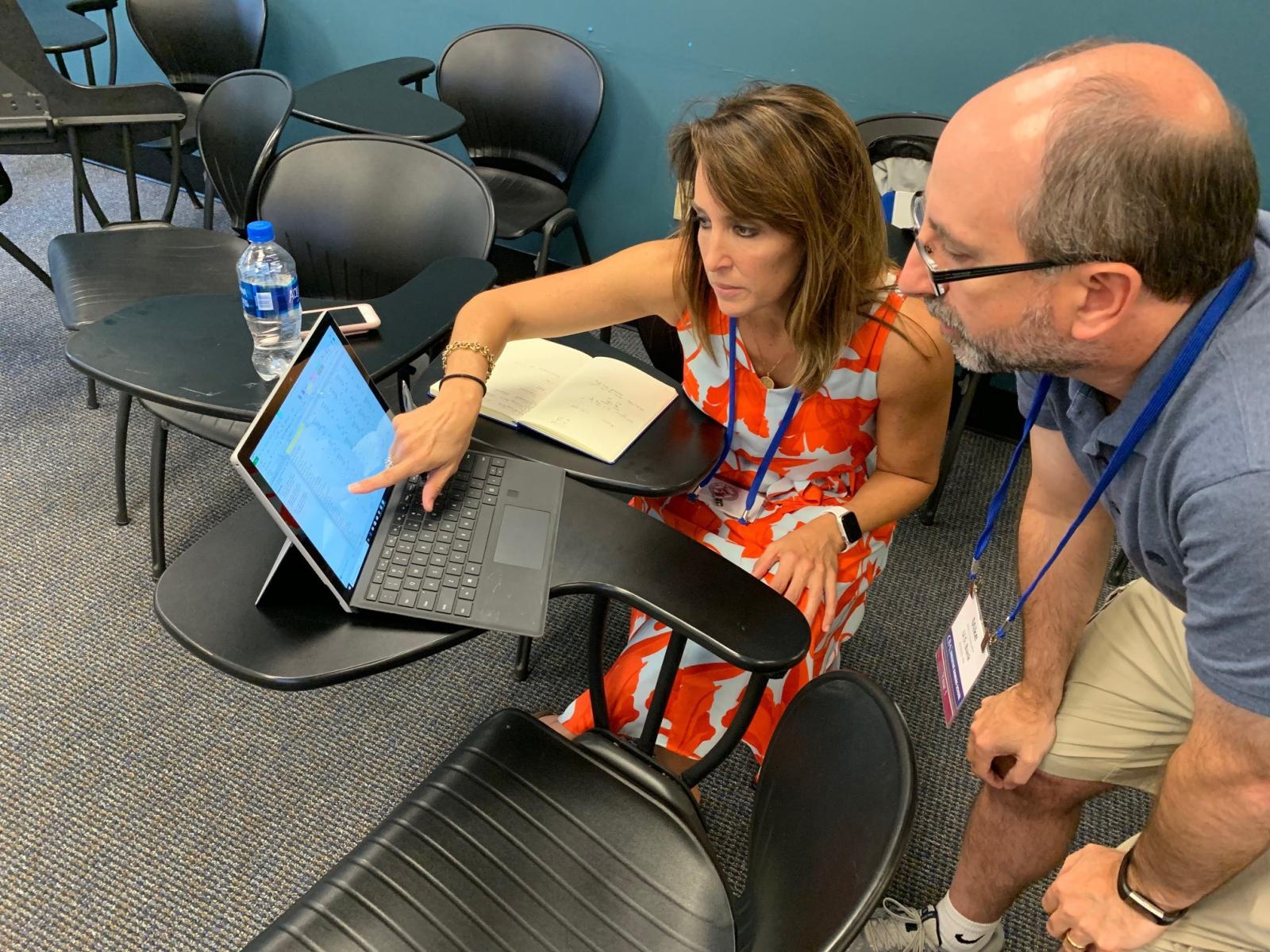 Decision time! Year 1 students Ilaria Rawlins with First Financial Bank and Mike Grundhoefer with U.S. Bank at CBA Executive Banking School tackle our one-of-a-kind simulation: MarketSim, where a small team is challenged to run the entire consumer business. In order to do so, students must analyze the current status of the retail bank and formulate a strategy to attract market share.

Learn more about our integrated curriculum here and don’t miss the livestream of graduation next week, which will be available to view here.

Cajun Thoughts: YOU WON’T WANT TO MISS THIS! This week I have been at CBA’s 68th Executive Banking School session, which kicked off over the weekend at Furman University in Greenville, S.C., where “students” are going through decision-making simulations. Join us on Tuesday, July 30, beginning at 9:30 AM ET to watch the CBA Executive Banking School’s Class of 2019 graduation ceremony. During the ceremony, CBA will recognize EBS honors graduates and announce the 2019 Tem Wooldridge Award recipient. Also, mark your calendar for CBA’s annual mid-year membership call featuring a legislative and regulatory update from the CBA Team on Wednesday, July 31 at 2:00 PM. There will be an opportunity for Q&A following the overview … BB&T-SUNTRUST HEARING While some HFSC Democrats expressed concern with the BB&T-SunTrust merger, the two banks are surely following every law, regulation and process required to merge. BB&T CEO Kelly King and SunTrust CEO Bill Rogers stated their case and relayed the same message throughout the hearing: This is a merger of equals and will allow them to better serve their customers and communities. One line that struck me by Bill Rogers: “Bigger doesn’t mean riskier…We are adding scale, not complexity.” A brief summary of the hearing prepared by the CBA Team is available here …  WESBANCO TO MERGE WITH OLD LINE CBA member WesBanco announced a merger plan with Maryland-based Old Line Bancshares in a $500 million deal. The merger is expected to close in two to three quarters, and we are excited to welcome WesBanco’s expansion into Washington, D.C., metro area markets! ... BANKING ON E. WARREN 2020? The next Democratic Presidential Primary Debate will take place Tuesday, July 30 and Wednesday, July 31. While the last debate largely stayed away from banking issues, Sen. Elizabeth Warren has published two recent op-eds on Medium outlining her plans for banking / Wall Street regulations and the economy. The plans did not contain much new information but will likely bring the industry back into the debates. Team CBA will watch and respond as necessary … CONGRATULATIONS TIM WENNES Santander Bank named former CBA Board Chairman and longtime MUFG Union Bank executive Tim Wennes as the new President & CEO, to take effect September 16, 2019. Congratulations – the CBA Team is very excited for you!

CFPB Releases ANPR on Qualified Mortgage: The CFPB released an Advanced Notice of Proposed Rulemaking (ANPR) this week seeking information regarding the expiration of the temporary Government Sponsored Enterprises (GSEs) provision in the Bureau’s Ability to Replay/Qualified Mortgage Rule (QM/ATR). The Bureau states they plan to allow the GSE patch to expire either on or shortly after the January 10, 2021, expiration date and seeks comments on how to facilitate a smooth and orderly transition from the patch.

The ANPR solicits comments on possible amendments to the ATR/QM rule and invites commentary on whether Regulation Z’s definition of a qualified mortgage should be revised after the GSE patch expiration. The ANPR seeks information and comment on whether the definition of qualified mortgage should retain a direct measure of a consumer’s personal finances (for example, debt-to-income ratio), and whether the definition should include an alternative method for assessing financial capacity.

Dodd-Frank amends the Truth in Lending Act (TILA) to establish ability-to-repay requirements for most residential mortgage loans, and TILA further identifies factors a creditor must consider in making a reasonable assessment of a consumer’s ability to repay. TILA also defines a category of loans called qualified mortgages for which creditors may presume compliance with the ability to repay requirements. The GSE patch expanded the definition of a qualified mortgage to include certain mortgage loans eligible for purchase or guarantee by government sponsored agencies, and often granted a safe harbor from legal liability in connection with ability to repay requirements. The temporary patch allows for government sponsored entity loans to qualify for the safe harbor even if their debt-to-income ratio exceeds 43%.

“Loans backed by Fannie Mae and Freddie Mac make up a large portion of the U.S. mortgage market,” said CFPB Director Kathleen L. Kraninger. “The national mortgage market readjusting away from the Patch can facilitate a more transparent, level playing field that ultimately benefits consumers through stronger consumer protection. We want to hear all perspectives on how to move beyond the GSE Patch, the impact on credit, the role of the private mortgage market, and possible modifications to the definition of qualified mortgages and the rules governing the documentation of debt and income. The Bureau is committed to ensuring a smooth and orderly mortgage market throughout its consideration of these issues and any resulting transition away from the GSE Patch.”

Comments on the Bureau’s ANPR are due 45 days after its publication in the federal register.

CBA stands with the FCC in combatting fraudulent and illegal robocalls and supports implementation of the SHAKEN/STIR framework to better protect consumers. However, legitimate calls from financial institutions should not be inadvertently looped into this call blocking regime, as doing so will leave American consumers financially vulnerable.

CBA recommends the FCC establish clear and objective guidelines on what constitutes an “unwanted” call that takes into consideration the fraudulent and illegal nature of many robocalls and does not target legitimate and necessary calls made by CBA members. Further, CBA recommends expansion of the “Critical Calls List”, which prohibits voice service providers from blocking calls made from numbers such as emergency services, to include legitimate numbers used for fraud alerts and data breach notifications.

While the statement does not establish new requirements and was released to shed light on the regulators’ risk based approach to BSA/AML supervision, it does note the approach allows agencies “to allocate more resources to higher-risk areas and fewer resources to lower-risk areas when conducting BSA/AML examinations.”

The full statement is available here.

CBA member banks are committed to working with regulators and law enforcement to deter financial crimes and commit significant resources toward that end. We support the working group’s efforts to collaborate across agencies to improve current BSA/AML regulations, and encourage the group to focus its efforts on those aspects of the current BSA/AML regulations and supervisory approach that are most burdensome and most outdated.

We will also continue working with Congress on BSA/AML modernization efforts requiring Congressional action. One such example would be a centralized database of beneficial ownership information collected and verified by a government agency, which would help banks streamline the collection and reporting process and prevent potential bad actors from accessing the financial system.”

Student Lending in the News: Legislation introduced by Sen. Elizabeth Warren (D-Mass.)and Rep. Jim Clyburn (D-S.C.) forgiving student loan debt, like all other similar plans, fails to make college more affordable for future generations. This proposal does nothing to decrease the cost of college and does not help future students. It is short-term, short-sighted and comes up short in every way except its cost to taxpayers.

Also this week, The JPMorgan Chase Institute released new research exploring how student loan payments impact American families. Over the last two decades the price of college has increased nearly 200 percent and the amount of student loan debt held by Americans has gone up with it – from just over $600 billion in 2008 to nearly $1.5 trillion today. About 92 percent of that debt is from the federal government. These federal loans have a double-digit delinquency and default rate and lack plain-language disclosures on the total costs of the loan. Private student loans from banks, on the other hand, have a 98 percent repayment rate, offer clear disclosures at the start of the loan process and set borrowers up for success.

We believe there is a role for the federal government and private banks to play in helping students and their families responsibly finance higher education. Federal lending programs, however, need some common-sense reforms to constrain skyrocketing college tuition and help students better understand the amount of federal debt they are responsible for repaying.

Fifth Third Rolls Out “Banking to Go”: At the 110th NAACP National Convention in Detroit this week, Fifth Third Bank introduced its mobile kiosk “Banking to Go.” As part of the bank’s $32 billion community commitment, the resource is designed to increase accessibility to bank products and services for low-to-moderate income consumers.

Bank of America Expands into Ohio: For the first time, Bank of America is expanding into Ohio with intent to open 30 branches over the next two years. The expansion is underway with the opening of a branch in Cincinnati on Monday, where 15 total branches will live.

ICYMI: The Hill newspaper profiled CBA’s growth, influence and role in strengthening the industry’s reputation – all testaments to the entire CBA Team, Board, Committees and Members. The full article is available here!

Doug talks about the implications of proposals by Democratic Presidential Candidates forgiving all – or nearly all – student debt. As AAF notes, “Eliminating student debt does not truly reduce the cost of college, he argues. Further, singling out student debt for forgiveness raises the question of why the federal government is forgiving this kind of debt and not others.”

Spirit of Texas Bancshares and Chandler Bancorp to Merge

CBA’s State of the Week is WISCONSIN, home to Associated Bank, where more than a quarter of Cheese State residents bank with a CBA member! CBA members in Wisconsin hold $105 Billion in total assets, employ 23,000 people, provide $2.4 Billion in small business loans and serve 1.5 Million customers. Check out our state by state numbers here.