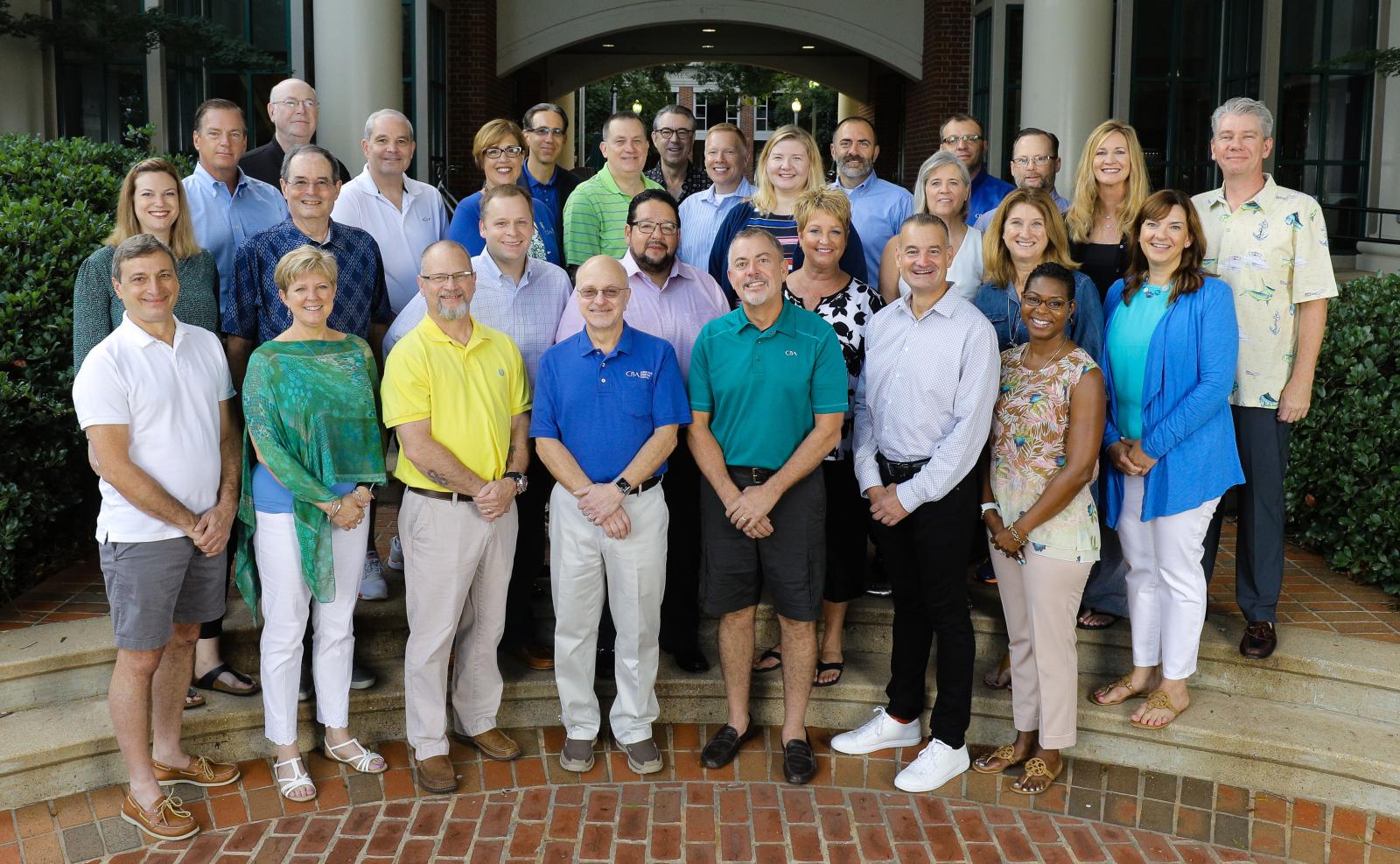 Great Start at CBA Banking School! - Like I said last week, CBA Executive Banking School is a highlight of my year. The energy the students (more than 300 in total with a bumper crop of 137 freshman) and faculty bring is inspiring. I always leave more optimistic than ever about the future of retail banking. EBS, which kicked off on Sunday at Furman University in Greenville, S.C., is still going strong after more than six decades because of the first-hand knowledge and tools our faculty can pass along to your bank’s future leaders.

In addition to our guest speakers, we were thrilled to have about three dozen bank executives in town for our annual Bank Dinner Night. Special thanks to our star guests CBA Chair Brad Conner with Citizens, Chair Elect Todd Barnhart with PNC and Past Chair Ross Carey with U.S. Bank; CBA Board Members Michael Cleary with Santander, Will Howle with Citi, Ellen Koebler with SunTrust, and Bob Kottler with Iberia; and, USAA President Chad Borton as well as Head of Consumer Lending Mary Mack and CBA Education Council Chair Michelle Lee both with Wells Fargo and Vice Chairman of Community Banking and Branch Delivery John Elmore and Tim Welsh, Vice Chairman, Consumer Banking Sales and Support, both of U.S. Bank.

Graduation is this Tuesday and you can follow all the action on Twitter with the hashtag #ExecutiveBankingSchool. Special thanks to the 2018 CBA Executive Banking School Faculty for a remarkable week.  Classes are in full swing at Furman University in Greenville, S.C.

With Bureau RFIs Over, Enforcement Picking Up - The Bureau of Consumer Financial Protection has spent the first half of the year managing its requests for information process and you can view our responses here. But, as that process came to a close, the Bureau has stepped up the pace on its enforcement efforts. After issuing just one enforcement action in the first seven months after Mick Mulvaney became acting director, the Bureau has averaged roughly one action a week since mid-June. The Bureau was involved in 50 lawsuits and investigations when Acting Director Mulvaney took over last year and many are still active. CBA will continue monitoring the Bureau’s work and keep members informed of any actions impacting the industry.

Aim Higher Likely Equals Higher Tuition & Debt - Democrats in the House of Representatives have unveiled an outline of their version of a Higher Education Act reauthorization, calling it Aim Higher.

The plan calls for increasing Pell Grants, something CBA has endorsed, but it also continues virtually unlimited PLUS loan lending by the government, which increases tuitions and student debt. Instead, the federal government should encourage those who qualify to utilize the private market for education funding, freeing up federal funds to help those most in need.

Student lending is an important topic for CBA and you can read more about our proposals to help students achieve their education goals here.

Synovus Back in the Acquisition Game - CBA member Synovus Financial will pay $2.9 billion for the $11 billion-asset FCB Financial Holdings, owner of Florida Community Bank. “Strategically, it’s right in the sweet spot,” Kessel Stelling, Synovus' chairman and CEO said of the merger. When announcing the deal, Synovus said the combination of FCB with Synovus will create the largest mid-cap bank in the Southeast by deposits and will elevate the company’s growth profile through a deepened presence in high-growth Florida markets. The merged institutions will operate under the Synovus brand.

Bank of Hawaii’s Consumer Lending Surge - Good news from the Aloha State! Bank of Hawaii, another CBA member, reported their consumer lending has increased more than 20% in the second-quarter compared to last year. The growth earned nearly $55 million and earnings per share totaled $1.30. Peter Ho, the President and CEO, at Bank of Hawaii said, “Loans continued to grow, our margin expanded, asset quality remains strong.”

Financing Your Dream - CBA members currently hold about 75% of all U.S. consumer banking assets; employ 1.7 million people; extend $4 trillion in consumer loans; provide $275 billion in small business loans; and, serve 140 million consumers in all 50 states. I am excited about growing the footprint as you work with your customers, families and small businesses to finance their dreams!

Flower Power at Rabobank - When it comes to complying with new European, California and New York privacy and cybersecurity laws, Rabobank is doing it in a unique way. The bank is converting customer data into Latin, using flower and animal names to identify customers. Why this novel approach? Rabobank executives said they needed a system with enough names to cover all 8 million of their customers yet something so unique, it was clear the data fields were not real names. Perhaps my Rabo account name could be Alligatoridae Mississippiensis?

Whatever the method, it is just another way CBA member banks are getting creative when it comes to protecting customers.

Deposit & Payments Committee Takes on Music City - The Deposits and Payments Committee met in Nashville, Tenn., this week. The group was graciously hosted by Mark Erhardt of Fifth Third Bank. CBA Premier Sponsor VISA provided a valuable update on payment trends and the committee had a robust conversation on deposit and business issues – noting deposit account growth rates continue to climb, in both consumer and small business – as well as a discussion on fraud. Members reported synthetic fraud is quickly on the rise while traditional forms of card fraud have fallen due to improved security measures. And, everyone’s favorite subject, the group began discussion on CBA LIVE 2019!!!!

Tom Brown Highlights - This could go under EBS, but I wanted to include Tom Brown’s lecture here because he hit on so many industry trends.

He went through about 100 data-packed slides and answered about that many questions during his hour-long presentation. Here are some key takeaways:

Paul has worked closely with CBA to develop the EBS curriculum as well as our BankCom simulation. Paul is a originally from Canada but has recently moved to Florida and has his citizenship interview a few weeks after returning home from EBS.

John Owen Named Regions COO - Not sure if I should congratulate John Owen or Regions, so I will congratulate John on being promoted to Regions’ Chief Operating Officer and Regions for having such a great COO! John was a recent CBA Board Member and I think Regions summed him up in their Tweet announcing the promotion: “A strong leader. A clear vision. A commitment to #CustomerService.”

Lunch with United Community Banks’ Lynn Harton - I used my time in Greenville at EBS as an opportunity to grab lunch with Lynn Harton, the CEO of United Community Banks, Inc. We had a great conversation and I want to thank him again for lunch, his time and the chance to visit the historic Poinsett Club (where I had hamburger steak topped with mashed potatoes and gravy). Trifecta of a day!

Great Visit with Equifax - I was in Atlanta earlier this week to talk to Scott Collins and Tom Jolly with CBA Premier Sponsor Equifax. It is was an enlightening conversation on consumer credit trends.

Committee Chairs Call -We had our monthly committee chairs call this week and went around the horn for everyone to give an update on the latest from their committees. Our committees are the backbone of CBA and really do set us apart from every other trade association in town. The chairs and vice chairs are vital in spotting industry trends, helping form CBA’s priorities and setting a topical agenda not only for their committee’s monthly meetings but also CBA LIVE. I know it is hard to believe CBA LIVE planning is already underway, but the advanced prep ensures CBA LIVE remains the must-attend event for retail banking leaders. I cannot wait to see the speakers and programing they have in store for LIVE attendees. You will not want to miss it, so mark your calendars now: CBA LIVE 2019, April 1-3, 2019, Washington, D.C.