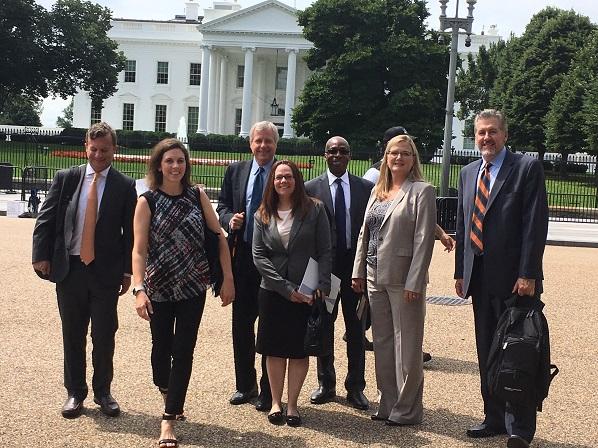 Get up to speed on CBA’s recommendations to help ensure the federal government responsibly serves those most in need here.

Cajun Thoughts: MOYNIHAN: MOST B OF A DEPOSITS ARE BRANCHLESS CEO and Chairman Brian Moynihan was quoted this week saying Bank of America has cut costs by adding technology including its virtual assistant Erica, and 75% of its deposits are not made at branches … FACEBOOK LAUNCHES LIBRA Call me skeptical. As I’m sure you all heard, this week Facebook released its much-anticipated proposed cryptocurrency called Libra. The Senate Banking Committee has already scheduled a hearing for July 17, 2019 to discuss the digital currency and data privacy concerns. The manager of Facebook’s blockchain efforts, David Marcus, is expected to testify, but the witness list has not been announced. For American consumers, there is STILL no safer place than the well-regulated, insured and capitalized banking system …  CBA LIVE 2020 The week was off to a busy and productive start at CBA – We held our first planning meeting on Monday for CBA LIVE 2020! Mark your calendars and get your flip flops ready for March 23-25, 2020 in San Diego! Check out highlights from CBA LIVE 2019 here and learn more about our retail banking’s premier event here.

HFSC Holds Hearing on Diversity in the Boardroom: The House Financial Services Committee held a hearing yesterday focused on options for diversifying the gender, racial and ethnic composition of corporate and federal boards, and also examined legislative proposals that seek to address board diversity.

CBA Writes Senate Banking Committee, AML/CFT Framework: In advance of the Senate Banking Committee’s hearing on the collection of beneficial ownership information, CBA sent a letter to Chairman Mike Crapo (R-Idaho) and Ranking Member Sherrod Brown (D-Ohio)encouraging consideration of proposals to end the use of anonymous shell companies engaged in illegal activities with the purpose of undermining our financial infrastructure.

CBA stands ready to work with the Committee to pass legislation that will bring meaningful reforms to the AML/countering the financing of terrorism (CFT) framework and allow for the collection of beneficial ownership legislation at FinCEN. Modernization should shift the collection of beneficial ownership information from banks to FinCEN and provide law enforcement with more tools to pursue bad actors. FinCEN is appropriately suited to perform these duties as its purpose is to safeguard the financial system, combat money laundering, and collect, analyze and disseminate financial intelligence.

CFPB Settles with For-Profit College, $168M in Student Loans Erased: The lender for now-closed for-profit college ITT Tech reached a settlement with the CFPB agreeing to forgive $168 million in student loans to more than 18,000 who attended the college. The Bureau accused the lender, Student CU Connect CUDO LLC, of making loans to students who did not fully understand the terms and to some who could not afford to pay them back. Get up to speed with CBA’s recommendations to help ensure the federal government responsibly serves those most in need here.

Bank of America Offers Digital Assistance to Charlotte Home Buyers: This week Bank of America announced it will provide grants that do not have to be repaid by the homebuyer in an effort to assist with down payment and closing costs in the Charlotte, N.C. area. The bank has set aside nearly $5 billion nationwide for the program. More here.

Discover Drops Fees for Checking, Savings Accounts: Discover recently decided to waive fees for its checking and savings accounts including those for insufficient funds, replacement debit cards and stop-payment requests. Bank officials said the move is a reaction to how customers view fees, and Discover is the first big bank to offer the free services. More here.

HSBC Partners with Roostify, Digital Mortgage Solution: HSBC Bank USA partnered withRoostify, a fintech which is already in business with other banks, to produce a new digital mortgage platform. Bank officials said the new platform will be easier for consumers to use and will lead to more efficient approvals.

SunTrust, Other Employers Push for Rainy-Day Accounts: Companies such as SunTrust,Kroger and Levi Strauss are encouraging employees to set up accounts to set aside money for emergencies. "There is a growing recognition on the part of employers that people cannot save for retirement if they don't also save for emergencies and figure out a way to pay down debt," said Ida Rademacher of the Aspen Institute's Financial Security Program. Learn more here.

CBA’s State of the Week is WEST VIRGINIA, home to WesBanco and United Bank, where more than a third of Mountain State residents bank with a CBA member! CBA members in West Virginia hold $23 Billion in total assets, employ 6,000 people, provide $600 Million in small business loans and serve 600,000 customers. Check out our state by state numbers here!