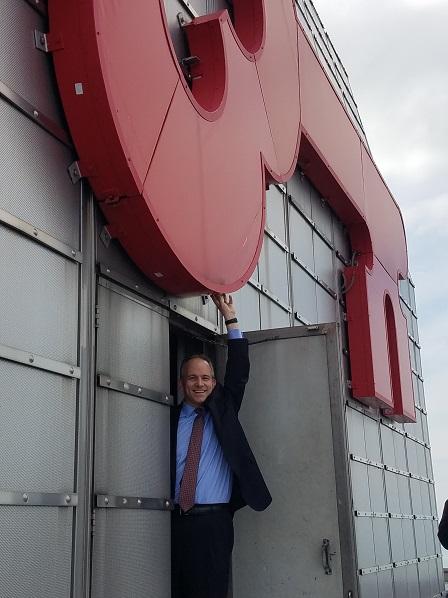 CBA General Programs
June 28, 2019
We have exciting news to share with you regarding the CBA Board of Directors!

CBA's Admin Committee of the Board, led by Board Chair Todd Barnhart of PNC, this week announced the recommendation of Dennis Devine with KeyBank (pictured above) to be CBA's Chair-Elect for Fiscal Year 2020.

CBA Announces Board News: After a vote by CBA’s Corporate Membership later this year, CBA Associate Membership Council Co-Chair Dennis Devine of KeyBank will officially become Chair-Elect and Nitin Mhatre of Webster Bank will become CBA Board Chairman at our September meeting. Thanks to Dennis’ leadership, CBA has more than 120 Associate Members, including 24 year-round sponsors. We are all grateful for Dennis’ innate ability to see the bigger picture and bring determination to the table.

When he is not assisting CBA, Dennis is the President of Consumer Banking at KeyBank where he leads Consumer, Business Banking, Wealth Management, and Home Lending lines of business nationally. He is also a member of KeyCorp’s Executive Council and Executive Leadership Team.

We are pleased to share one more announcement: Ryan Bailey with Bank of the West has agreed to serve as CBA's new Corporate Membership Council Chair. While Dennis and Ryan are taking on new roles, we are thrilled Michelle Lee with Wells Fargo will remain at the helm of CBA's Education Council and Mike Aust with Comerica will remain atop the Government Relations Council. Michelle and Mike's work has been invaluable to CBA.

Thank you to current Chairman Todd Barnhart of PNC for his dedication and tireless efforts in making CBA's centennial a great success! We look forward to the remainder of his term.

Cajun Thoughts: WHO REALLY WINS IN CLASS ACTION LAWSUITS? Arbitration is faster and more cost-effective for consumers than class actions suits, which turn huge profits for class action lawyers. So, when you hear people feigning outrage about arbitration clauses in financial contracts, as some have done recently, look at the facts and ask, “Who are these groups really looking out for? Trial lawyers or consumers?” Check out my op-ed featured in Morning Consult this week for more on the comparison between arbitration and class action lawsuits …COMPTROLLER OTTING SEES CRA POTENTIAL IN INTERN PROGRAM The first week of the OCC’s new High School Scholars Intern Program is complete! 81 minority students were welcomed to the inaugural class of the program, which was created to expand economic opportunity and improve financial literacy among young Americans. It’s great to see Comptroller Otting continue to encourage banks and other entities to begin similar programs and advocate for the value of this type of investment in CRA modernization, and the program also fulfills a section of the Dodd-Frank Act. Check out the Comptroller’s op-ed on the program and the effort at large here … SANDERS’ PLAN TO TAX WALL STREET, ERASE STUDENT DEBT Similar to Sen. Elizabeth Warren’s bill, but a bit more robust, Sen. Bernie Sanders is proposing a tax on Wall Street to eliminate $1.6 trillion in student loan debt. Student loan debt has more than doubled in the last decade and 92% of that debt is held by the federal government. Loan forgiveness or free college might make good campaign rhetoric, but these proposals are unlikely to become law. If Congress wants to help students and their families, they must start by addressing the skyrocketing cost of college which is fueled by virtually unlimited federal lending. In a first step, the Senate introduced a bipartisan bill yesterday to improve disclosures on federal student loans! CBA's letter of support is available here … BANKS ACE STRESS TESTS Lucky for our industry, stress test season is BORING! Our banks passed with flying colors! … FIRST DEMOCRATIC DEBATE In between watching the Atlanta Braves and the College World Series (Congrats Vandy), I watched a bit (OK, more than a bit) of the first Democratic debate for President. As we first witnessed at the Congressional hearing of Bank CEOs, None – not even anti-big bank Sen. Elizabeth Warren – trashed banks. Let the countdown begin to the 2020 election! One of my favorite lines, and one in which I have used many times, came from Minnesota Senator Amy Klobuchar regarding student lending when she said she does not support subsidizing college for kids from wealthy families. CBA has always felt our government should not be subsidizing rich people to attend college – only the most in need should receive limited federal resources. It is usually a statement both parties agree with.

Working and interacting with the CBA Team has always been a very rewarding experience for me as I eagerly walk into the office every day in D.C. On the flip side, however, it pains me when we have a departure. Erin Snyder has been at my side every day since I arrived, holding four different positions along the way, most recently she was the lead of our Associate Membership programs and CBA’s Deputy Chief of Staff. A graduate of Virginia Tech, CBA has been her only employer. Much to my surprise, and disappointment, Erin decided to spread her wings and fly, and more to Portland, Oregon, without a job, but full of curiosity and adventure. I am pretty sure I did not have the “courage” to seek an adventure at this level at her age. Erin was very much a part of the resurrection of our conference and committees, as well as creator of the year-round sponsorship program. She executed these events flawlessly and with an even keel. It was a joy to watch her flourish as a professional during VERY uncertain times. I definitely tried wholeheartedly to convince her to stay and work with us for a few more years (or many…) but she did depart with her very own CBA bobblehead!

Not surprisingly, Erin fully ensured the successful continuity of our Associate Members by promoting someone prepared and ready to step in. Maren Colon will assume the duties of the Associate Membership program and continue her work on corporate philanthropy as well as CRA. An almost 6-year veteran of CBA, she is very familiar with the entire CBA family.

Education Manager Jake Fowler, an almost 2-year CBA veteran, will assume the role of Associate Membership Manager, and Jaylan Reid joined the CBA Team this week as Education Coordinator. Jaylan recently graduated from Furman University in Greenville, SC, where we are heading July 21-31, 2019 for CBA Executive Banking School. You will all be happy to know he passed the customary CBA Knowledge Test with flying colors! Welcome Jaylan and congratulations to Maren and Jake!

Banks Pass Fed Stress Tests: The Federal Reserve yesterday released the results of the Comprehensive Capital Analysis and Review (CCAR). The Fed declared the 18 banks examined as having "strong capital levels and virtually all are now meeting supervisory expectations for capital planning."

This assessment comes a week after the Fed released the Dodd-Frank Act Stress Test (DFAST), where the same 18 banks easily passed.

"The stress tests have confirmed that the largest banks are both well capitalized and place a high priority on strong capital planning practices," said Vice Chair for Supervision Randal K. Quarles. "The results show that these firms and our financial system are resilient in normal times and under stress."

The Fed did not object to any bank's capital plan but did require Credit Suisse's U.S. holding firm address certain limited weaknesses in its capital planning process.

The Fed's release noted "the largest and most complex banks have more than doubled their common equity capital from around $300 billion to roughly $800 billion" since the first stress tests were held in 2009.

A copy of the Fed's release is available here.

CFPB Extends Comment Period for ANPR on HMDA Data Points: The CFPB yesterday extended the comment period on the HMDA ANPR from July 8 to October 15, 2019. CBA had joined others in asking for more time to comment so we could get more information on the difficulties of complying with the new “discretionary” data points in HMDA. Consumer groups had asked for more time as well, as they want to see the aggregate 2018 HMDA data before they comment. Although we only asked for an additional 30 days, the CFPB provided three months. Though the long comment period is good news as it gives us more time to consider our comments, it obviously extends any final rule still further into the future.

CFPB Holds Symposium on Abusive Acts or Practices: The CFPB on Tuesday held the first symposium in a series exploring the Bureau’s powers, outreach, and responsibility. This symposium focused on the Bureau’s UDAAP authority. Specifically, the second “A,” the “abusive” prong of UDAAP authority given to the CFPB. The Bureau brought together two separate panels of experts to discuss the issue. Some key takeaways are available here.

CBA is encouraged by the Director’s commitment to continue investigating the powers and responsibilities of the Bureau and looks forward to further engaging with the Bureau as they continue this pursuit.

CFPB, Fed Issue Final Funds Availability Amendments to Reg CC: The CFPB and Federal Reserve jointly published amendments to Regulation CC this week, which implement a statutory requirement to adjust for inflation the amount of funds depository institutions must make available to their customers.

The Agencies' amendments adjust the required dollar amounts and incorporate other technical amendments required by the Economic Growth, Regulatory Relief, and Consumer Protection Act (S. 2155), which in part extends coverage to American Samoa, the Commonwealth of the Northern Marina Islands, and Guam. This rule is effective July 1, 2020, except for the amendments to §§ 12 CFR 229.2(c), (ff), and (jj), 229.12(e), 229.43, and 12 CFR Part 1030 which are effective 60 days after publication in the Federal Register.

Congressional Update: Both chambers of Congress will adjourn next week for the Independence Day Recess.

Following the recess, there are several noteworthy hearings, including:

Bank of America Releases Digital Debit Card: Bank of America launched a digital debit card on Tuesday allowing customers to make immediate transactions via mobile wallets such as Apple Pay and Google Pay. While customers wait for their permanent card, the digital debit in and mobile app features have the same protections and benefits as a physical card, and you can get cash or make deposits at Bank of America’s cardless ATMs.

“Our goal is to bring never-before-possible convenience to clients,” said CBA Board MemberDavid Tyrie, Head of Advanced Solutions and Digital Banking at Bank of America. “With our new digital debit card, clients can transact immediately and avoid waiting for their permanent card. This feature is one of several new digital offerings that reinforce our commitment to making clients’ financial lives easier.”

CBA’s State of the Week is NEW HAMPSHIRE, where more than a quarter of Granite State residents banks with a CBA member! CBA members in New Hampshire hold $32 Billion in total assets, employ 6,000 people, provide $800 Million in small business loans and serve 600,000 customers. Check out our state by state numbers here!