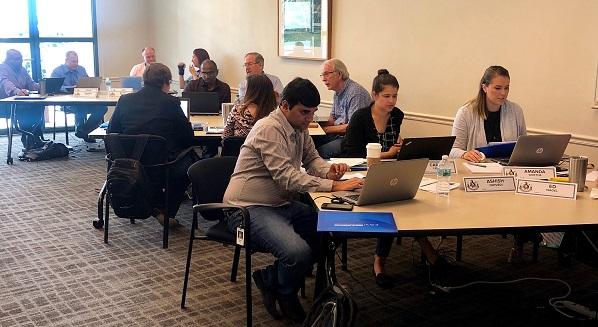 The immensely popular program leverages a proprietary simulation of a retail banking marketplace and was instructed by CBA Vice President of OnSite Education Tom Dent.

Interested in bringing advanced education directly to your team? Find out how our programs can take your team to the next level here.

Cajun Thoughts: WATERS, BEATTY REQUEST BIG BANK DIVERSITY DATA Chairwoman Maxine Waters and Diversity and Inclusion Subcommittee Chair Joyce Beatty sent letters to 37 big bank holding companies (with more than $50 billion in assets) requesting demographic data of employees and board members. They also intend to collect details on the lenders’ diversity policies and investments in minority-and women-owned businesses …  FIRST BANK FAILURE SINCE 2017 A $36.7 million bank fails…Regulators closed The Enloe State Bank in Texas late last week, marking the first bank failure since December 2017 and the first in Texas in 5+ years. The FDIC said about $500,000 of deposits exceeded insurance limits and the failed bank is estimated to cost the DIF $27 million, more than 73% of the failed bank’s asset size. This amount is not a significant hit to the DIF – what is significant, however, is the acquiring bank (Legend Bank in Bowie, TX) only purchased $5 million of the supposed $32 million in assets … BB&T/SUNTRUST UPDATE The new BB&T/SunTrust name is… Coming this month!  But that isn’t all that is coming… As SunTrust CEO Bill Rogers announced this week the bank’s community investment in Atlanta will increase from $50 million to $100 million annually over the next three years following the proposed merger. BB&T also stated plans to give back to Winston-Salem, with a focus on affordable housing, workforce and economic development, financial wellness, health and human services, and access to arts programs as the combined bank prepares to move its headquarters out of both cities and into Charlotte, N.C.

FCC Updates Robocall Ruling, Addresses CBA Concerns: The FCC voted Thursday to adopt a declaratory ruling aimed at preventing illegal robocalls. The draft ruling would allow for phone carriers to automatically opt customers in to call blocking technologies in an effort to thwart fraudulent robocalls. The original draft ruling, however, would have potentially blocked legitimate calls from banks without legal recourse, and did little to ensure customers were notified that they would now be automatically opted-in to call blocking technology.

After meeting with and writing to the FCC to outline our concerns, the Commission noted during their vote the importance of a mechanism for legitimate callers to challenge any negative designation their calls receive or stop their numbers from being blocked. The Commission also noted the importance of carriers properly notifying customers they had been opted-in to call blocking technology to ensure customers receive the calls they want and need. Both should be included in the declaratory ruling that will be published later this month, largely due to the efforts of CBA and our joint-trade partners.

The declaratory ruling by the FCC, however, could actually end up hurting consumers by blocking, without notice, legitimate calls from banks, other financial institutions, retailers or health care providers.

A copy of the letter CBA sent along with several other trade groups is available here.

CFPB Finalizes Delay of Payday Rule’s Mandatory Underwriting Provision: This morning, the CFPB finalized the delay of the August 2019 compliance date for the mandatory underwriting provision of their payday rule. The 15 month delay will require compliance with the mandatory underwriting provisions by November 19, 2020. CBA has advocated for a delay of the entire rule to Director Kraninger and her staff.

A copy of CBA's most recent letter is available here.

This was the final meeting of the advisory boards before new members join the ranks this September. While the various boards met separately on Wednesday, they met together to speak about debt-collection on Thursday, with members reflecting the need for clear and consistent standards for communication methods throughout the debt-collection process.

When questioned about the debt-collection NPRM's effect on creditors, CFPB Director Kathy Kraninger stated while the rule is built to deal with debt-collectors as defined in the Fair Debt Collection Practices Act, applicability to the provisions in the NPRM were in the back of her mind.

Chairman McWilliams on CRA, Small-Dollar: FDIC Chairman Jelena McWilliams spoke at a community banking event this week in Washington, D.C. During her remarks, she discussed several community bank issues and some items of note for CBA Members. Her full remarks areavailable here and highlights are below.

Chairman McWilliams noted she is about halfway through her 50-state listening tour and has directed the FDIC to increase efforts to:

While Chairman McWilliams frequently weaves her personal story into her speeches, the following quote about her immigration story was both new and eloquent:

Chairman Powell on Trade: Federal Reserve Chairman Jerome Powell, discussing a potential U.S. trade war with Mexico and China, said the Fed is "closely monitoring the implications of these developments for the U.S. economic outlook and, as always, we will act as appropriate to sustain the expansion, with a strong labor market and inflation near our symmetric 2 percent objective."

CFPB Releases Semiannual Report to Congress: The Office of the Inspector General (OIG) for the CFPB and the Fed released its semiannual report to Congress. During the covered period (October 1, 2018 - March 31, 2019), Director Kathy Kraninger began her tenure at the CFPB and Michelle Bowman joined the Board of Governors at the Fed. In addition to processing 262 hotline complaints and closing 13 investigations, the OIG highlighted the following actions:

Brandee McHale to Lead Wells Fargo Philanthropy, New Strategy: Wells Fargo unveiled its new philanthropy strategy on Wednesday, along with appointment of a new head of philanthropyBrandee McHale. The bank’s new foundation puts a strong emphasis on the housing affordability crisis and the problem-solving needed to help get more people into safe and reasonably priced homes. Wells Fargo also announced $1 billion in philanthropy alone through 2025 to address challenges of the U.S. housing affordability crisis, including homelessness, available and affordable rentals, transitional housing and home ownership.

SunTrust to Double Commitment to Atlanta: As SunTrust prepares to move its headquarters out of Atlanta when it mergers with BB&T, CEO Bill Rogers said community investment in Atlanta will balloon from $50 million to $100 million over the next three years. While Rogers did not reveal any specifics about the impending merger, the combined bank is expected to continue local sponsorships, including the Atlanta Braves' SunTrust Park, which will be renamed.

CBA’s State of the Week is MISSOURI, where more than a quarter of Show-Me State residents bank with a CBA member! Home to Commerce Bank, CBA members in Missouri hold $86 Billion in total assets, employ 22,000 people, provide $2.1 Billion in small business loans and serve 1.6 Million customers. Check out our state by state numbers here.