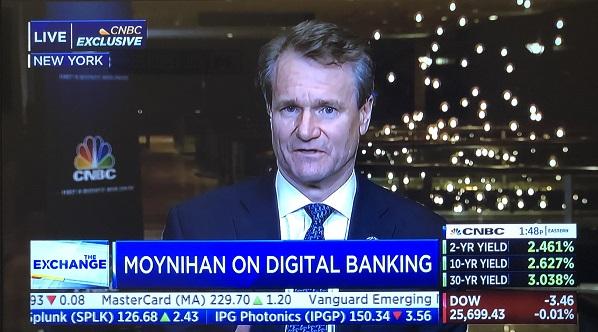 CBA LIVE 2019: Don't miss Bank of America Chairman of the Board & CEO Brian Moynihan speak at CBA LIVE about the state of retail banking.

Mr. Moynihan sat down with CNBC's 'The Exchange' on Thursday to discuss the bank's efforts toward digital banking, diversity, the U.S. economy and other hot button topics. Bank of America plans to open 500 U.S. branches over the next four years!

Check out the interview here.

Cajun Thoughts: MARK CUBAN VS. ALEXANDRIA OCASIO-CORTEZ On student lending. AOC, as she is known in media land, recently opined ALL federal student loan debt ($1.5 trillion) should be forgiven — even those who are actually meeting their obligations. How absurd is that? Well, enter entrepreneur Mark Cuban who tweeted back with his own solution to offer means tested repayments and cap future student loans per family to eradicate increasing tuition. Well we think he is close to a very good solution. The CBA solutions include placing responsible caps on federal loans to allow access without overborrowing, increasing Pell Grants so federal dollars can help families with the most need and reworking college "award letters" to differentiate between free money and loans ... A good first step would be improving federal student loan disclosures. Currently they do not offer a clear, personalized, plain-language overview of key loan terms specific to each borrower like private loans. I hope to meet with Mark soon to discuss his ideas ... SENATOR ELIZABETH WARREN CAVED Talk about surrendering to try to secure votes in her quest to become President of the United States. Warren recently proposed a comprehensive housing reform bill that included requiring credit unions to comply with the Community Reinvestment Act. I thought that provision was actually fitting as over 300 credit unions are now over $1 billion in assets, holding 66% of the total credit union asset share in America. It only seems fair as all banks are examined by regulators to ensure they are meeting CRA requirements. Well lo and behold Senator Warren capitulated this week and removed this provision. With the largest credit unions like Navy Federal closing in on $100 billion in assets, I can only assume she believes any bank under $100 billion should also not be subject to CRA. Should she now also push for a CRA exemption for all banks under $100 billion?  ...  HEAVY HEARINGS ON THE HILL Big week for financial services and banking hearings on the Hill. CFPB Director Kraninger testified before the Senate Banking Committee after testifying last week before the House Financial Services Committee for the Bureau's semi-annual report. Wells Fargo CEO Tim Sloan appeared before the House Financial Services Committee on behalf of the bank's ongoing corporate transformation. I am proud of the progress being made across the industry ... MILLENNIALS LOVE MEGABANKS I read an article this week reporting 56% of Millennials bank with the four largest banks. The myth Millennials don't like big banks continues to be proven wrong.

CBA LIVE is the premier retail banking conference with nearly 1,500 representatives from across the financial services industry, including more than 750 senior-level bankers and high-profile regulatory leaders.

On Tuesday, CBA will present the Joe Belew Award to the CBA member bank applicant with the most innovative and impactful small business initiatives, highlighting its "Currency of NOW" efforts in the community. CBA will also recognize Chris Manderfield of KeyBank, the top student from CBA's Executive Banking School with the Tem Woolridge Award.

Prior to the hearing, CBA wrote committee leadership outlining several legislative and regulatory reforms to improve the CFPB's ability to fulfill its mission. CBA's letter is available here.

This is the first time Director Kraninger has appeared before the committee since her confirmation hearing. She pledged the Bureau will continue to pursue bad actors and take enforcement actions against them. Furthermore, the Bureau is reconsidering "the sufficiency of the evidence and analysis supporting the underwriting requirements of the short-term small-dollar lending rule." She also highlighted the Bureau's efforts to help Americans save and noted the Bureau's reports on assessments of past rules, consumer credit trends, and examining elder financial fraud. Looking ahead, her priorities will be "emphasizing stability, consistency, and transparency" and she will examine how to best utilize all of the tools of the Bureau – broadening the agency's focus and primary goal towards the prevention of harm.

Supervisory observations from the CFPB include:

JPMorgan Chase Adding 90 Branches in New Markets: JPMorgan Chase announced plans to add bank branches in nine new markets this year and also continue expansion into Philadelphia, Boston and Washington, D.C. The bank plans to add up to 90 branches in new retail locations like Charlotte and Nashville, open branches near major campuses in Alabama and Nebraska, employ 700 branch workers and add cardless ATMs to perform 70% of teller transactions. In total, about 30% of all new JPMorgan Chase branches to open over the next 5 years will be in low-to-moderate income communities. Learn more about the expansion plans here.

Diversity & Inclusion Update: LexBlog published a piece last week noting the CFPB's Office of Minority and Women Inclusion recently sent letters inviting the self-submission of diversity and inclusion information. LexBlog noted that by sending the letters the "CFPB is sending a strong signal to industry that D&I policies and practices will be a Bureau focus under Director Kraninger's leadership ... The CFPB's letters and the creation of the subcommittee signal that financial institutions are likely to find their D&I policies the subject of greater attention and scrutiny in the coming months."

CRA Update: The National Community Reinvestment Coalition (NCRC) hosted their "Just Economy Conference" this week which featured remarks from Federal Reserve Board Chair Jerome Powell and Board Member Lael Brainard to discuss the Community Reinvestment Act. Chairman Powell spoke first on the issue, highlighting the struggles of low- and moderate-income individuals and families in today's economy. Powell stressed the importance of interagency coordination on all things CRA, and that he supports interagency efforts to revise CRA to "promote clarity and consistency in our evaluation of banks, particularly in light of the changes in the way bank products and services are delivered." Chairman Powell confirmed Governor Brainard is the Fed's representative on interagency CRA discussions.

Governor Brainard's speech delved into a number of concrete ideas being considered by the Fed to improve CRA evaluations, provide more certainty, reflect some of the changes in retail bank delivery of products and services, and retain the importance of local communities.

A number of other possible ideas mentioned include:

Suite 550 Podcast: On the latest episode of CBA's Suite 550 Podcast, I sat down with CBA's Vice President of Congressional Affairs Kris Fallon to discuss a recent poll examining Americans' views on student lending. The CBA-conducted poll found Americans strongly believe student loans should carry clear, personalized, plain-language disclosures about the loan's total costs. These disclosures are not included on federal loans but are already provided by private student lenders. The poll also found nearly 85% support placing responsible caps on federal loans to offer access to a quality education without setting up a debt trap post-graduation.

CBA's State of the Week is ILLINOIS where more than 1 out of every 3 residents banks with a CBA member! CBA members in the Prairie State hold $485 Billion in total assets, employ 68,000 people, provide $9.7 Billion in small business loans and serve 4.6 Million customers. Illinois is also home to BMO Harris Bank, Discover, First American and State Farm. Check out our state by state numbers here.