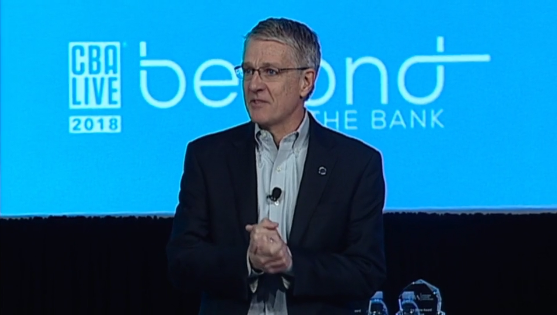 CBA LIVE 2018: My Favorite Numbers – CBA LIVE 2018 was one for the record books. Here are a few of my favorite numbers from this year's conference:

Hats off to CBA Board Chairman Brad Conner for his leadership, and we look forward to continuing to build upon our successes.

My Top CBA LIVE Takeaways – There were surely many takeaways from the conference, but these are some of my biggest takeaways:

Above All Else, This is Your Year – As I mentioned in my opening remarks at CBA LIVE: This is your time to make a difference. Technology has allowed banks to better serve consumers, the regulatory environment is shifting, and the industry and economy have made great strides over the past 10 years. This is the year for us to get to work and continue to get the job done on behalf of consumers.

Looking to Relive the Action? – You can watch the below general sessions by clicking here, which include:

Discover and PNC Win Joe Belew Award – Each year, CBA's annual Joe Belew Award honors the memory of Joe Belew, former CBA president, and his commitment to community development. This year, we were proud to bestow the award to PNC Bank and Discover. Job well done!

Great National Anthem Performance – We were thrilled to have my 1984 Jennings High School classmate Angela Doggett in Orlando for CBA LIVE to sing our nation's national anthem. She continues to have a wonderful voice and did an excellent job! Thank you for being a part of the event.

What Others Are Saying About CBA LIVE – In his weekly banking report, Tom Brown, CEO of Second Curve Advisory Services, said CBA LIVE is the "best banking conference of the year." Additionally, Don Neal of 360 Media outlines 10 reasons why CBA LIVE has been so successful, including team effort, member engagement and having our finger on the pulse of the industry. Get the full list here.

Talks Set Between House and Senate – Senate Banking Chairman Mike Crapo (R-ID) said he will discuss his regulatory relief bill with House members. Previously, House Financial Services Chairman Jeb Hensarling (R-Texas) said the House would not move the bill "unless and until" the Senate negotiates with the House about potential changes, but Senate leadership is not optimistic on revisiting the Crapo bill this Congress. The legislation mostly focuses on institutions under $10B, but raises the threshold for systemically important financial institution to $250 billion, makes it easier for customers to open accounts online or via mobile devices and reduces the threat of synthetic fraud, among other provisions.

CFPB Commission Bill Introduced in House – We need a long-term solution to provide balance and stability at the CFPB, no question about it. Thankfully, Reps. Dennis Ross (R-Fla.) and Kyrsten Sinema (D-Ariz.) introduced bipartisan legislation with Reps. Ann Wagner (R-Mo.) and David Scott (D-Ga.) to change the CFPB's governing structure from a sole director to a bipartisan, Senate-confirmed commission. We fully endorse this bill and will continue to push Congress to pass this important, consumer-centric measure.

Court Supports CBA in TCPA Ruling – Good news all around for American consumers as a U.S. Appeals Court vacated both the FCC's overly broad reading of what qualifies as an Automated Telephone Dialing and the agency's order on reassigned numbers. In effect, the FCC's policy would have limited consumers access to critical and time-sensitive financial information, such as low balance notifications, fee avoidance alerts and due date reminders. The Court's decision is a significant step toward greater clarity to the FCC's poorly designed policy.

CFPB Issues Ninth RFI – The CFPB issued a request for information (RFI) soliciting public feedback about its inherited regulations and inherited rulemaking authorities. The comment period will last 90 days from the date of publication in the federal register. This is the ninth in a series of requests for information (RFI), which include enforcement processes, supervision processes and consumer complaint reporting, among others. CBA will be commenting on all outstanding RFIs.

CBA-Supported Small-Dollar Bill Passed House Committee – This week, the House Financial Services Committee passed Rep. Trey Hollingsworth's (R-Ind.) bill which will provide consumers access to small-dollar bank loans. As noted by the CFPB and Federal Reserve, there is a great need for short-term, affordable credit. Historically, banks have been able to fill that need for consumers. "Washington-knows-best" regulations, however, have forced Americans facing temporary financial hardships to use pawn shops, pay day lenders, and high-cost online or overseas lenders with limited oversight. This bill aims to provide relief for consumers and we are proud to have supported this bill.

CFPB is Accepting Applications for its Advisory Board and Councils – The CFPB is accepting applications for its Consumer Advisory Board, the Community Bank Advisory Council and the Credit Union Advisory Council. These groups provide the agency with information about emerging trends and practices in the consumer financial marketplace.  Currently, former CBA Board Member and PNC Alum Neil Hall and Current Board Member Will Howle of Citi serve on the Consumer Advisory Board. I would encourage anyone interested to apply here. It is critical regulators have quality input from those on the front lines of banking.

Fed Raises Rates – The Central Bank raised interest rates for the first time in 2018 and are now expected to raise rates a total of three to four times this year.