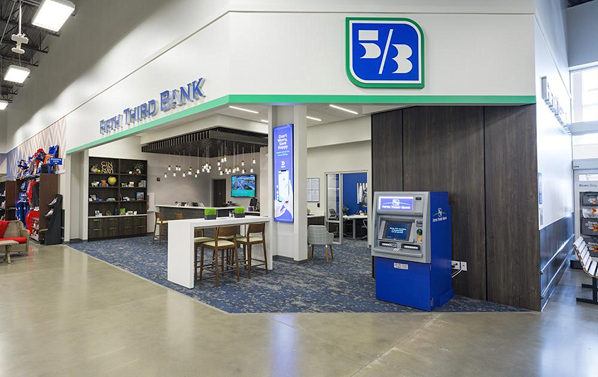 Fifth Third Bank recently revealed a fresh, hip design for its next-generation branch, to be used in all of its new, relocated or remodeled branch locations.

Cajun Thoughts: CFPB APPOINTS PERMANENT DEPUTY DIRECTOR As you may remember, former CFPB Director Richard Cordray never filled the Deputy Director position, which is the number two position at the Bureau, on a permanent basis until the final days of his tenure, leaving it vacant for some 18 months. Kudos to Director Kathy Kraninger for ensuring the Bureau has a succession plan by naming Brian Johnson the official Deputy Director …  ROBERT F. SMITH RELIEVES MOREHOUSE 2019 GRADUATES OF STUDENT DEBT Billionaire Robert F. Smith’s family estate announced plans to pay off the Morehouse College Class of 2019 student loans. Reports reveal there were nearly 400 graduates, and the Smith family will be on the hook for $40 Million. Yup, that’s an average of about $100,000 per student. I certainly commend Mr. Smith’s gift as it is both admirable and generous. However, there are very few billionaires who will perform this deed, and it does not address the real problem: skyrocketing tuition caused by federal overlending. CBA’s recommendations to ensure students can responsibly finance their higher education are available here …  KUDOS TO THE OCC: The OCC has implemented its first-ever high school student summer internship program. They will intern in each division of the OCC and spend Fridays taking advantage of educational opportunities in D.C. such as the Smithsonian's, Capitol tours, White House tours and meetings with the 15 executive branch departments and regulatory agencies. Students are provided a bus pass, a stipend of $5,000 ($20/hour) for their work, and five professional suits and dresses … BOSTON GLOBE SETS MILESTONE You may have read the Boston Globe now has more digital subscribers than print subscribers, and it is likely the only traditional, regional daily news source to do so. I wonder when a regional bank will have more digital transactions than in-person transactions … SEN. TOM COTTON’S SACRED DUTY I’m looking forward to reading Senator Tom Cotton’s new book titled Sacred Duty: A Soldier’s Tour at Arlington National Cemetery. The book tells the behind the scenes story of “The Old Guard,” the U.S. Army Unit dedicated to honoring our country’s heroes, including the funeral of President George H.W. Bush, which was executed flawlessly … POLITICAL JUNKIE ALERT: ELECTION 2020 VOTER PERCEPTIONS As reported by Axios, Engagious and Focus Pointe Global recently conducted a focus group of swing voters in Iowa, including some who supported President Obama and then President Trump, with astonishing results.

CBA Comments on Arbitration Amendment, Green Amendment: Strictly along party lines the House of Representatives this week passed legislation undoing the actions of former CFPB Acting Director Mick Mulvaney. In advance of the vote, CBA wrote Congress discussing provisions in the legislation. CBA and other financial services trade associations also wrote a letter addressing an amendment being offered by Rep. Al Green (D-Texas) to reverse Congress’s previous vote to overturn the CFPB’s flawed arbitration rule. While the bill passed the House, it will not get taken up by the Senate.

As CBA noted when the Consumer First Act was before the House Financial Services Committee, instead of partisan legislation, the CFPB needs a bipartisan, Senate confirmed commission to serve as a proper check on the power and ability of the Bureau’s sole director to act unilaterally. A commission of individuals with diverse experience and expertise related to consumer financial products and services would depoliticize the CFPB and elevate its functions and transparency by providing an open debate of differing ideas, viewpoints, and solutions, encouraging all sides to contribute to carefully conceived and lasting solutions for consumers.

A poll completed by Morning Consult in 2017 found that by a margin of three to one, registered voters support a bipartisan commission over a sole director.

The CFPB’s own study found average cash relief for consumers in arbitration was $5,400 compared to just $32 when consumers were engaged in a class action lawsuit. Lawyers, on the other hand, received $424 million in fees over the period studied by the Bureau.

At the outset of the hearing, Chairman Mike Crapo (R-Idaho) questioned the witnesses directly about CBA’s letter, prompting the witnesses to share their views on CBA’s recommendation that the responsibility for collection of beneficial ownership information be shifted from the banks to FinCEN. There was consensus from all witnesses that while banks must continue to collect the information to comply with the CDD Rule, a centralized database of beneficial ownership information or a “one-stop-shop” would be useful

Currently, banks are required to collect ownership information from companies prior to account opening. This practice requires banks to undertake quasi-law enforcement activities and does not prevent shell corporations from being formed in the first place.

A federal database of beneficial ownership information would provide transparency, enable financial institutions and law enforcement to search and rely on the government’s information to more efficiently deploy resources in the fight against money laundering, and better protect the nation’s financial system from corruption, terrorism and criminal activity.

Earlier this month, CBA wrote the House Financial Services Committee in support of their work to modernize the anti-money laundering and counterterrorism regulatory system. The letter also stated CBA’s support for H.R. 2513, the Corporate Transparency Act of 2019, which would create a secure beneficial ownership directory held by FinCEN.

CFPB Spring 2019 Rulemaking Agenda: The CFPB released its Spring 2019 Unified Agenda highlighting the rules currently in process and expected to be tackled through the first two quarters of this year.

Highlights include the Bureau's proposals on third-party debt collection, HMDA, and payday loans, all of which CBA will be submitting comments on.

The Bureau is currently engaged in rulemakings implementing the 2018 Economic Growth, Regulatory Relief, and Consumer Protection Act, aiming to achieve consumer protection objectives of the statutes while minimizing regulatory burdens on the industry.

One of the rulemakings currently underway as a part of this process relates to HMDA data and disclosure of that information. The Bureau is also planning to develop rules to implement Section 1071 of the Dodd-Frank Act to require institutions to collect, report, and make public certain information concerning credit applications made by women-owned, minority-owned small businesses.

As Bureau leadership is considering further prioritization of rulemaking activities, the Bureau has decided not to revise its current list of long-term projects. As such, the Bureau expects the Fall 2019 Agenda to issue a more comprehensive statement of priorities.

House Passes Bill, Changes to U.S. Retirement System: The House’s bipartisan-backed Secure Act would repeal the age cap for contributing to traditional retirement accounts and increase the age to begin account withdrawal. These changes would be the most significant to retirement plans since 2006. The Senate plans to vote on the Secure Act instead of its own version.

CBA's State of the Week is VERMONT, where more than 15% of Green Mountain State residents bank with a CBA member! CBA members in Vermont hold $6 Billion in total assets, employ 2,000 people, provide $200 Million in small business loans and serve 100,000 customers. Check out our state by state numbers here!