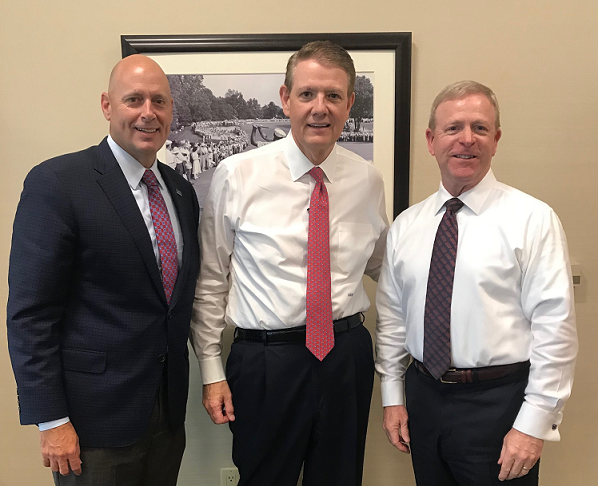 I continued my CBA membership tour this week with a trip to Comerica in Dallas, Texas where I met with CBA Board Member Mike Aust (Right), newly appointed CEO and President Curtis Farmer (Middle) and CBA committee members. I loved the artifacts in Curt’s office (Take a guess?)

Cajun Thoughts: CRA PROPOSAL COMING SOON As I’m sure you remember from our CBA LIVE impromptu chat with FDIC Chairman McWilliams and OCC Comptroller Otting, a meeting with the FDIC, OCC and Fed was planned to review CRA. Chairman McWilliams announced Wednesday bank regulators hope to have a draft joint proposal modernizing CRA in the next few weeks, and also said the agencies agreed to undertake joint guidance on small-dollar lending …SPEAKING OF JOINT POLICIES On CRA, CBA has a dedicated website containing comment letters, op-eds and videos explaining why CRA modernization is important to bankers, what we believe is necessary for modernization and how the successful modernization effort will allow banks to do more in local communities. On small-dollar lending, CBA has been clear Americans are better served by relying on the well-regulated banking industry during financial emergencies than being forced to less-regulated sources of short-term credit like payday lenders, online lenders, pawn shops or title loan companies. A list of our most recent comments on this topic is available here … INTEREST RATES AND DEPOSIT GROWTH I remember Sherief Meleis with Novantas predicting a few years ago when savings accounts increase interest rates, customers would have no hesitation “rate shopping” and move their money, unlike in past years where they would just park their money. Well, low and behold, JPMorgan Chase just announced some people ARE moving a portion of their savings to achieve higher yields - but sticking with their primary bank overall … SOMETHING THAT CAUGHT MY EYE I read anarticle detailing the sharp decline in American bank branches since 2008. Financial research firm CACI found branch activity has fallen close to 50% in the past decade and is expected to fall another third in the next five years. It’s interesting to note costs drop 95% when customers choose to bank online versus at a branch. The digital transformation is really happening, folks! … TWO TYPES OF AIRPORT PEOPLE? Ever been late for a flight? It is on my bucket list to be late, just once. Whether it is our daily internal morning meeting, church, a tee time, a sporting event or a flight, I must be early. Fortunately, there are people that exist that are the opposite – my motto: If you are not early, you are late.

FDIC Issues Quarterly Banking Profile:  In her opening statement for the QBP, FDIC Chairman Jelena McWilliams repeated the positive economic outlook she delivered in the previous quarter, stating "the nation's banks are strong" and the current economic expansion will be longest on record if it continues until July. However, she reiterated a caution to the industry she delivered in Q4 2018 that "the competition to attract deposit and loan customers is strong, and therefore, banks need to maintain rigorous underwriting standards and prudent risk management. These factors have increased banks' exposure to interest rate, liquidity and credit risk."

Highlights from the report:

CBA members work every day to improve the financial outcomes of their communities and properly serving low-to-moderate income communities through the Community Reinvestment Act (CRA) is a top priority for our members. However, we believe the value of CRA covered agreements is heavily outweighed by the undue burden they place both on insured depository institutions (IDIs) and non-governmental entity or persons (NGEPs) and as such, would support a repeal of 12 USC § 1831y. Annual reporting would do much to alleviate the burden created by massive amounts of time and workforce put into CRA covered agreements.

HSBC Deploys Fourth ‘Pepper’ Robot: Pepper, a robot from HSBC Bank, is going to a Miami branch this week and possibly to other Florida locations later. The Miami launch marks the fourth for HSBC, following deployment at branches in New York City, Seattle and Beverly Hills. Pepper greets, assists and offers information to customers about the bank. Learn more here.

KeyBank, School System Partner to Teach Financial Skills: KeyBank and Akron Public Schools (APS) in Ohio have opened a mock bank at a career academy to teach students financial literacy. Students will not only learn the basics like account management, but also assist with bank operations. As part of the mock money management, accounts will hold “KeyCash” – dollars earned by students for good grades or positive behavior in school. The KeyCash will be spendable on school merchandise, tickets to prom, an amusement park or sporting event. More information is available here.

CBA’s State of the Week is CONNECTICUT, home to CBA Chair Elect Nitin Mhatre’s Webster Bank and Synchrony, where more than 1 out of every 4 residents banks with a CBA member! CBA members in Connecticut hold $145 Billion in total assets, employ 30,000 people, provide $3 Billion in small business loans and serve 1.5 Million customers. Check out our state by state numbers here!