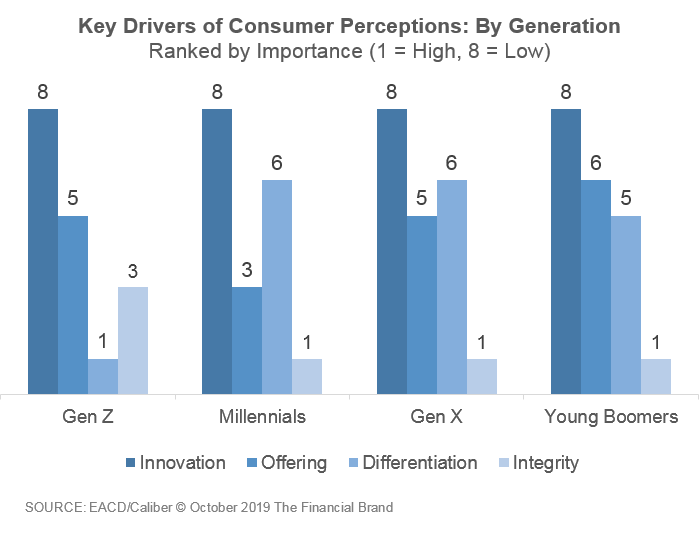 What is most important to younger consumers?

In a recent report conducted in Q1 by Caliber, integrity was considered most important by consumers in every generation except Gen. Z, where it still ranked third.

“What actually matters most to people when it comes to building trust in financial institutions,” the report states, “is that these institutions demonstrate a responsible behavior.”

Cajun Thoughts: BIGGEST OBSERVATION AT MONEY 20/20 The lack of bank presence - significantly less than previous years. I read it as banks are either developing their own technology or have all their partnerships secured. I also got to spend time with OCC Comptroller Otting, FDIC Chairman McWilliams and CFPB Director Kraninger. Update: Brian Schneider has started as the CFPB's Associate Director in the Supervision, Enforcement and Fair Lending Division ... MY CHAT WITH BMO'S ERNIE JOHANNSON CBA Board Member Ernie Johannson of BMO Harris called into Suite 550 this week to discuss being selected one of the Most Powerful WOmen in Banking and more. Catch our conversation here ... WARREN WHITE HOUSE If Democratic Sen. Elizabeth Warren wins the White House, the future of the stock market would be bleak, said billionaire Paul Tudor Jones, who joined hedge fund managers Rob Citrone and Jeff Vinik in forecasting dire financial consequences resulting from a Warren victory. Jones made the remarks during the Robin Hood Investors Conference and said the S&P 500 could face a 25% drop, mainly because of issues with Warren's proposed wealth tax ... THE MORTGAGE MONSTER The Federal Housing Administration will enforce False Claims Act violations after reaching an agreement with the Department of Justice, said Ben Carson, secretary of the Department of Housing and Urban Development. Carson called the False Claims Act a "monster" that had forced banks out of the mortgage business ... SMALL DOLLAR WARS Despite pressure from Congress, the CFPB has not indicated it will change its position on small dollar lending. The Bureau has proposed changes to a rule that removes a clause requiring lenders to consider the abilty to repay and officially delayed compliance iuntil November 2020. CBA has long advocated for a delay of the entire rule, noting the level of underwriting required for these loans is not effective or cost-efficient for small-dollar, short-term lending. Learn more about CBA's position here ... CRA IN D.C. We had CBA members in town this week to talk all things CRA with the OCC and the Fed. Looks like the CRA NPR is still set to drop soon, likely around Thanksgiving, and we certainly hope all three prudential regulators will move forward together on the proposal. However, both the OCC and FDIC are willing to go alone. Stay tuned and learn more about CBA's recommendations to successfully modernize CRA here.

*CBA LIVE ditches the blah for ah-ha. It’s where to go for answers to even the most challenging questions and find clarity amid the clutter.

CBA on College Affordability Act Markup: CBA this week wrote the Chair and Ranking Member of the House of Representatives’ Education and Labor Committee to offer comments on the College Affordability Act (H.R. 4674) markup. The letter calls for bringing federal student loan disclosures in line with the pro-consumer, plain-language disclosures offered on private loans.
CBA also proposed capping the current unlimited nature of federal PLUS loans at a responsible level aimed at ensuring college access while preventing borrowers from becoming mired in unaffordable debt caused by the same federal over-lending which has fueled skyrocketing college tuitions.
CBA encourages policymakers to address the root causes of student debt: the cost of college and federal over-lending. Improved up-front and ongoing disclosures about the terms and conditions of federal loans are a critical first step. Banks are eager to offer solutions based on their excellent record serving customers through effective disclosures and, when necessary, working with borrowers to help overcome obstacles to repayment.
CBA’s letter, available here, addresses several issues, discussed below.
Fed, FDIC Finalize Resolution Plan Modifications: The Federal Reserve Board and FDIC this week finalized modifications to the agencies' resolution plan requirements.
According to a joint statement, "The final rule is substantially the same as the proposal from earlier this year. It uses a separate framework developed by the banking agencies for application of prudential requirements, and establishes resolution planning requirements tailored to the level of risk a firm poses to the financial system. The final rule is consistent with the Economic Growth, Regulatory Relief, and Consumer Protection Act and would affect domestic and foreign firms with more than $100 billion in total consolidated assets."
The most systemically important firms would submit resolution plans on a two-year cycle and for firms that pose less risk, plans would be submitted on a three-year cycle. Both groups of institutions would alternate between full plans and targeted plans.
A copy of the final rule is available here.
INDUSTRY NEWS
Citizens Bank, Microsoft to Finance XBox All Access: Citizens Bank is partnering with Microsoft to offer a payment and purchase model with integrated point-of-sale (POS) financing for the company's new XBox All Access program and a 24-month game pass. Through tech-giant Amazon, the program will offer 0 percent APR financing and Citizens will earn a percentage of the sales on the loans, marking the first time a lender, manufacturer and retailer have joined forces to "offer a seamless way for consumers to buy." More here.
BofA Revamps Mobile App, Erica Digital Assistant: Bank of America announced a new, redesigned version of its mobile app that streamlines the customer experiene with new AI features and enhancements to virtual financial assistant Erica. In addition to new security features which will debut with the app in early 2020, customers will be able to launch card disputes via mobile app and recieve an estimate of how much they need to save to pay down credit card debt. Learn more about the revamp here.
PNC Bank Recognized for Diversity: According to Wall Street Journal research, banks and insurers are ahead of the S&P 500 sectors in promoting workplace diversity and inclusion. Our sector outscores others in age diversity, ethnic diversity and the number of D&I programs, but there is room for improvement in gender and age diversity at the board level. PNC Bank was given the 2019 Board Diversity Award by DirectWomen for including more women on its board and executive team - PNC's board consists of four women and the executive team has three women.
LAGNIAPPE
CBA's Suite 550 Podcast: Catch the latest episode of CBA's Suite 550 Podcast to hear Ernie Johannson, CBA Board Member and BMO Harris' Group Head of North American Personal & U.S. Business Banking, discuss being selected one of the Most Powerful Women in Banking, a decade of BMO Harris' team of women leaders being named the Most Powerful Women in Banking and Finance, and how BMO has been a "bold leader in changing communities, building communities, supporting businesses and helping consumers achieve real progress in their finances."
Click below to listen now or subscribe on iTunes.