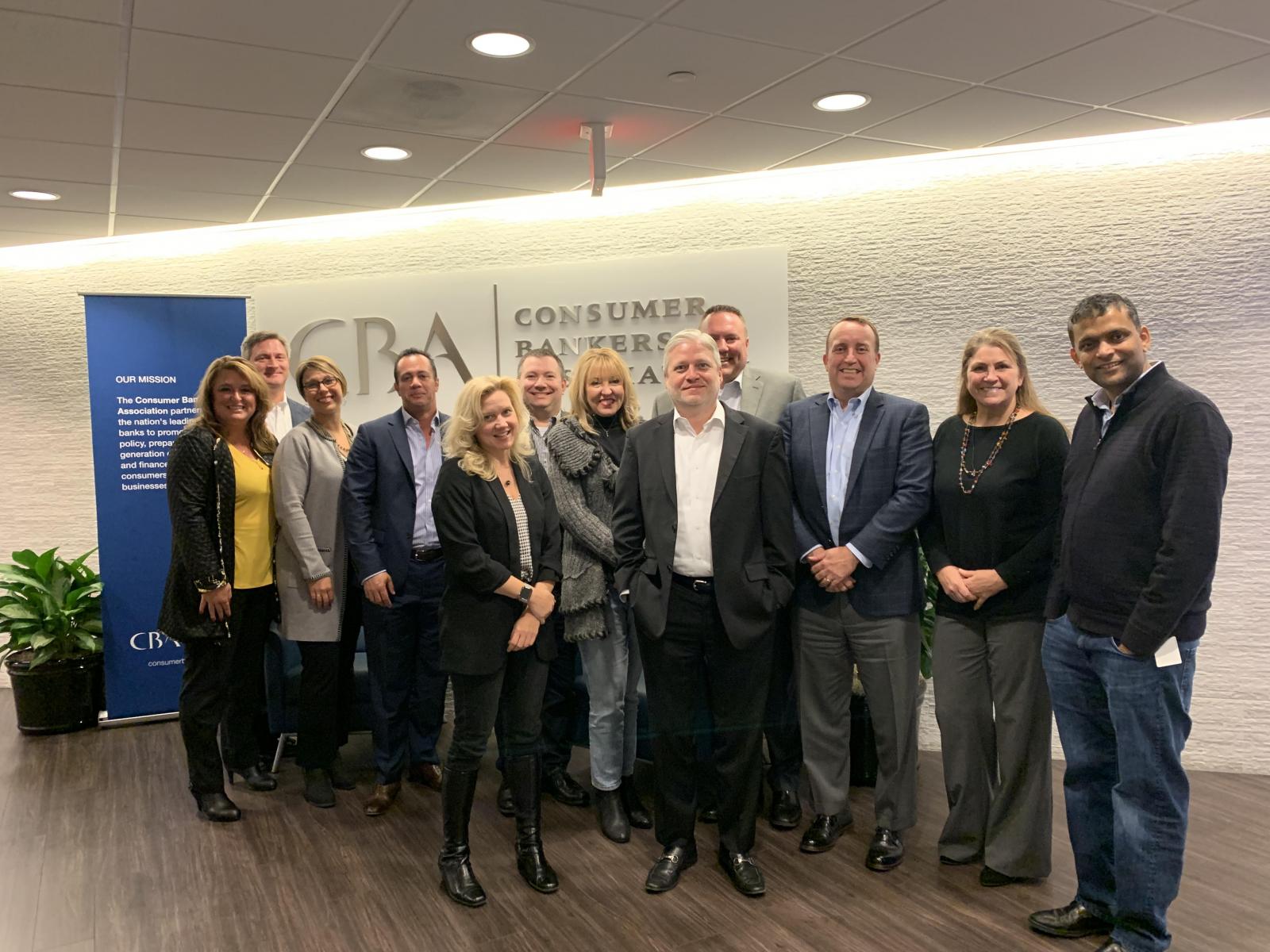 CBA General Programs
November 15, 2019
CBA is excited to announce the addition of our 14th committee – the Fraud Management Committee. Fraud has been a hot topic among many of our committees and this new committee will help centralize CBA’s efforts.
The new Fraud Management Committee is led by Chair Brian Housler of TD Bank and Vice Chair Jason Castillo of Citizens Bank.
Some more information on CBA’s latest committee is below.

Cajun Thoughts: CRA CATCH UP Consistent with past remarks, Comptroller of the Currency Joseph Otting said on Tuesday the OCC will release its CRA reform proposal by the end of this year, remaining hopeful the FDIC and Fed will join. The OCC and FDIC have indicated their agencies would release their own proposals if a joint agreement cannot be reached, and, at a hearing on Wednesday, Fed Chairman Jerome Powell chimed in noting they are focused on coordinating with the other agencies. The three agencies usually work together to develop bank regulatory policy, but creating a joint CRA plan has proven difficult. CBA appreciates the OCC leading the way and hopes the others will join in this generational opportunity ... BATTLE OF BIG TECH Seems everyone wants to be in retail banking! Facebook has joined the payment services world with the roll-out of Facebook Pay, which is comparable to Apple Pay, Google Pay and PayPal. And, Google announced plans this week to offer checking accounts to consumers next year through a partnership with Citi ... HIGH M&A, LOW VALUE According to recent data collected, 231 bank deals have been announced from January 1 to November 1 of this year, a 4% increase over last year. However, excluding the $28.1 billion BB&T-SunTrust deal, the overall dollar amount of deals this year is 19% lower than last year ... RECESSION OR NO RECESSION? A recent survey by CNBC and SurveyMonkey revealed two-thirds of Americans think the U.S. will fall into a recession in 2020 - 84% of Democrats and 46% of Republicans ... NEW IOWA POLL Mayor Pete Buttigieg is in the lead - No shortage of activity here in D.C.: Impeachment, Turkey President visit? ... READING Golfer's Journal, The Future of Everything and It's the Manager ... WATCHING New Jack Ryan Series, A Million Little Things and soon to be released The Crown.

CBA Adds Fraud Management Committee: CBA’s Fraud Management Committee will focus on industry education, legislative and regulatory issues, and information sharing for consumer fraud issues within banks. The committee is committed to taking a leadership role in providing members with an appropriate open forum to discuss best practices, emerging trends, offer networking opportunities and provide advocacy in the federal legislative and regulatory environment.
Goals:
Committee Leadership:
Below is a list of member institutions currently represented on the committee.
If your institution would like to be a part of the Fraud Management Committee, please contact committee liaisons David Pommerehn or Allison Heimberg. We are looking for individuals with overall responsibility for fraud management.

Banking conferences offer a lot of blah.*
*CBA LIVE ditches the blah for ah-ha. It’s where to go for answers to even the most challenging questions and find clarity amid the clutter.
Sign up today to be a part of CBA LIVE 2020 at the Hilton San Diego Bayfront in San Diego, CA. Save $300 with early bird rates through Friday, January 10, 2020!
REMINDER: CBA LIVE exhibit and sponsorship opportunities are OPEN and going fast! Reserve your exhibit booth and sponsorship now to secure your spot and be a part of the buzz. Hurry, fewer than 20 booths left!

D.C. DOWNLOAD
FFIEC Updates BCP Booklet: Yesterday, members of the FFIEC announced updates and a renaming of the Business Continuity Planning booklet to Business Continuity Management (BCM) to reflect updated IT risk practices and frameworks, available here.
While the changes do not impose new requirements on examined institutions, CBA believes these changes signal a renewed or increased regulatory focus on banks’ preparedness for operational resilience. Specifically, these changes reflect the expanded role information technology (IT) plays in supporting business operations and meeting customer expectations. The BCM focuses on assessing an entity's resilience through an enterprise risk management (ERM) perspective that considers technology, business operations, communication strategies, training, testing, maintenance, and improvement — issues critical to business continuity.
FDIC Releases Banking System Reports: The FDIC released a multi-part analysis of changes in the U.S. banking system since the 1950s, especially changes occurring since the financial crisis in 2008. These analyses address the shift in some lending from banks to nonbanks; how corporate borrowing has moved between banks and capital markets; and the migration of some home mortgage origination and servicing from banks to nonbanks.
Highlights from the reports include:
Bank and Nonbank Lending Over the Past 70 Years: Total lending in the U.S. has grown dramatically in the past 70 years and, since the 1970s, the share of bank loans has generally fallen as nonbanks gained market share in residential mortgage and corporate lending. In other business lines, shifts in loan holdings from banks to nonbanks have been less pronounced as banks and nonbanks continue to play important roles in lending for commercial real estate, agricultural loans, and consumer credit.
Leveraged Lending and Corporate Borrowing: Increased Reliance on Capital Markets, With Important Bank Links: Over the past decade, U.S. non-financial corporate debt reached record highs as issuance of corporate bonds and leveraged loans grew rapidly while credit quality and lender protections deteriorated. While much of this growth in corporate borrowing came through capital markets, important connections to the banking system remain.
Trends in Mortgage Origination and Servicing: Non-banks in the Post-Crisis Period: The mortgage market changed notably after the collapse of the U.S. housing market in 2007 and the financial crisis that followed. A substantive share of mortgage origination and servicing, and some of the risk associated with these activities, migrated outside of the banking system. Changing mortgage market dynamics and new risks and uncertainties warrant investigation of potential implications for systemic risk.

Citi, Google Partner to Offer Checking Accounts: The Wall Street Journal reported this week Google plans to offer checking accounts to consumers next year through a partnership with Citigroup and Stanford Federal Credit Union.
While the accounts will be accessed through Google Pay, which launched in 2015, Citi’s branding will be on the accounts, according to the Wall Street Journal, and Google will leave the “financial plumbing” and compliance to the bank. Google executive Caesar Sengupta told the Journal, “Our approach is going to be to partner deeply with banks and the financial system.” Read more here.
BMO Harris to Offer Mastercard's True Name Product: Beginning in December, BMO Harris Bank will be the first financial institution to offer Mastercard's True Name product allowing transgender and non-binary consumers to order debit and credit cards in their chosen name and not their legal name. This initiative is an effort to curb bias for customers using cards that don't match their appearance. Learn more about the cards here.
Facebook Unveils Facebook Pay: Facebook announced this week consumers will soon be able to conduct secure, in-app financial transactions on Facebook, Messenger, Instagram and WhatsApp, including fundraising donations, game purchases, event tickets, and buying products/services on some business pages and in its marketplace. The tech-giant will mine the Facebook Pay service to utilize user transaction data such as payment method and contact info to deliver target promotions.