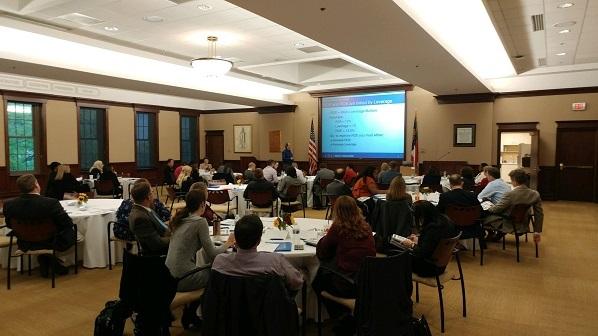 Cajun Thoughts: Thanksgiving is one of my favorite times of the year. In addition to being thankful for my family and 5 friends, I am thankful to be with the CBA Family…69 great corporate members, 110 associate members, 466 committee members, and 27 (4 more on the way) CBA Team members. Most importantly, don’t forget the Dallas Cowboys play at 4:00 PM on Thanksgiving Day.

Short of any breaking industry news, we will NOT send a Weekly Report next week in observance of Thanksgiving.

Brenda Mechling to Lead CBA Education: Some exciting news and updates from CBA HQ! Education team veteran Brenda Mechling will now serve as Head of Education Relations, responsible for the overall strategic direction, oversight and success of CBA educational offerings, with a special emphasis on OnSite Relationship Management. Other long-time education team member Holly Braly will now serve as Director of Education Operations, responsible for oversight of all logistics supporting EBS and OnSite programs. We look forward to Brenda and Holly’s continued success in their new roles, and two new positions added to the mix: Director of the Executive Banking School and Vice President of OnSite Education.

Kraninger Nomination Moves to Senate: On Thursday, Senator Mitch McConnell filed cloture on Kathy Kraninger of Ohio to replace Acting Director Mick Mulvaney as Director of the Bureau of Consumer Financial Protection for a five year term. A final Senate vote is likely to take place the week after Thanksgiving.

Post-Midterms Congressional Update: On the election front, Republicans maintained control of the Senate – likely picking up one seat when all is said and done – and Democrats won a majority in the House. There are currently 31 Republican member-elects and 40 Democrat member-elects in the 116th Congress. House Republicans elected Rep. Kevin McCarthy to be Minority Leader and Senate Republicans elected John Thune to be Majority Whip. House Democrats do not pick leaders for a few more weeks, and House Minority Leader Nancy Pelosi is expected to seek further support to become speaker as word on the street is she does not have the votes.

POLITICO reported Ranking Members Waters is considering reorganizing the name and jurisdictions of several subcommittees. Her changes may include:

With the House flip, we expect upwards of a third of the House Financial Services Committee to be new to the Committee.

CBA’s GR team pulled together a handy slide deck (available here) taking a deeper dive into the result. Since the deck was prepared, Rep. Kyrsten Sinema was declared the winner in Arizona. She is a cosponsor of CBA-backed legislation in the House to create a bipartisan committee at the BCFP.

Quarles Testifies Before Congress: Federal Reserve Vice Chairman for Supervision Randy Quarles testified before both the House Financial Services Committee and the Senate Banking Committee this week. Below are key takeaways:

Bowman Confirmed to the Fed: On Thursday, Kansas State Banking Commissioner Michelle Bowman was confirmed as a member of the Fed Board of Governors by a Senate vote of 64-34. The seven-member board is now down to five after shrinking to as few as three in the past year.

Fed Stress Test Reform Update: Late last week, Federal Reserve Chairman for Supervision Randy Quarles announced the Fed’s proposal to integrate stress testing with the regulatory capital rule, known as the stress capital buffer (SCB), will likely not be implemented until the 2020 examination cycle. In April 2018, the Fed proposed using stress tests to set the bank’s capital requirements for the next year instead of using them to measure if a bank could survive an economic downturn. The changes were made to provide transparency and efficiency through the examination process.

BCFP Semi-Annual Guidance and Review: This morning, the Bureau published theirSemiannual Regulatory Agenda, as part of the Fall 2018 Unified Agenda of Federal Regulatory and Deregulatory Actions, as coordinated by the Office of Management and Budget under Executive Order 12866. This agenda anticipates having various regulatory measures considered from October 1, 2018 to September 30, 2019. The agenda notes the work done by the Bureau to implement the Economic Growth, Regulatory Relief, and Consumer Protection Act (EGRRCPA), such as implementing an interim final rule that adjusts certain model forms under the Fair Credit Reporting Act, and a procedural rule providing clarifications to the Home Mortgage Disclosure Act.

The Bureau notes they have added three additional EGRRCPA projects to its agenda:

The Bureau also noted they have added new rulemaking to its agenda to facilitate further implementation of a Dodd Frank Amendments to HMDA relating to the public release of HMDA data.

Other initiatives undertaken by the Bureau that are currently in the “Proposed Rule Stage” are:

The Bureau also published its Semi-Annual Review late last Friday covering the Bureau’s activities from October 1, 2017 to March 31, 2018. The report highlighted that credit products marketed to non-prime borrowers and secured credit cards were a significant problem for consumers. The report also highlighted data from its recent analysis of consumer complaints, and highlighted many of the rules and actions the Bureau plans to undertake in the near future, echoing the Bureau’s Spring Regulatory Agenda. The Bureau also reported that as of March 31, 2018, the Bureau had spent approximately $318.6 million in fiscal year 2018 funds.

BCFP Annual Financial Report: On Thursday, the Bureau released its Annual Financial Report. The report, covering the Bureau’s fiscal year dated October 1, 2017 to September 30, 2018 opened by noting the Government Accountability Office noted no material weaknesses and cited no issues of noncompliance with laws and regulations in their unmodified audit of the Bureau’s financial statements.

Some notable highlights from the report include:

CBA IN D.C.
CBA Wealth Management Working Group In-Person Meeting: While CBA fall in-person standing committee meetings have come to an end, we have our Wealth Management working group in town today! We kicked off this morning with a presentation from Equifax which led to robust discussion surrounding robo-advisors/offers, remote offerings in areas with no branch advisors, call center usage and small-dollar rule’s impact on wealth products. Before we adjourn, there will of course be a planning session for CBA LIVE 2019: The Currency of Now! Register today here.
INDUSTRY NEWS
Cincinnati Visit: Wednesday of this week I visited Fifth Third Bank in Cincinnati. I met with our new board member and2018 Digital Banker of the Year Tim Spence. We look forward to his input as he begins his tenure. It was also great to see former board member Phil McHugh, and long-time CBA family member Mark Erhardt. We will miss Mark’s input on our Deposits & Payments Committee but look forward to him continuing to serve on our Membership Council!
FDIC Works to Reverse Small-Dollar Lending Policy: On Wednesday, the FDIC released a request for information on small-dollar loan products, including ways to encourage FDIC-supervised institutions “to offer small-dollar credit products that are responsive to customers’ needs and that are underwritten and structured prudently and responsibly.”
In 2013, the FDIC and Office of the Comptroller of Currency issued guidance which effectively eliminated the ability of banks to offer a viable alternative to payday lending. The OCC has rescinded its guidance and the Bureau of Consumer Financial Protection is reviewing provisions of its payday rule, which was issued last year. So, this is a good step toward a much needed solution. The banking industry stands ready to help customers facing economic hardships and the FDIC should be commended for recognizing this critical consumer need. The full RFI and information on submitting comments is available here and CBA’s statement is available here.
NOTE: CBA wrote the FDIC in July encouraging the agency to rescind its small-dollar loan guidance. A copy of that letter is available here.

Buffet Ups Stake in Financials: During the third quarter, Warren Buffet’s Berkshire Hathaway increased its stake in financial institutions including 35.6 million shares of JPMorgan Chase & Co., added 198.24 million shares to Bank of America and added 38 percent to its position in Goldman Sachs. Chairman and CEO Warren Buffet of Berkshire Hathaway has publicly praised CEO Jamie Dimon of JPMorgan, but had never owned the stock and admitted it was a mistake not to invest in the bank. Read more here.

CBA Member-Banks Lead Wildfire Relief Efforts: Many CBA member-banks, including Bank of America, Bank of the West, U.S. Bank, JPMorgan Chase, Wells Fargo and CIT Bank are participating in disaster relief efforts from allowing ATM donations to the Red Cross to designated phone numbers for customers with financial concerns in the aftermath of California wildfires. The CBA Team extends thoughts and prayers to all affected member-banks and communities served in the area. Learn more about how CBA member-banks can help here.

STATE OF THE WEEK
CBA State of the Week: Our State of the Week is TENNESSEE, where more than 1 out of every 3 residents banks with a CBA member institution! CBA members in Tennessee hold $111 Billion in total assets, employ 25,000 people, provide $3 Billion in small business loans and serve 2.4 Million customers. Tennessee is also home to CBA member-banks: First Tennessee Bank HQ and independent bank (i-bank) HQ both in Memphis. 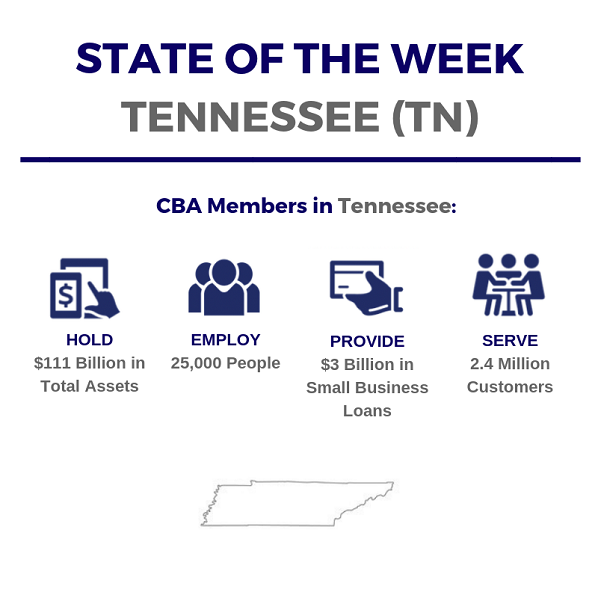