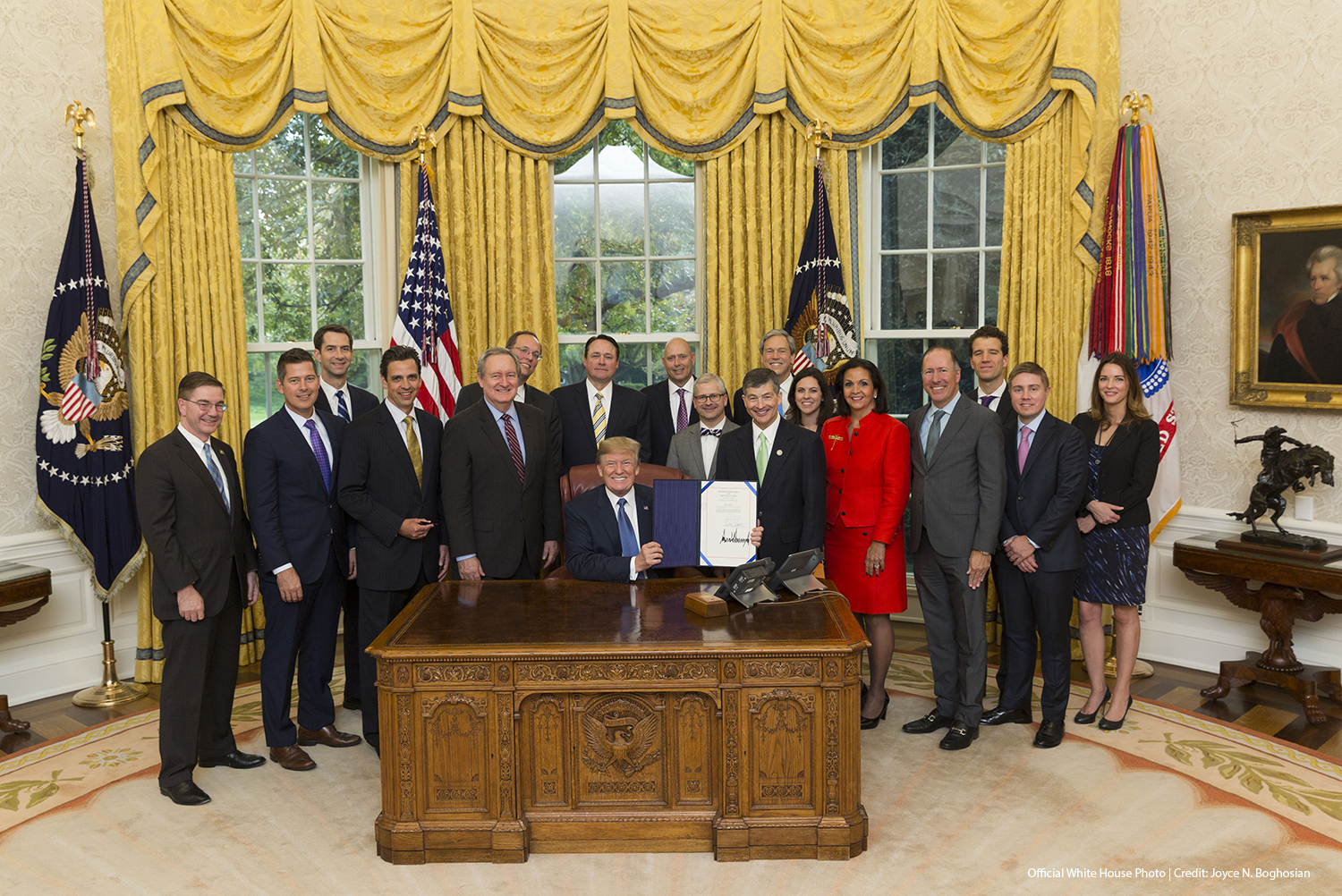 A big win for consumers occurred this past Tuesday when President Trump signed a resolution repealing the CFPB’s arbitration rule. If this rule had gone into effect, it would have harmed consumers. From the beginning the rule was never about protecting American consumers and the CFPB’s own study backs that up. The only people that would have been protected were trial lawyers and their wallets. CBA’s Kris Fallon and I attended the bill signing in the Oval Office of the White House. We personally thanked the members of the Administration and Congress in attendance for their work protecting consumers.  To be candid, this was the first bill signing I have attended in over nine years and I hope for more commonsense, balanced legislation to be signed into law in the coming years. 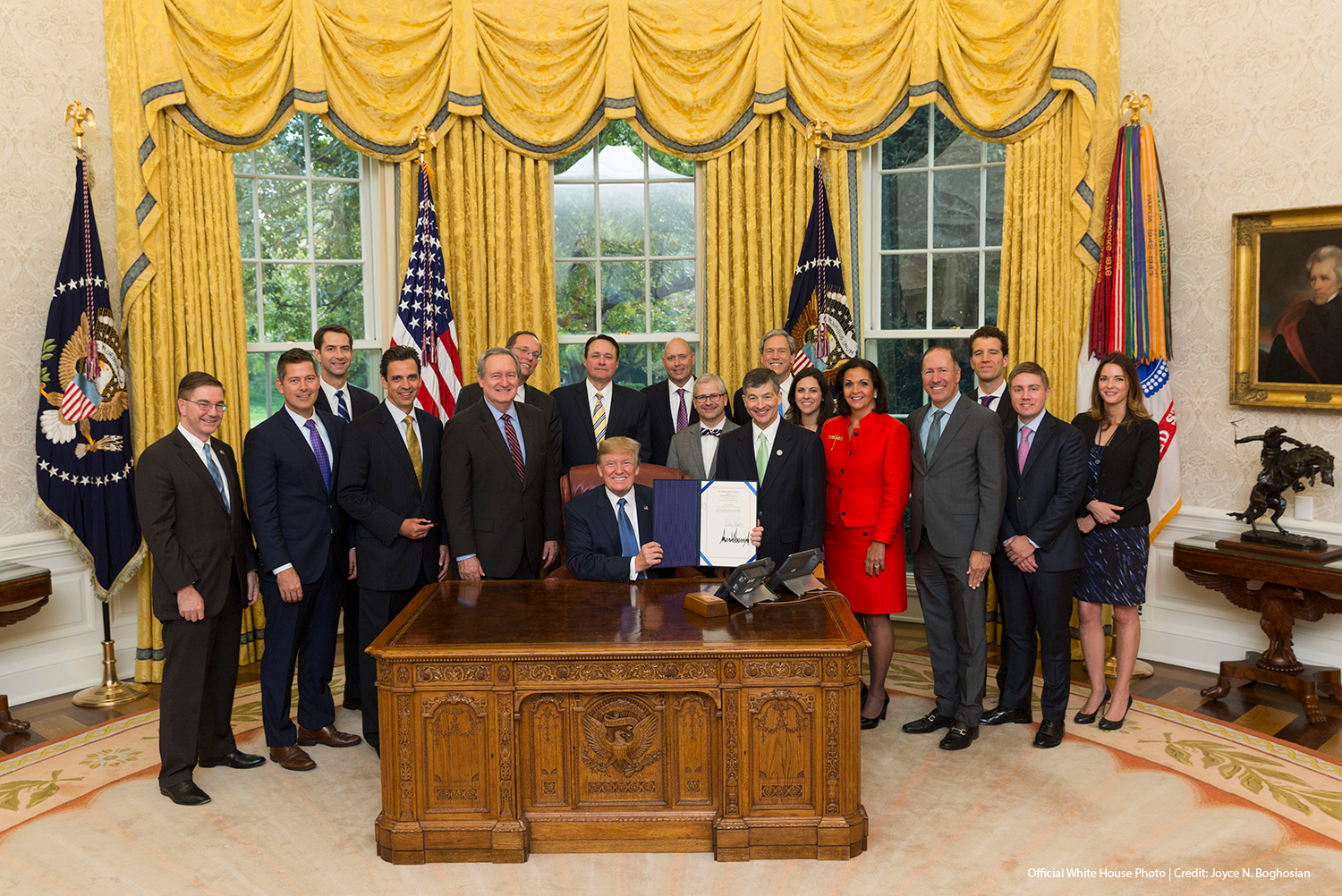 Senate Banking Committee Chair Mike Crapo (R-ID) and moderate Democrats have vowed to push ahead with financial reform despite Senator Sherrod Brown (D-OH), the committee's leading Democrat, backing out of talks. It is encouraging some Senators are willing to reform our financial laws to help consumers. Like any law or regulation, Dodd-Frank must be revised and modernized. We encourage Members of Congress to enact meaningful reforms, such as activity-based SIFI designations and a CFPB commission.

As we covered in last week’s Rapid Fire, Winter Park National Bank was the first full-service de novo national bank charter since the financial crisis. In an op-ed published in the American Banker, Acting OCC Comptroller Keith Noreika argued the process to obtain a bank charter is more onerous, lengthy and costly than it needs to be. He made the case for streamlining the process so it can work more efficiently and provide quicker turnaround on applications.

Yesterday was a busy day for the industry here in Washington. At one end of Pennsylvania Avenue, President Donald Trump officially nominated current Federal Reserve Governor Jerome Powell to succeed Janet Yellen as Federal Reserve Chair, whose term as chair expires at the end of January 2018. At the other end of Pennsylvania Avenue, House Republicans unveiled their tax reform plan. Of note, the House bill calls for repealing the deduction for FDIC Deposit Insurance Fund assessments for banks with more than $50 billion in assets but would drop the corporate tax rate from 35% to 20%. We are continuing to study the impact this change would have. For more details, you may read an analysis from the CBA Team.

CFPB Picks Which Consumers to “Protect”

In case you missed my column in The Hill today, I broke down how the CFPB’s small-dollar rule treats consumers who deal with some institutions differently than others. The CFPB, with this rule, embarked on a path towards picking winners and losers by limiting consumers’ options. At the end of the day, this is just further evidence as to why a Senate-confirmed, bipartisan commission is needed at the CFPB. You may read my op-ed here.

Additionally, the New York Times ran an article which criticized banks for high consumer debt. In response, I penned a letter to the editor to showcase banks’ commitment to their customers and your efforts to ensure consumers are well-equipped to repay their loans.

I was humbled to receive a “Top Lobbyist” designation from The Hill this week but these awards are never won by any single individual. This was a total team effort at CBA, each and every team member contributed to this honor. I am privileged to be surrounded by such a great group of people, and such an active and supportive membership.

CBA’s Mid-Tier Retail Executive Forum joined us at CBA World Headquarters this week, and here is some of what we learned:

Thank you to Jeff Richardson and Nick Rose of VantageScore and Lindsay Soergel of Equifax for meeting with the group.

The Department of Education has begun offering early retirement and voluntary separation incentive payments to eligible employees in the Office of Federal Student Aid. Those who accept the Department’s offer would serve through the end of 2017. This move complies with President Trump’s executive order for agencies to streamline their activities and comes at a time when the Office of Federal Student Aid is looking to shake up the status quo.

Three Things To Know To Be In the Know

Consumer bureau harms Americans when it picks the winners and losers

Regions Bank’s “What a Difference a Day Makes” program kicked off this month, and it will provide financial and volunteer support to 16 innovative nonprofits serving people.

House Financial Services Chairman Jeb Hensarling announced he will not seek re-election in 2018.