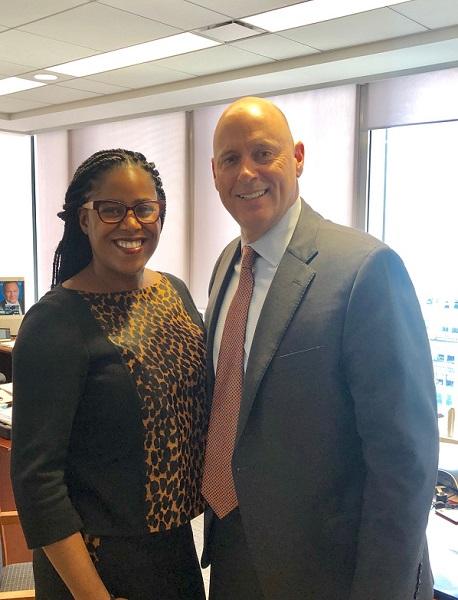 Kraninger Procedural Vote: On Thursday, the Senate invoked cloture on Kathleen Kraninger’s nomination to become Director of the Bureau of Consumer Financial Protection. A final vote on her confirmation is expected next week and will likely pass with a party-line vote. We sent a letter supporting the confirmation of a Director and restating why a bipartisan commission is needed. Below is an excerpt read before the vote by Senate Banking Committee Chair Mike Crapo:

Meeks To Be ‘Bridge Builder’: Rep. Gregory Meeks (D-NY) announced his aspiration to be a“bridge builder” between consumer advocates and the financial services industry. This is a great step in the right direction! Rep. Meeks is looking to lead the House Financial Services Committee subcommittee focused on consumer protection, and with this outlook we could see some real positive, commonsense regulation move forward. He is also a sponsor of legislation creating a bipartisan commission at the Bureau.

BSA/AML Hearing: On Thursday, the Senate Banking Committee held a hearing on the Bank Secrecy Act (BSA), the USA PATRIOT Act, and related anti-money laundering (AML)laws and regulations. This week, Senior Vice President of Congressional Affairs Sam Whitfield and I spoke with American Banker about how to improve existing BSA/AML rules and regulation. CBA also sent a letter to the committee in advance of the hearing offering several ways to improve BSA/AML rules and regulations. You can read more here.

Pelosi Retakes Speaker Gavel: On Wednesday, Democrats voted to nominate currentMinority Leader Nancy Pelosi (D-CA) as the next House Speaker by a vote of 203-32. A full floor vote will take place on January 3, 2019, and those 32 votes could prevent her from becoming Speaker. Will be interesting to see what unfolds.

Chairman McWilliams Discusses FDIC Approach: Chairman Jelena McWilliams of theFDIC spoke at an industry event this week. Some of her key takeaways are below:

Bureau Ombudsman’s 2018 Annual Report: On Thursday, the Bureau’s Ombudsmanreleased the 2018 Annual Report to the Director. The report summarizes the Ombudsman’sactivities during fiscal year 2018, including how the Office helped stakeholders engaging in theBureau’s RFI processes, provided technical assistance to companies responding to consumer complaints, and assisting consumers recognize financial fraud.

In the report, the Office outlines several of its new outreach activities, including hosting office hours at a conference and developing a new brochure for the office to share about its available resources. The report also includes information on the various internal outreach done by theOmbudsman’s office, including monthly meetings with the directors and executive team aimed at educating the new leadership team at the Bureau.

Bowman Sworn in to Fed: Banking Commissioner of Kansas Michelle Bowman was sworn in as a member of the Federal Reserve Board of Governors on Monday. Ms. Bowman is the first person to ever fill the community bank seat, and her position brings the Board of Governors count to five of seven members. President Trump’s nomination of EconomistsMarvin Goodfriend and Nellie Liang remain up in the air for the other two slots.

Buffett Big on Big Banks: Warren Buffet’s Berkshire Hathaway has bought or increased stakes in JPMorgan Chase, Bank of America, Goldman Sachs and PNC. The company now holds stakes in seven of the country’s top 10 banks. If you believe the Oracle, this shows how strong the industry really is!

Zack Bishop Joins Synovus: On Monday, Synovus announced the appointment of Zack Bishop as EVP of Technology and Operations, spearheading the bank’s digital banking efforts. Prior to joining Synovus, Bishop served in a similar role as EVP and CIO at Renasant Bank, where he was responsible for all digital, electronic and internet operations. The CBA team looks forward to Synovus’ continued commitment to tackling digital banking challenges and opportunities as consumer wants, needs and demands continue to evolve. Congratulations,Zack!

Dems Pause Talk of Free College: In campaigns to retake Congress, Democratic candidates notably moved away from mention of “free college.” If policymakers fail to find ways to make college more affordable, then we are simply addressing the symptoms of a much bigger problem and allowing it to snowball, to the detriment of our nation’s youngest citizens. One option would be increasing the market-share of responsibly underwritten private student loans. CBA believes there is a role for the federal government in the student lending market, but there are critical differences between private loans – which have a more than 95 percent repayment rate – and the double-digit default and delinquency rate of federal loans, which are often serviced by private non-bank companies.

Former BCFP Student Loan Ombudsman Seth Frotman started a new advocacy group with several former BCFP officials to “to fight the Trump administration and the student loan industry over protections for borrowers.” We are eager to work with any group ready to address skyrocketing tuition and student debt, but you have to start with the facts: federal over lending and opaque disclosures associated with federal loans are major contributors to the nearly $1.5 trillion in student debt. Federal loans account for about 92 percent of all outstanding student loan debt and federal student loan debt has more than doubled since 2009 (increasing 66 percent since 2011, the year the Bureau opened its doors).

New York Trip: Monday and Tuesday of this week I visited with CBA member-bank JPMorgan Chase, Premier Sponsor Novantas, Diamond Sponsor BCG, CNBC and American Banker to discuss post-election Washington, D.C. in addition to CBA’s 2019 priorities. It was great to catch up with CBA LIVE 2019 Speaker & Consumer Banking CEO Thasunda Duckett ofJPMorgan Chase, Rick Spitler of Novantas and Laurent Desmangles of BCG. Some robust conversations about the year ahead.

November Birthdays: As I mentioned last week, Thanksgiving is one of my favorite times of the year as I share it with friends and family, but it is also when my birthday falls! Another year older, another year wiser…Happy birthday to CBA Team members Dave Pommerehn and Jake Fowler who are also November babies! We celebrated at CBA HQ with a delicious breakfast on Wednesday.

City of Boston Credit Union Doubles Its Reach in 2018

Spirit of Texas Bancshares, Inc. to Acquire First Beeville Financial Corporation and Its Subsidiary, the First National Bank of Beeville

CBA State of the Week: Our State of the Week is NEW YORK, where more than half of all residents bank with a CBA member! CBA members in New York hold $2153 Billion in total assets, employ 191,000 people, provide $38.1 Billion in small business loans and serve 10.1 Million customers. New York is also home to CBA member-banks: JPMorgan Chase, Citi, Five Star Bank, HSBC US, M&T Bank & MUFG Union Bank. Check out our state by state numbers here.