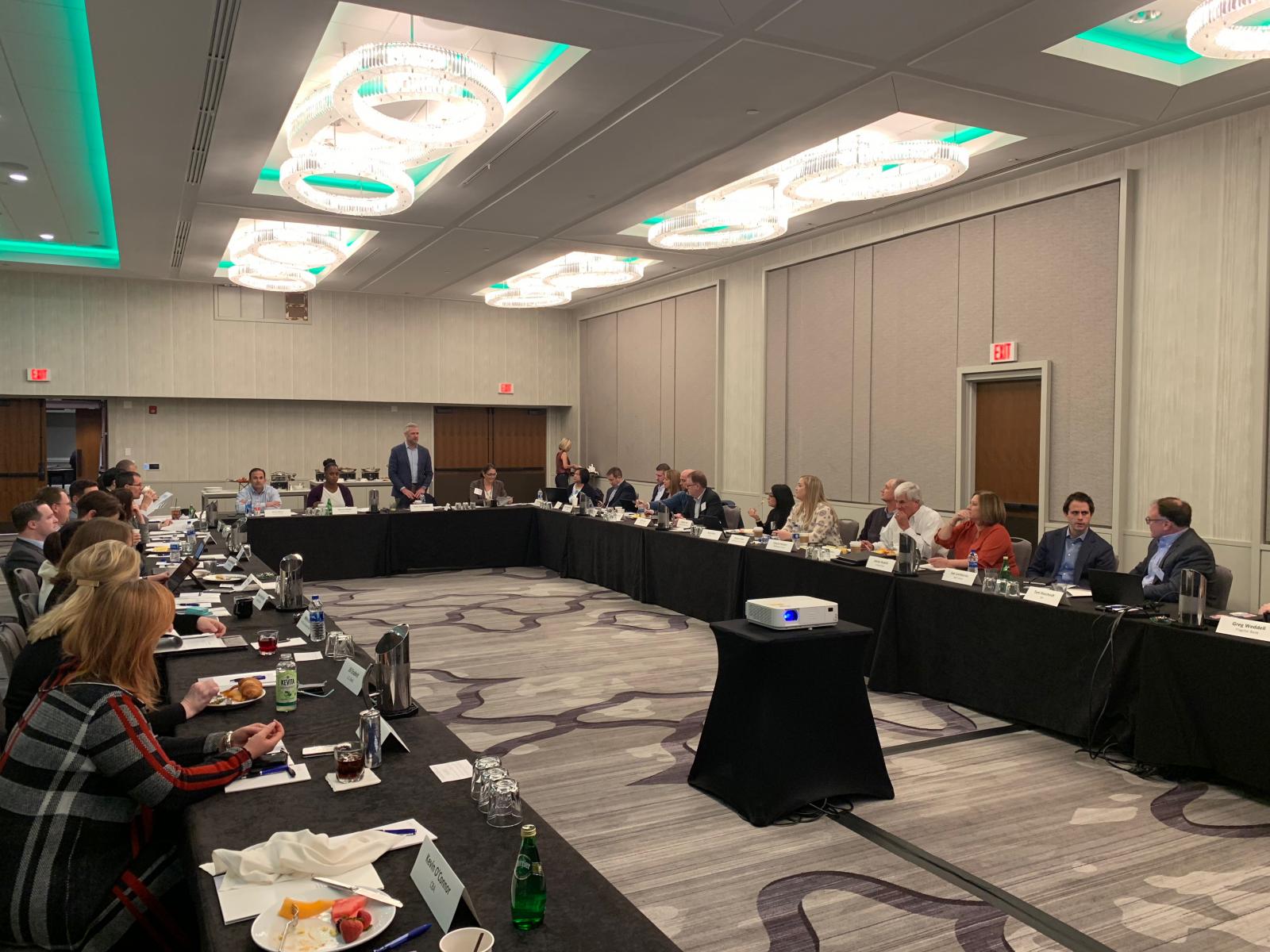 Cajun Thoughts: I absolutely love and respect America’s democratic process. The fact any citizen, regardless of background, has the right to elect our leaders gives me chills each and every time. I am especially fortunate to be surrounded by a diverse CBA Team of different political ideologies and willing to share their views with me in an open and candid dialogue (as long as they are pro-banking, of course). Arguably, my favorite day at CBA was when Mitslal Girmay of our accounting team was sworn in as a U.S. Citizen and her story of voting for the first time. God bless our Country!

On to the election....with California's Maxine Waters taking over as Chairwoman of the House Financial Services Committee, expect “Reputation headline risk” for CBA member-banks, and few, if any, substantive legislative bills. Also, watch for Carolyn Maloney to push forward overdraft reform once again. Looks like Congressman Patrick McHenry of North Carolina will be the Ranking Member on House Financial Services Committee. Rep. McHenry has met with our leadership several times over the years and definitely has deep knowledge of the banking industry. Here is a tidbit to ponder on… a third of the Democrats on the committee will be new. This means CBA will spend the next few months getting everyone up to speed on CBA priorities and the benefits of retail banking.

After all the votes are counted in the Arizona Senate race, I expect Democrat Kyrsten Sinema to be the winner. As you may remember, she is the lead Democrat sponsor of a CBA-backed bill to create a bipartisan commission at the Bureau of Consumer Financial Protection.

On the Senate side, expect this to be the graveyard where House bills will be buried. If the Republicans do indeed reach 54 seats – though 52 is looking more likely, it is almost a guarantee they will be in the majority for at least four more years given the 2020 landscape.

The election returns will have no impact on regulatory right-sizing by the prudential regulators, as they are independent agencies. I do expect Kathy Kraninger to be confirmed as Director of the Bureau of Consumer Financial Protection by Christmas.

Dems Take The House: For the fourth time since 1992, the House of Representatives has flipped, underlining why trade groups need bipartisan teams. A divided government is generally more conducive to bipartisan policymaking, and can produce major accomplishments on common-sense legislative proposals as well as regulatory reform. Many of CBA’s priorities, including the creation of a bipartisan commission at the Bureau of Consumer Financial Protection, have received support from both sides of the aisle.

Social media keeps all past events alive…People are appealing to their bases instead of drafting bipartisan legislation. My biggest concern for the financial services industry in the aftermath of the Midterm Elections is reputational headline risk and gridlock. Most of CBA’s work in 2019will be on the regulatory side as opposed to the legislative side...We held a call with CBA Members on Wednesday to go over what it all means. You can view our slide deck here.

Here are some other key takeaways:

Her agenda will focus on:

We expect Chairwoman Waters to run the Committee in a style similar to current RepublicanChairman Hensarling in a top-down approach to limit subcommittee chair's from moving legislation she might not agree with.

While Chairwoman Waters is from the liberal wing of the Democratic Party, many of the newly elected Members of Congress did not campaign as such.

With the House flip, we expect upwards of a third of the House Financial Services Committeeto be new to the Committee.

Similar to the House Financial Services Committee, there will be new faces on the Senate Banking Committee.

We expect Committee leadership to remain the same with Chairman Crapo and Ranking Member Brown. Some have mentioned Chairman Crapo could take the Finance Committee gavel, but Senator Grassley - the current chair of the Judiciary Committee - has more seniority on Finance and two years left to serve as chairman per Senate rules.

At Banking, Chairman Crapo is expected to focus on:

CBA Deposits & Payments In-Person Committee Meeting: This week CBA’s Deposits andPayments Committee held its in-person meeting in D.C. led by Chair Kevin Condon with Bank of America and Vice Chair Desiree Wolfe of Webster Bank. We kicked off the meeting with introductions, general committee business. There was some robust discussion around BAI deposit trends and the committee heard from Andrew Frisbie, Adam Stockton and Vladana Zlatic of CBA Premier Sponsor Novantas regarding the battle for deposits. It appears big banks are taking the lion’s share while online-only banks are offering higher rates. Also, the CD might be back as interest rate hikes outweigh the benefits of liquidity for many. Gary Stein of theBureau of Consumer Financial Protection also presented to the committee which led to an awesome around the horn discussion of regulatory/legislative reform, election results, fraud and emerging technologies like Zelle and mobile wallets. As always, the committee continued CBA LIVE forum planning…Register TODAY for *CBA LIVE 2019: The Currency of Now* here.

CBA Mid-Tier Retail Executive Forum: We also have CBA’s Mid-Tier Heads of Retail in town today, providing a unique space for CBA member-banks with $10-50 billion in assets to network and share best practices with peers. Our in-person meeting kicked off this morning with a business discussion led by Forum Chair and CBA Chair-Elect Chair Nitin Mhatre of Webster Bank. We covered hot topics such as branch transformation, fintech, CRA, customer segmentation, and mortgages. Other topics of interest include fraud and talent management. The forum heard from guest speaker Dan Smith of the Bureau of Consumer Financial Protection and had a presentation from Frank Rohde of Forum Sponsor Nomis Solutions.

Small Dollar Compliance Date Delayed: U.S. Federal Judge Lee Yeakel extended theAugust 2019 compliance date for the Bureau of Consumer Financial Protection’s small dollar lending rule. Study after study have shown about half of American families cannot cover emergency expenses. We have requested a delay to prevent bank customers from being forced to rely on less regulated or unregulated sources of income like online lenders, check cashers or pawnshops while the Bureau completes its review.

In Case You Missed It: Yesterday, American Banker published my op-ed on key reforms the banking industry believes would improve and modernize the Community Reinvestment Act. In the piece, I note how key reform principles will help ensure the more than $100 billion banks invest each year to low – and moderate – income neighborhoods goes where it is most needed. Stay tuned for comments from CBA’s 50-member Community Reinvestment Committee on behalf of the nation’s leading retail banks to the OCC’s ANPR later this month.
INDUSTRY NEWS

Looming Demise of Deregulatory Agenda: Founder and CEO Gene Ludwig of CBASapphire Sponsor Promontory Financial Group penned an op-ed for American Bankerdiscussing a number of reforms for regulatory agencies, banks and banking trade groups to focus on before the deregulatory period inevitably ends. This is a hot button topic for the financial services industry. Tailoring costly provisions would allow many U.S. banks to free up capital for consumers and small business loans instead of diverting funds to pay for compliance costs that do not contribute to economic growth. Regulations should absolutely protect consumers from unfair, deceptive or abusive practices – but they should also allow banks to best serve their customers.

JPMorgan Spreads UD Money to Paris: JPMorgan Chase announced its contribution of $30 million over five years to urban development programs teaching job skills and expanding small businesses in Seine-Saint-Denis and other places with high unemployment and poverty. Currently, JPMorgan employees located in Paris work solely in investment banking, money management and capital markets – low-income individuals or small businesses could be the first to benefit from this expanded effort. More here.

John Dugan to Lead Citigroup Board: Former Comptroller of the Currency John Dugan was named Chairman of the Board of Directors of Citigroup, to take effect January 1, 2019. Prior to serving as director at Citigroup for the past year, John was a partner at Covington and Burling LLP and chaired the firm’s Financial Institutions Group, demonstrating his many talents as a lawyer and leader within the financial services industry. CBA’s Board of Directorsmet with John a few years ago to hear his unique insights and road-map for navigating the current regulatory environment. The CBA Team is excited for John to take on this new position and will continue to support his commitment to the financial services industry. Congratulations!

Wages Hikes Payoff for Banks: We all know banks have a good story to tell, but it is not often the personal side of banking is highlighted. American Banker looked at the benefits many ofCBA’s member-banks have seen as a result of increasing minimum wages for employees. PNCreports lower attrition rates as a result and Fifth-Third says there has been a 24% decline in turnover among retail staff. In a tight labor market, keeping the best staff is critical. Long-term employees provide a hiring pool for promotions, but it also helps front-line employees build deep relationships with clients – a win for the bank and your customers. Keep up the good work!

Prior to joining TIAA Bank in 2014, Janine was Vice President of Internal Audit for CBA premier sponsor Black Knight where she designed the company’s internal audit function. Earlier in her career, Janine held finance and audit positions with Blue Cross and Blue Shield of Florida, the PGA TOUR and PwC.

With a home base in Jacksonville, Florida and University of North Florida as an alma mater, Janine is a forever Floridian. While we say goodbye to previous committee chair Dan VanSciver of Sallie Mae, the CBA team looks forward to Janine’s success in this new leadership position – which was already demonstrated by the successful in-person meeting last week!

Amazon HQ2 Update: Amazon.com Inc. plans to open two equal-sized office locations rather than one for its second headquarters. There will be approximately 25,000 employees in each of the two offices, in addition to the company’s Seattle headquarters. The spots are rumored to beCrystal City, home of my personal favorite Chick-Fil-A, and Long Island City…A final deal could be reached any day now… Will be interesting to follow this development! More here.

CBA State of the Week: Our seventh State of the Week is MICHIGAN, where our banks serve more than half of all Michiganders! CBA Members in Michigan hold $251 Billion in total assets, employ 40,000 people, provide $5.5 Billion in small business loans and serve 5 million customers. Michigan is also home to CBA members: Ally Bank HQ in Detroit and Flagstar Bank HQ in Troy.